Three books this week, one of which is a great sourcebook for the Pathfinder RPG...have a look, won't you? 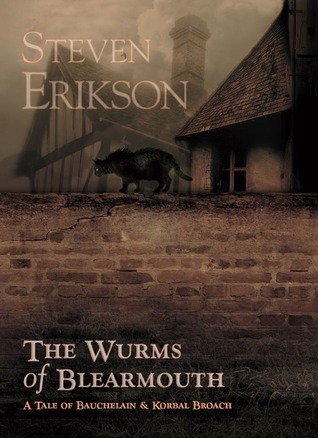 A new novella from New York Times bestselling author Steven Erikson, set in the world of the Malazan Book of the Fallen, The Wurms of Blearmouth.

Tyranny comes in many guises, and tyrants thrive in palaces and one-room hovels, in back alleys and playgrounds. Tyrants abound on the verges of civilization, where disorder frays the rule of civil conduct and propriety surrenders to brutal imposition. Millions are made to kneel and yet more millions die horrible deaths in a welter of suffering and misery.

But leave all that behind and plunge into escapist fantasy of the most irrelevant kind, and in the ragged wake of the tale told in Lees of Laughter’s End, those most civil adventurers, Bauchelain and Korbal Broach, along with their suitably phlegmatic manservant, Emancipor Reese, make gentle landing upon a peaceful beach, beneath a quaint village at the foot of a majestic castle. There they make acquaintance with the soft-hearted and generous folk of Spendrugle, which lies at the mouth of the Blear River and falls under the benign rule of the Lord of Wurms in his lovely keep.

Make welcome, then, to Spendrugle’s memorable residents, including the man who should have stayed dead, the woman whose prayers should never have been answered, the tax collector everyone ignores, the ex-husband town militiaman who never married, the beachcomber who lives in his own beard, the now singular lizard cat who used to be plural, and the girl who likes to pee in your lap. And of course, hovering over all, the denizen of the castle keep, Lord—Ah, but there lies this tale.

Promise of Blood (Book Two of The Powder Mage Trilogy) by Brian McClellan (Orbit Hardcover / eBook 05/06/2014) – Second book in the series, the first of which I thought was the best fantasy debut novel I read last year.

When invasion looms, but the threats are closer to home…Who will lead the charge?

Tamas’ invasion of Kez ends in disaster when a Kez counter-offensive leaves him cut off behind enemy lines with only a fraction of his army, no supplies, and no hope of reinforcements. Drastically outnumbered and pursued by the enemy’s best, he must lead his men on a reckless march through northern Kez to safety, and back over the mountains so that he can defend his country from an angry god, Kresimir.

In Adro, Inspector Adamat only wants to rescue his wife. To do so he must track down and confront the evil Lord Vetas. He has questions for Vetas concerning his enigmatic master, but the answers might lead to more questions.

Tamas’ generals bicker among themselves, the brigades lose ground every day beneath the Kez onslaught, and Kresimir wants the head of the man who shot him in the eye. With Tamas and his powder cabal presumed dead, Taniel Two-shot finds himself as the last line of defense against Kresimir’s advancing army. Inner Sea Gods (A Pathfinder Campaign Setting) edited by James L. Sutter (Paizo Hardcover 04/30/2014) – These Pathfinder RPG hardcover books are beautiful looking and chock full of monsters and magic. I’ve been s-l-o-w-l-y incorporating elements of the world into the gaming group I’m part of, though I wish we could play more often.

Unleash the Power of the Gods!
Through the miracles of priests and the weapons of crusaders, the deities of the Pathfinder Roleplaying Game command unrivaled influence over the lands of the Inner Sea. Tap into their incredible might with Pathfinder Campaign Setting: Inner Sea Gods! Inside you’ll discover the deepest secrets of an entire pantheon of incomparable beings, claim relics suited to both sinners and saints, and wield immortal might as a character of any background, race, or class. No longer does the favor of the gods belong to clerics, paladins, and other divine spellcasters alone—choose your faith and make holy power your own!
This volume expands upon the world and religions detailed in Pathfinder Campaign Setting: The Inner Sea World Guide. Inside this tome of mysteries, you’ll find: