This is a bit of an expanded version of my review/Hugo Appreciation Post for Mira Grant's Parasite, which originally appeared on Tor.com on July 25, 2014. 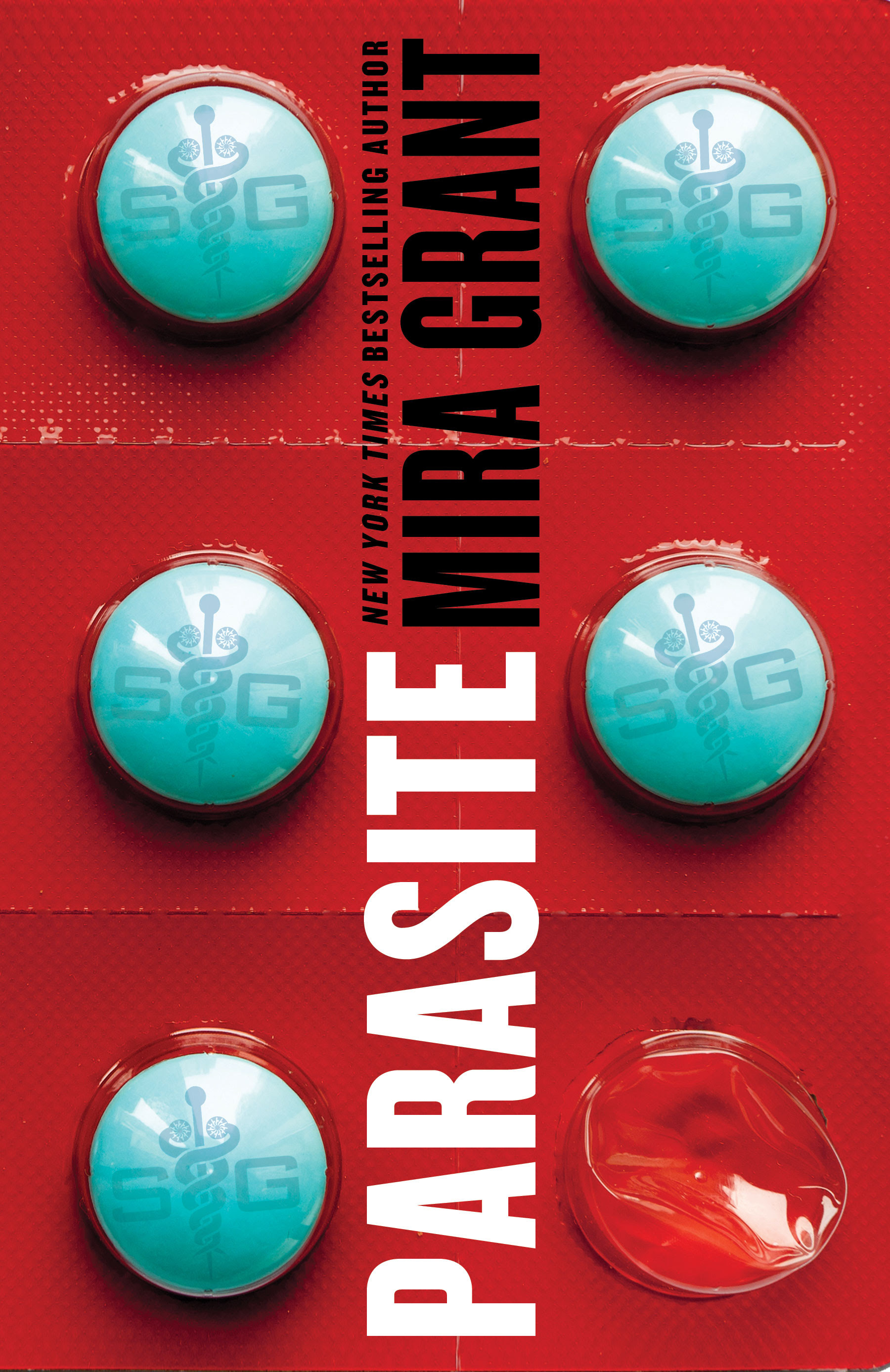 Mira Grant (aka Seanan McGuire) has achieved a level of notoriety many authors would hope to achieve, she has many fans and her books can often be found on awards ballots, her 2013 novel Parasite is no exception. While her Newsflesh trilogy (FEED, DEADLINE, BLACKOUT) was published as mass market paperback, Grant was promoted to hardcover for Parasite.

Admittedly, the central conceit of Parasite is a large pill to swallow, faith while leaving some logic at the door. In Grant’s near future thriller, the majority of the world has ingested an Intestinal Bodyguard, a tapeworm parasites to help our weakened immune systems. On top of that, all the tapeworm parasites people have ingested are controlled by one company – SymboGen. So yeah, if you can get past those two large grains of salt for the plot’s conceit, I would suggest you hold on because Grant does unfurl a very briskly paced narrative in Parasite.

Grant seems very comfortable utilizing the first person narrative; she did so in her Newsflesh trilogy and here in Parasite employs the first person to tell the story through the voice and experience of Sally “Sal” Mitchell. Sal is a young woman who has miraculously recovered, thanks to her SymboGen implant, from a vehicular accident that left her in a coma. Parasite opens about six years after Sal awakens having relearned how to function in society. Simple things like talking, walking, and the basic tenets of living had to be relearned. She is also a ward of her parents (her father conveniently works as an epidemiologist for USAMRIID, the US Army’s Infectious Disease unit), who treat her like a child. Her sister, Joyce (also conveniently an epidemiologist like her father) seems to like the new Sal better than the previous incarnation of her sister. In a sense, Sal is only 6 years old, but she won’t hear any of that. She has a job at working with animals, a boyfriend (Nathan Kim, who conveniently is a doctor specializing in parasites), and she is required to report in with SymboGen, specifically the head of the company Dr. Steven Banks, and a psychiatrist so her mental and physical health can be monitored.

Sal yearns to be more independent, apart from her parents and not under such scrutiny from SymboGen. She begins to see strange things: people are becoming mindless sleepwalkers (NOT ZOMIBES); sometimes violent but definitely not themselves. First a young girl and her parent, then a man and his dog, at which time Sal’s affinity towards animals comes into play. She calls the dog, Beverly, away from its shambling (NOT A ZOMBIE) owner and effectively gains a four-legged companion. These transformations from people into (NOT ZOMBIES) “sleepwalkers” continues and escalates as the novels progresses.

In SymboGen, Grant has given us the requisite not-so-benign Medical MegaCorp. The majority of the chapters are prefaced with quotes from “interviews” with SymboGen’s Steven Banks and an unpublished autobiography of co-founder Dr. Shanti Cale who has disappeared. The third founder, Richard Jablonsky, committed suicide prior to the events of the novel. So yeah, that all makes for quite a shady organization. Many chapters are also prefaced with quotes from a fictional and very creepy children’s book Don’t Go Out Alone. (I for one would buy a fancy limited edition of Don’t Go Out Alone should it come into existence).

Grant unpacks a lot of the science behind the tapeworms through character dialogue and it mostly works, though the frenetic pacing before such scenes pushed me to read through those passages very quickly and to re-read them. I said earlier that there’s the leap of logic over a grain of salt required to fully absorb oneself in Parasite, and I would also suggest that that one stick the coincidences alongside that large grain of salt. There are quite a few conveniences with the characters; most prominently that Sal’s father is high up in the military division responsible for defensive / countermeasures against biological warfare where sister Joyce also works. Her boyfriend just happens to have a strong connection in the world of parasites and later familial connections which are revealed come across as very convenient.

There was one particular scene of (NOT ZOMBIES) sleepwalkers giving Sal some problems when she was home alone with her new dog Beverly that was very effective. Grant captures an extremely claustrophobic feel in that scene, which also highlighted just how helpful a loving, protective dog could be in such a situation. This was in the latter half of the book, and the emotional fallout, as well as the story fallout as a result of that scene ratcheted up the tension for the remainder of the novel.

Having read and enjoyed the Newsflesh trilogy there were quite a few familiar beats in the novel. Sal could be an analogue to George/Georgia (Newsflesh’s protagonist) and Tansy felt like a cousin to Becks. That said; the character whom Tansy felt most similar to on a larger comparative scale is Harley Quinn, the Joker’s girlfriend/sidekick. The other thing that I found frustrating is the lack of the word Zombie. The “sleepwalkers” exhibited all of the signs associated with zombies, from the shambling to the attacking. On the other hand, the great film 28 Days Later also eschewed such strict zombie classification. Lastly, this novel, more than any I can recall reading (at least recently) ends like a freight train zooming at high-speed into a gigantic wall. The pacing was moving along very quickly for much of the last half just before a Kick-WHAM reveal and the novel ends to the point where I wonder if this was one book awkwardly split into two.

I will say that Grant has a powerful narrative that managed to pull me through its twists and turns regardless those above-mentioned quibbles. Parasite is an at times fun, at others, frustrating read. It is equal parts horror, conspiracy thriller, and science fiction novel with a large influence of Stephen King in its text. (Grant/McGuire, like myself, is a big fan of Stephen King). I found myself reading the book very quickly, being absorbed in the story, and enjoying what I read as I read it, so on the whole I’d say Parasite was a successful book for me.

Is it worthy of a Hugo though? That’s an easier question, I don’t think so. Like Charles Stross (also on this year’s ballot), it seems Grant’s name is almost an automatic thing on awards ballots in recent years. Science/biology/parasitology is such a large component of the novel, so it fits the genre mode. But the size of the grain of salt in the adage of “take it with a grain of salt” as it relates to the central conceit (the majority of the world happily ingesting tapeworm parasites) in Parasite, I think, is far too large. The narrative pulled me along, but I’m not sure Parasite will stand with me for a long time afterwards. While an enjoyable novel, it isn’t one that to me says Award Winner.

Review post-script/confession:  I really enjoyed Grant's Newsflesh trilogy when I read them, I found them gripping page turners in the truest sense. The narrative pull of the novels allowed me to overlook some of the quirks of the books.  I'll admit reading other people's reviews of Grant's work, as well as listening to some podcasts where her work was discussed, sort of put me off diving into Parasite immediately. Those reviews and podcasts pointed out some of those quirky elements I'd overlooked because the narrative pull of the books. I felt those reviews/podcasts called into judgement my (for lack of a better term) credibility as a reader and reviewer.  However, Parasite pulled me in quite quickly even despite some of the "quirks" I mentioned above (major coincidences and the fact that the word Zombie is not uttered in the novel).
at 8/08/2014