New York Comic-Con 2014 is marks the third time I’ve attended the convention, and the second year in a row I’ve attended with press pass. This year, 2014, is also the first year wherein I’ve attended three days. The owners of the comic shoppe where I get my stash have been friends with my wife’s family for quite a while; Leslie’s mother worked with the owner’s father. So Leslie helped staff their double booth on Sunday and as such, she was given an exhibitor pass so she went with me on Saturday, worked the booth on Sunday, and she let her brother use the exhibitor pass so he could go with me on Friday.

So wow, this event seems to grow each year but I was surprised Friday, in terms of the crowds and the fact that there was cool air blowing through. So, he (Mike) and I walked the hall a little bit in the morning when we arrived before the Geek Geek Revolution panel I wanted to attend. Mike is much more into video games than I am, so he checked out their booths and some other things while I headed down to the back of the Javits Center for the GGR panel. Waiting on line for it, I saw Jennie Ivins and the man known on twitter as SheckyX, so we chatted as we entered the panel and they both introduced me to Garrett from Ranting Dragon. Big thanks to Jennie for securing a few seats for us in one of the first couple of rows. 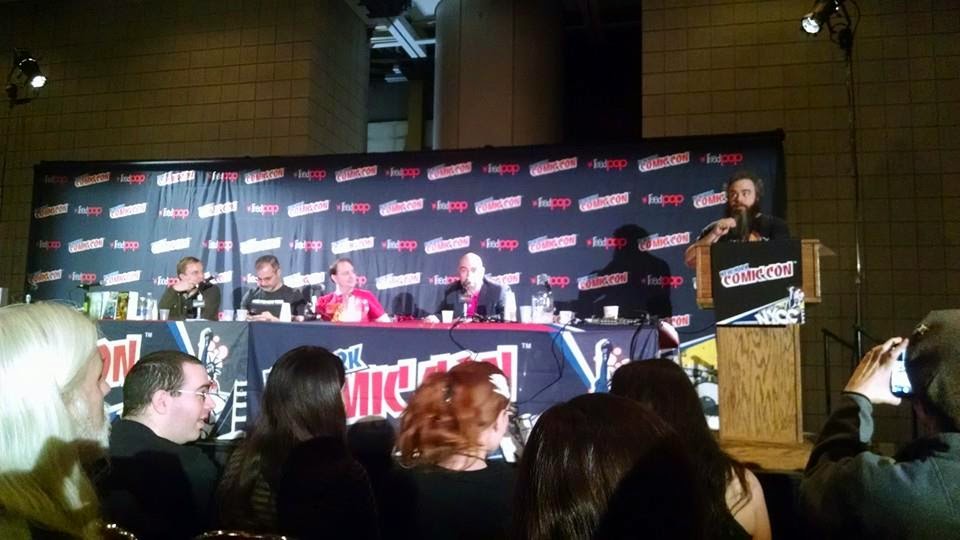 The Geek Geek Revolution panel was essentially a geek trivia challenge and featured John Scalzi, Peter V. Brett, Amber Benson, Maureen Johnson, Lou Anders, and M.D. Payne. The panel was moderated by Patrick Rothfuss. Amber and Maureen set Scalzi in their sights, but when Amber didn’t raise her hand before Scalzi on the Buffy questions, the winner was pretty much set from there. Should Rothfuss ever decided to foolishly give up his writing career, he'd be a great game show host. Damn can that man project his voice.

Afterwards, I got a few books signed, including The Daylight War by Peter and my ARC of Name of the Wind by Patrick. 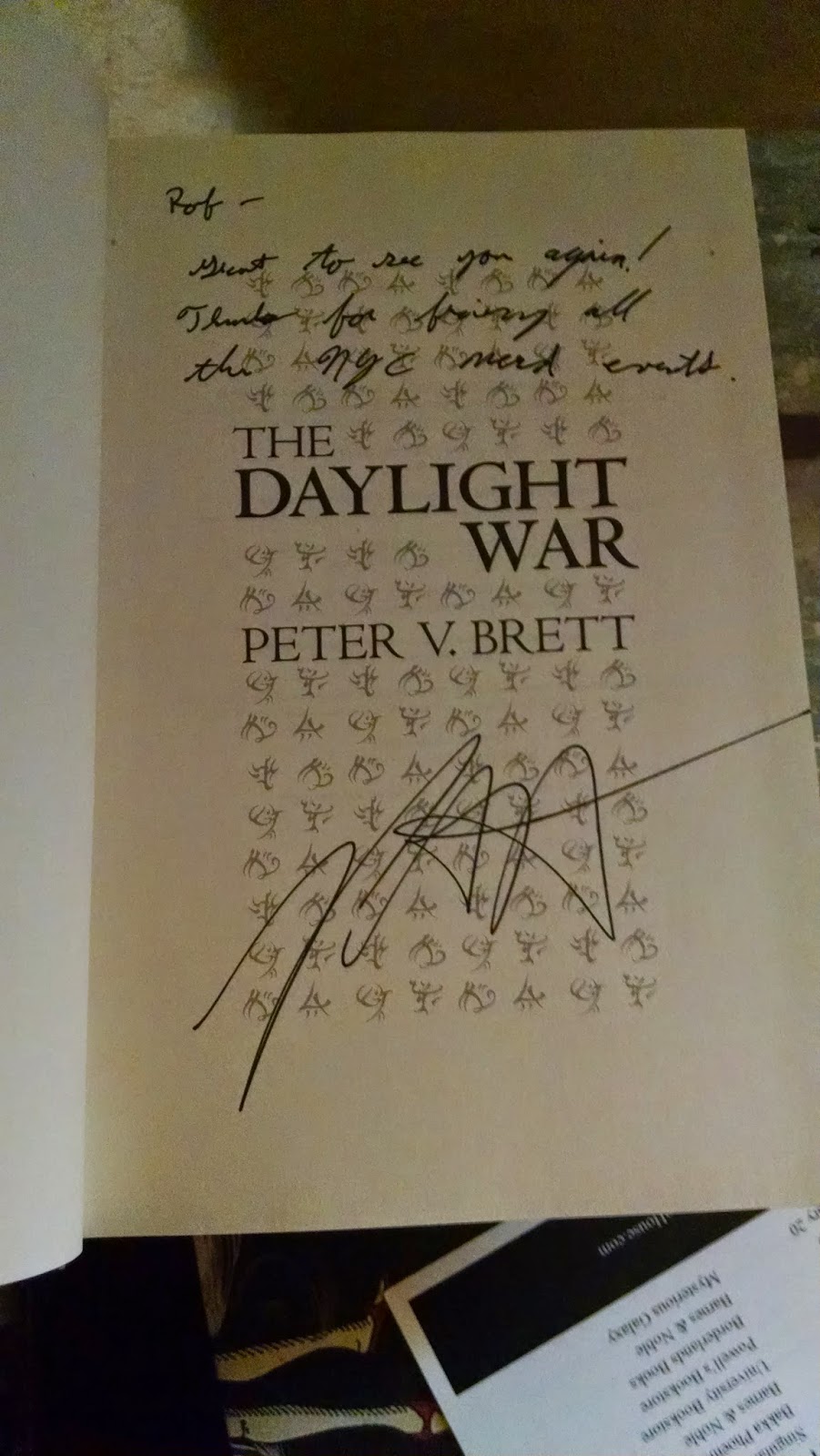 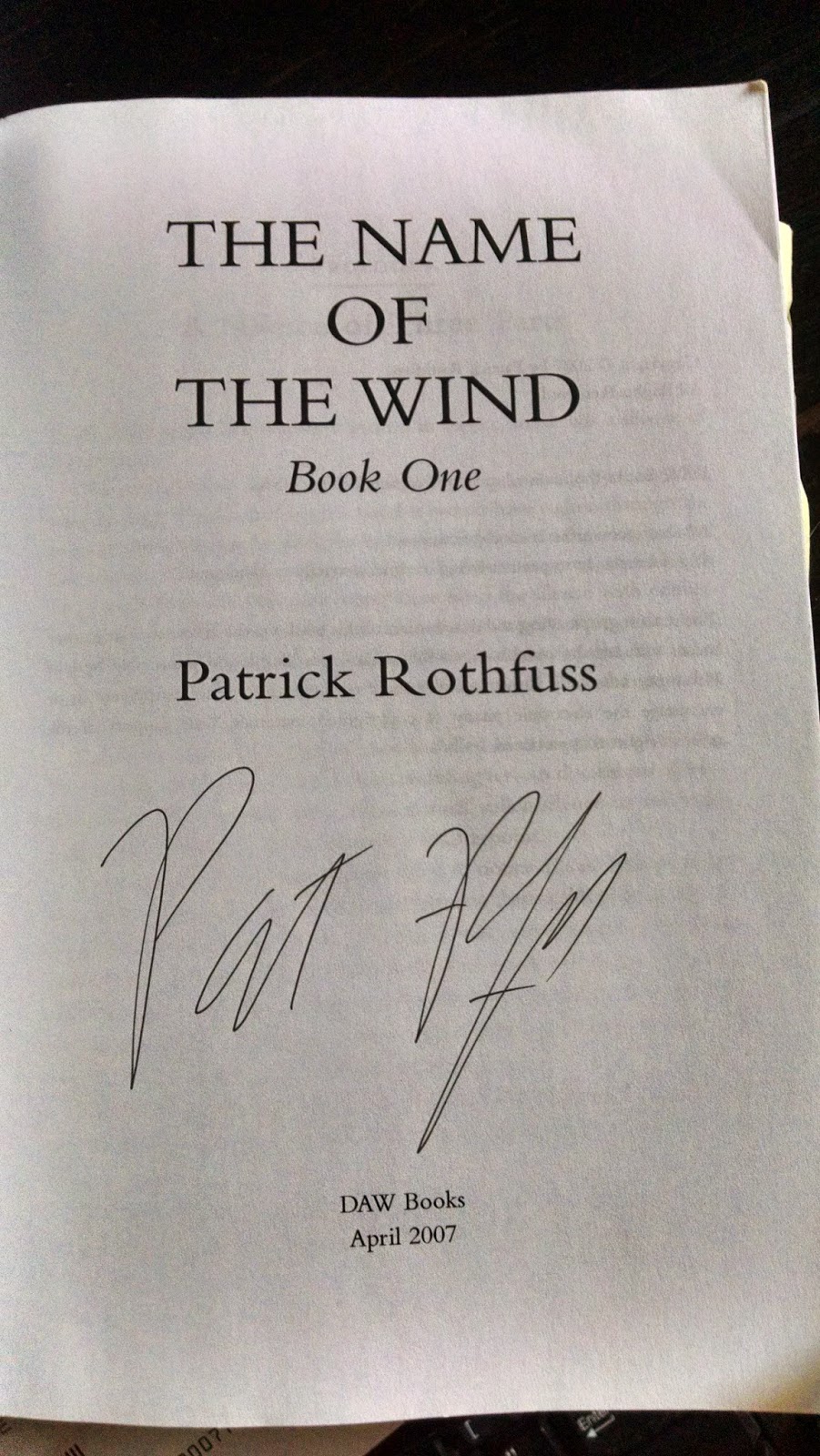 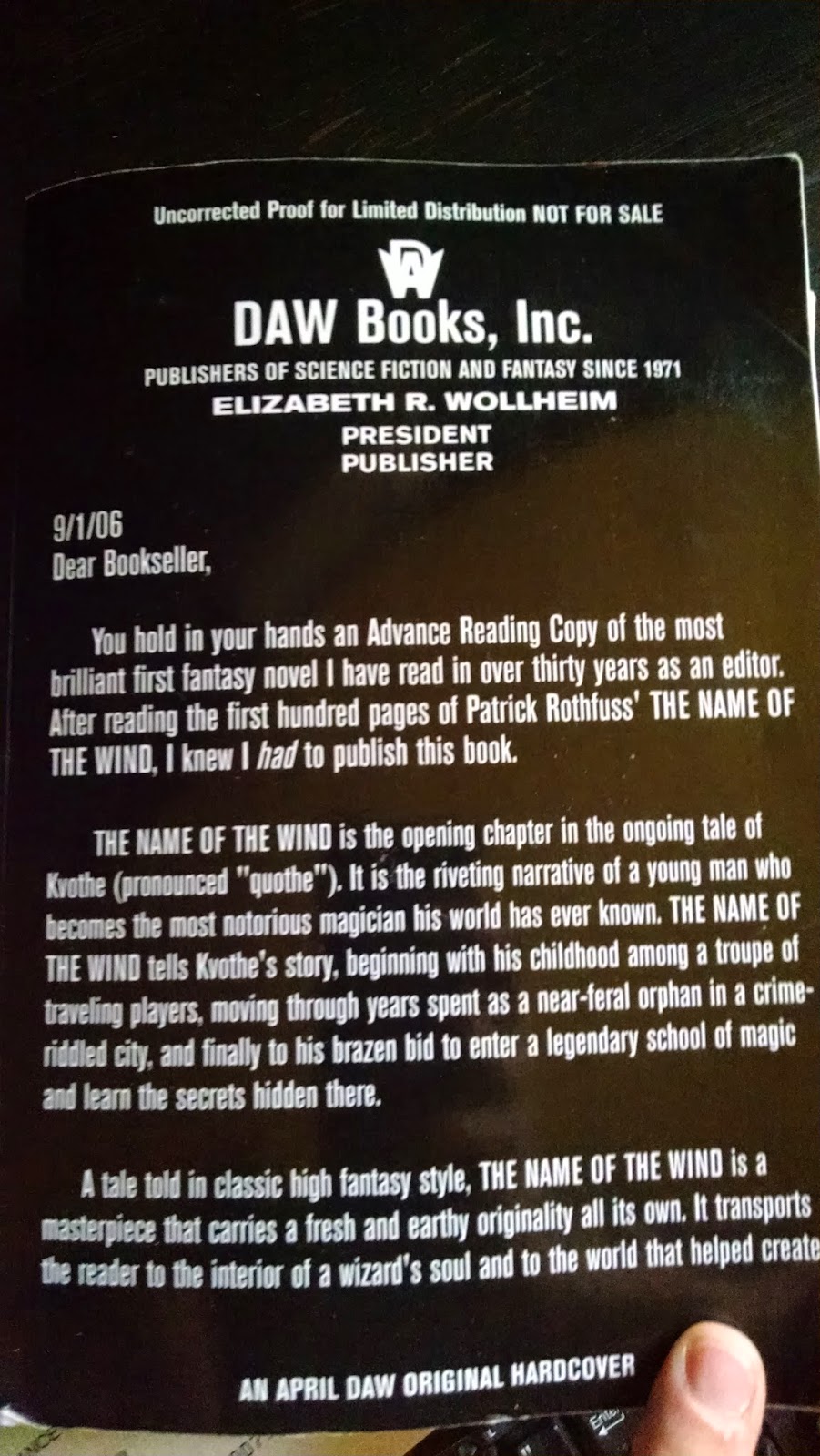 After that, I headed up to the publisher’s area and chatted with some of the fine folks who help to make the books I read and love. I stopped by HarperCollins’s booth and was chatting with their new editor, David Pomerico about a few books coming out from them in the nearish future (Dave was particularly excited about his first signing for HC and it does sound quite good). We got to talking about cover art, how Richard Anderson does great work and seems to be in very high demand when Kameron Hurley’s agent dropped in the booth. Kameron’s agent also handles Brian Staveley; both Brian and Kameron’s books have cover art by Anderson and I had to tell Kameron’s agent how fucking awesome The Mirror Empire was.

After that, I headed to the Penguin booth where I was able to snag a copy of Daniel José Older’s Half Resurrection Blues. I chatted with the great Colleen Lindsay for a bit and told her she needs to write a book about Mugsy. Iwas also able to snag a copy of Anton Strout’s Alchemystic and Tom Sniegowski’s A Kiss Before Apocalyps to have them signed by the authors. (I've been wanting to read Alchemystic for a while since I've become a big fan of the Disney cartoon Gargoyles.) The Tor and Hachette booths were near them too, so I caught up with Ardi (Tor’s awesome publicist) and Ellen (Orbit’s sorceress publicist). 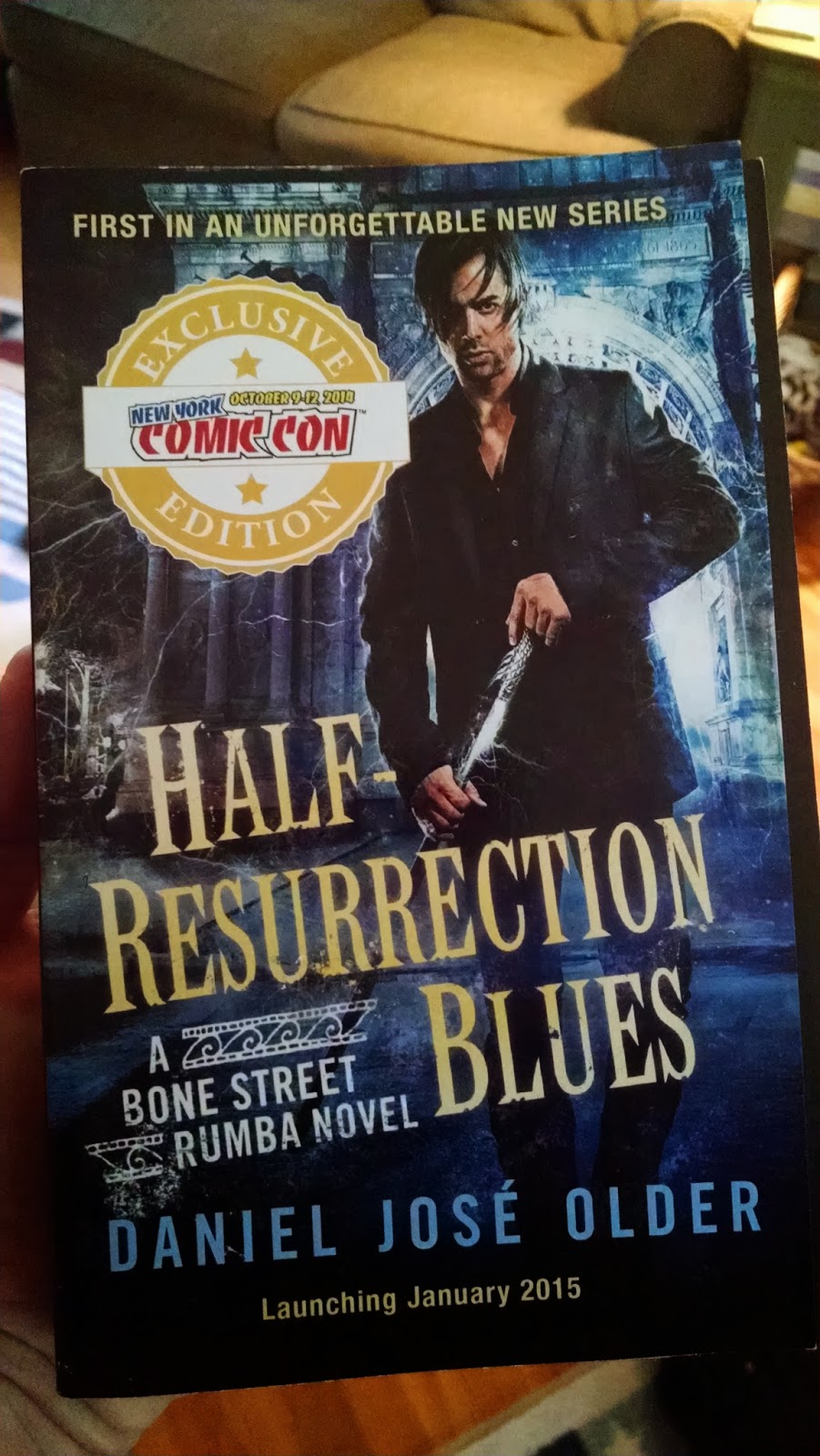 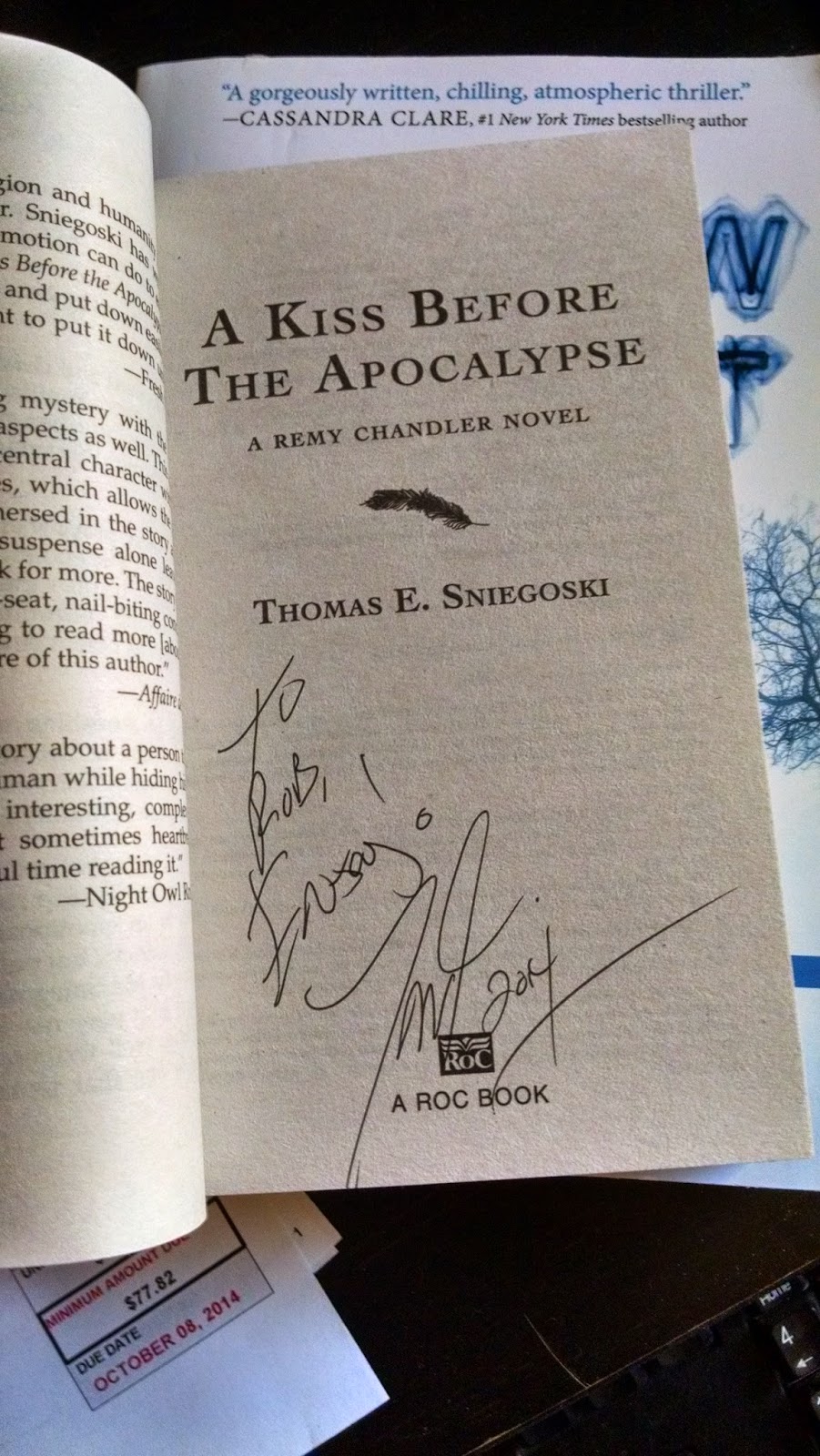 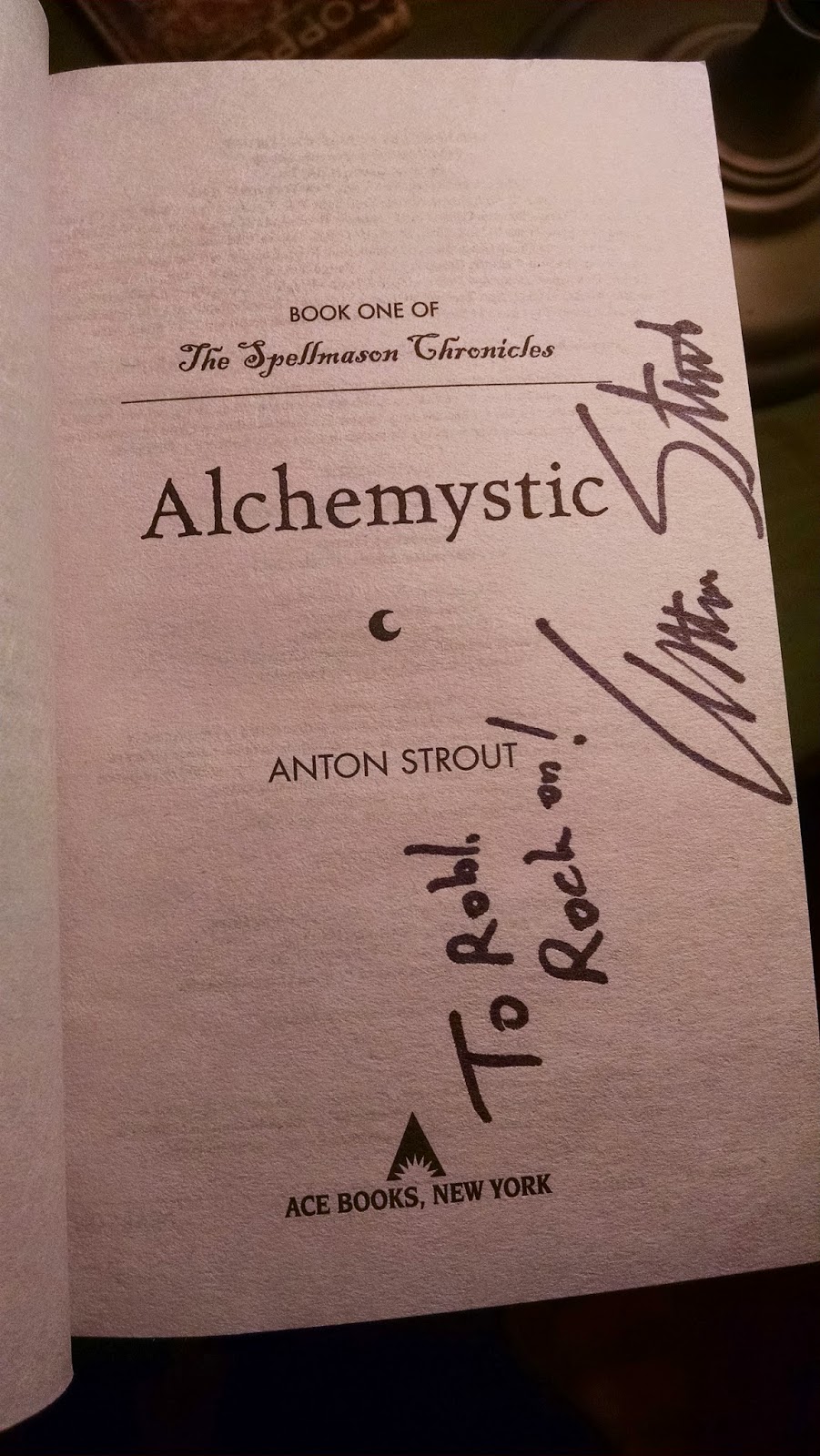