Day two of New York Comic Con in 2014 for me was Saturday and I admit to being slightly apprehensive about Saturday at the Javits Center. Last year, I attended only on Friday but the year before (2012) Leslie and I went on Saturday and the convention was mobbed and over-crowded. I suspect, at least partially, it felt that way because I knew I was attending only one day and felt it imperative to get to EVERYTHING in that condensed window. This year; however, I followed my wife’s advice as we took a leisurely stroll up and down the aisles of the entire convention floor. When we first arrived, we attended the panel for FX’s The League on the main Stage on the bottom floor. Neither of us watches the show; but two of the stars – Paul Scheer and Jason Mantzoukas – run a podcast we both like called How Did this Get Made? in which the panelists picks apart crappy or craptacular films. After a forthcoming episode was screened at the panel 1) we realized the show probably isn’t for us and 2) the panel was worth sitting through to hear Mantzoukas riff on the audience. 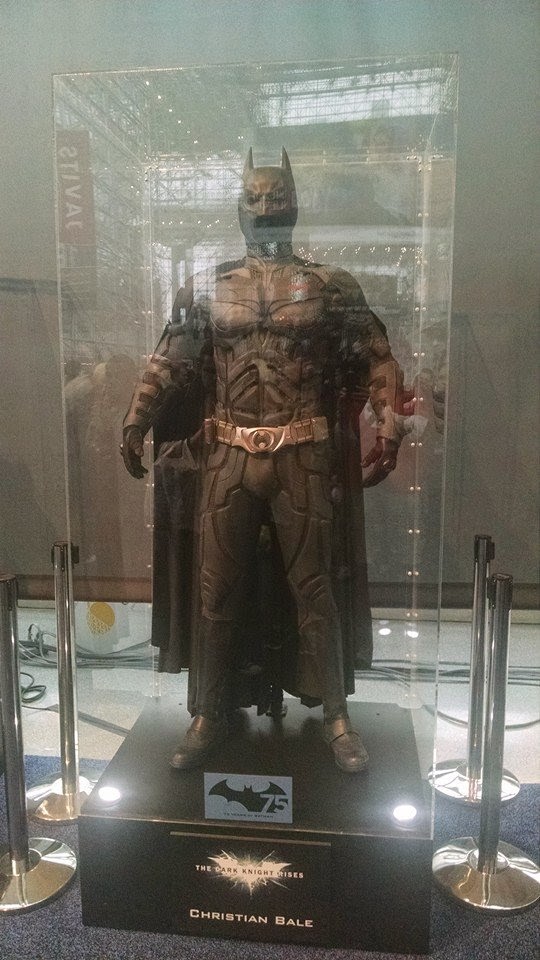 From there we went up and looked through the DC Entertainment booth which was highlighting Batman’s 75th Anniversary. There was also some gameplay footage of a new game - Infinite Crisis which looks like it could be fun. After the bat-visit, we proceeded to take our time walking up and down the aisles of the main floor. The first booth we hit was Obscura, the booth representing the store/show from the Science Channel show Oddities (a show my wife enjoys and one of the few reality programs I can tolerate). We chatted with proprietor Evan for a bit and Leslie purchased the book, The Morbid Anatomy Anthology they were selling which featured an essay from Evan. Leslie and I chatted with a few of the independent authors along our journey, purchased a couple of books and generally just absorbed everything.

I drifted through Publisher’s row again and made small talk with Ardi from Tor (and snagged a copy of Max Gladstone’s Three Parts Dead) as well as the folks at the Penguin, Hachette/Orbit and Random House booths. My wife was purchasing the puzzle of a novel S (the novel conceived by J.J. Abrams and written by Doug Dorst) and tugged on my shoulder at the Hachette booth. As it turns out, while she was making her purchase (and getting a couple of free ARCs with the purchase), a gentleman was looking at Leviathan Wakes and was likely asking about it. She said to him, that he should talk to me about out and I basically made him buy it. I guess my description of how great the book is worked on him.

Then we arrived at the BOOM! booth, saw a small gathering and realized Brian and Wendy Froud were signing things, particularly some commemorative editions of The Dark Crystal, Labyrinth, and The Storyteller. The Frouds, as in the creative forces behind some of the most iconic fantasy imagery of the past 30 or so years, including a film very near and dear to both our hearts: The Dark Crystal. Even better, while Leslie was getting her book signed by the Frouds, a woman next to us began chatting, in a very familiar manner, with the Frouds. We came to realize she was Cheryl Henson, one of Jim Henson’s daughters. I loved The Muppets growing up and most of the Henson productions, but my wife’s love for the Henson creative empire is far more expansive than mine. She couldn’t stop thanking Cheryl Henson for all the wonderful things her family’s company has created and done for people. Leslie may have even offered to work for any Henson company in any capacity, even if it mean just retrieving cloth from the warehouse to make Muppets. That might have been one of my favorite moments of NYCC, having Leslie meet somebody who meant so much to her as a child

Up and down the aisles we traversed, spotting art and assorted geekery ephemera. When we arrived at Neal Adams’s booth, I was tempted to purchase either a book for him to sign or a Batman print for him to sign, but I’ve still got some other geekish art pieces yet unhung in my house. Up and down, up and down…hit the Baen Books booth and snagged a copy of Larry Correia’s Hard Magic. I really enjoy his Monster Hunter books and wanted to give this other series a shot. Larry was going to be there later on, so I stopped by to have him sign Hard Magic and he was kind enough to give me a hardcover of Monster Hunter Nemesis before signing it. I know Larry’s got a rather…vocal online presence, but the few minutes he and I chatted he could not have been nicer. I was also hoping to get a copy of Charles Gannon’s Fire with Fire signed, but I missed his signing time. Jim Minz, who was running the booth, was kind enough to hand me a copy of the second book in that series, Trial by Fire.

Immediately thereafter was the signing for Mike Underwood’s Shield and Crocus at the 47North booth, which was just around the corner from Baen. I was online and having a conversation with a couple of people about Mike’s books when I realized, well rather, we both realized, we knew each other via twitter. I was chatting with none other than Sally of the excellent Qwillery blog. After hearing her schedule and what she was planning for her NYCC trip for the blog, I am even more impressed with her blog. We had Mike sign our books and then Sally and I started chatting with my wife when we spotted the mighty Shecky on line for Mike’s signature. I’d known Shecky for a while and met him in person at a recent Tor.com event (where I also chatted with Mike Underwood), but this was the first time I met Sally. The four of us then spoke for a bit until we realized the hour and how much at that point in the day, we all just wanted to go home.


Both times (Friday and Saturday) I strolled over to the Topatco booth Cecil Baldwin, the voice of Night Vale Radio was finishing up a signing. This just got me to thinking, it would have made sense for their booth to be very near the Obscura booth.

Saturday was an exceptional day for me at NYCC. It was wonderful to meet you and your very lovely wife! I'm still recovering and working on video editing.

Right back at you! Saturday was, surprisingly, the most relaxing day of the con for me.