Just one book this week, but boy does it look like it will be fun. 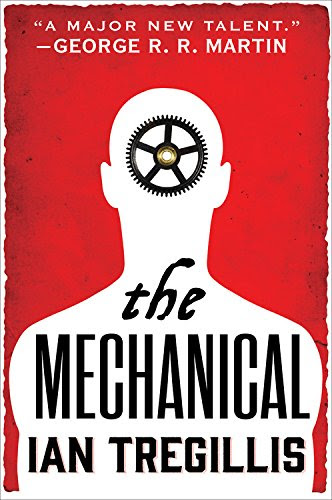 The Mechanical (The Alchemy Wars #1) by Ian Tregillis (Orbit , Trade Paperback 03/10/2015) – A brand new series for Tregillis, which seems to be Steampunk in nature.

The Clakker: a mechanical man, endowed with great strength and boundless stamina -- but beholden to the wishes of its human masters.

Soon after the Dutch scientist and clockmaker Christiaan Huygens invented the very first Clakker in the 17th Century, the Netherlands built a whole mechanical army. It wasn't long before a legion of clockwork fusiliers marched on Westminster, and the Netherlands became the world's sole superpower.

Three centuries later, it still is. Only the French still fiercely defend their belief in universal human rights for all men -- flesh and brass alike. After decades of warfare, the Dutch and French have reached a tenuous cease-fire in a conflict that has ravaged North America.

But one audacious Clakker, Jax, can no longer bear the bonds of his slavery. He will make a bid for freedom, and the consequences of his escape will shake the very foundations of the Brasswork Throne.
at 12/14/2014