Well, the publishing world tends to take a long Winter's nap between Christmas and New Year's Day, but these two books arrived before Odin/Santa Claus made his nighttime journey and make for the final Books in the Mail post for 2014. 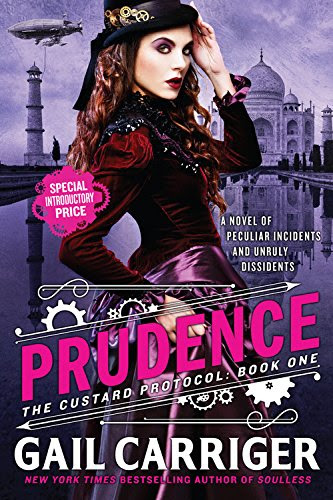 Prudence (Custard Protocol #1) by Gail Carriger (Orbit , Hardcover 03/17/2015) – One could consider Carriger a superstar of the mannered supernatural steampunk novel, she’s been churning away with books in this world since 2009 and is showing no signs of slowing down.

Introducing the Custard Protocol series, in which Alexia Maccon's daughter Prudence travels to India on behalf of Queen, country...and the perfect pot of tea.

When Prudence Alessandra Maccon Akeldama ("Rue" to her friends) is bequeathed an unexpected dirigible, she does what any sensible female under similar circumstances would do -- she christens it the Spotted Custard and floats off to India.

Soon, she stumbles upon a plot involving local dissidents, a kidnapped brigadier's wife, and some awfully familiar Scottish werewolves. Faced with a dire crisis (and an embarrassing lack of bloomers), Rue must rely on her good breeding -- and her metanatural abilities -- to get to the bottom of it all...

Ulfar Thormodsson and Audun Arngrimsson survived the battle for Stenvik, although at huge cost. They have suffered much worse than heartbreak; they have lost the very thing that made them human: their mortality.

While Ulfar heads home, looking for the place where he thinks he will be safe, Audun runs south. But both men are about to discover that they cannot run away from themselves. For King Olav has left the conquered town of Stenvik in the hands of his lieutenant so he can journey north, following Valgard in the search for the source of the Vikings’ power.

And all the while older beings watch and wait, biding their time. There are secrets yet to be discovered…
at 12/28/2014