From the Archives: Crystal Rain by Tobias Buckell

I first read Tobias Buckell's Crystal Rain when it initially published in 2006 and I thoroughly enjoyed the novel. In fact, I recall receiving the book.  It was a very snow filled day and I was out shoveling my driveway, a very long driveway at that (well over 100 feet long) and at the time I didn't have a snow-thrower. Thankfully, now I do.  I *think* the book came via UPS, whomever delivered it delivered it right to me since I was outside. I remember feeling as if the book's arrival was a reward for the long hours of snow shoveling.

Back to the book...Prior to reading Crystal Rain, I'd read some of his short stories and liked those as well.  Since Tor is relaunching the series, I thought I'd repost my SFFWorld review from January 2006 here on my blog to give the book the extra attention it rightly deserves. Crystal Rain (and the subsequent books, Ragamuffin and Sly Mongoose) are getting new covers to give them more of a Space Opera feel. I like them a lot though I admit to having a soft spot for the original art by Todd Lockwood (down in the middle of the review). This was an excellent debut and I enjoyed the subsequent books in the series a great deal. So here's what I thought of Crystal Rain back in late 2005 and posted the review on 01/01/2006... 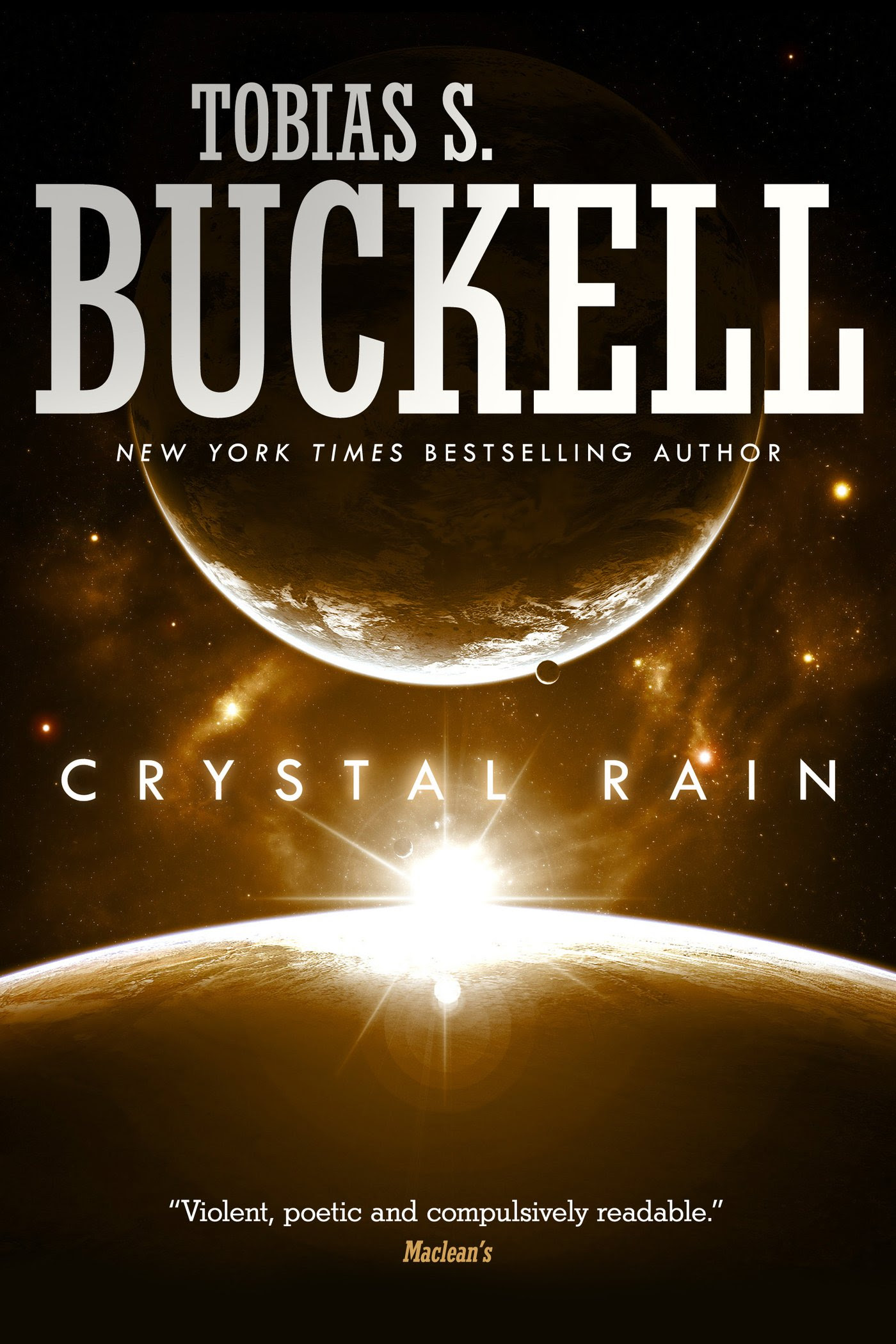 Here it is Tobias Buckell’s Crystal Rain comes with a fair amount of buzz, not the least of which are the quotes from notable writers such as Nalo Hopkinson, Mike Resnick, and Robert J. Sawyer. In addition, Buckell has been crafting short stories for a few years now, with appearances in various anthologies and the pre-eminent genre magazines. What I’ve read of his short fiction, I’ve enjoyed, so I was looking forward to seeing how he could flex his creative muscles in the longer form of the novel. If Crystal Rain is any indication, I’ll be reading more novels by Tobias.

For a first novel, any novel really, Buckell hits a lot of the right notes in this one. The protagonist, John deBrun, has lived for many years; however, he can only remember the last 27 years. He knows he appeared on the shores of Nanagada one day, but everything prior to that is a blur. In the intervening years between washing up without his memory and the start of Crystal Rain, he has married and has brought up a child. We follow John as struggles with this mystery, while, at the same time, he attempts to make his way towards a device his adoptive people think will help stave off the threat of the attacking Azteca. John is pretty complex, but he is only one of a number of memorable characters in the book. The character of Pepper, a man of John’s past who remembers John sets an ominous tone whenever his presence is “on screen,” and whose motivations are almost as much of a mystery as John’s memories.

There are elements of both Fantasy and Science Fiction in this one, with wormhole technology as the method of travel the people employed to reach (and become stranded) on Nanagada. One of the fantasy element flavoring the whole novel is the idea of humans living alongside gods. What I liked was how Buckell brought these elements, as well as a number of elements together in a pepperpot of a delectable, enjoyable story. Other tasty elements in this stew is the almost Dying Earth feel in the way that technology is treated and was phased out, as well as the sense of humanity’s readjustment to civilized society. John’s internal identity struggles parallel those of the external struggles of John’s people staving off the Azteca invasion, which I also thought worked very well.

The world comes vividly alive through the action of the plot, as well as the eyes of the character. The alien Earth-like planet seems a veritable jungle of conflict, with gods living amongst men, warring tribes and villages comprising the majority of human habitation. The invading Azteca, a tribe of men resembling Aztecs of our world, provides perhaps a hint of a deeper connection to our world. Floating in the sky are vessels, which seem a combination of blimp and boat. This, coupled with the sea vessel passages, gives the feel of what Robin Hobb did with her Liveship Traders saga, which is a good thing. The exoticness of the locales in both books are similar, if not in specifics, then in the contrast to much of the other science fiction and fantasy on the shelves.

Crystal Rain stands apart from the run-of-the mill fantasy and science fiction, while also providing that sense of wonder SF all too often neglects. Buckell is a deft, assured storyteller who will, hopefully, continue to publish novel-length fiction with the same eye for intricate setting and rounded characterization he’s exhibited here in his debut novel.