Catching up with the Classics or 3rd Time is a Charm – C.J. Cherryh’s Foreigner

C.J. Cherryh is a writer who needs little introduction to Science Fiction and Fantasy readers (although Andrew Liptak did a nice write-up about her at Kirkus). Even if you haven’t read any of her work, her name should be familiar. It is virtually impossible not to see her name in the SF section, she’s written over 50 novels since first publishing in the mid-1970s, has been nominated and received nearly every award the SFF genres have to offer. Yet, it is her 1994 novel Foreigner that launched what has become her single-longest series chronicling one character/set of characters continuously (even if many of the other novels take place in the same milieu).

But first, let’s take a step back. Foreigner isn’t my first attempt at reading a novel by C.J. Cherryh. The first Cherryh I read was The Dreaming Tree (a two-in-one edition containing The Tree of Swords and Jewels and Ealdwood). Or rather, I read the first half, about 15 years ago before giving up. I had a similar experience with Downbelow Station (link to SFFWorld Book Club discussion from 2006)  and ditched that book at about the halfway point. But yet…Cherryh’s output was so wide that surely I should try again, right? I was initially drawn to her work, admittedly, when I was browsing through Michael Whelan’s Web site many, many years ago and noticed just how many beautiful covers of her work he’d painted. Whelan's covers didn’t steer me wrong with C.S. Friedman, and he did covers for Stephen King and Tad Williams so I figured I had a good barometer.

Fast forward to a year or two ago….Cherryh’s name continually comes up in the conversations with folks I’ve become friends with on twitter an the online genre community (Stefan Raets, Paul Weimer) and I’m urged even more to give her work another (a yet unheard of third) attempt. So, I add Foreigner to my amazon wish list, received it for Christmas and earlier this week, I finally read it.

…and I enjoyed it. A great deal. 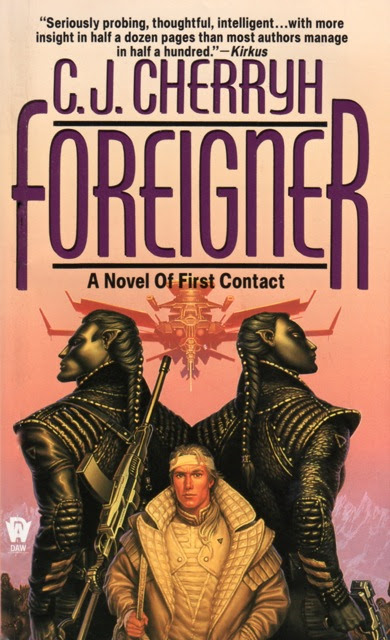 So, Foreigner is a first contact novel wherein aliens reluctantly visit a life with sentient beings and humans are those reluctant visitor aliens, the atevi are dark/black skinned inhabitants of the world humanity visits, and are several heads taller than humans, between 8 and 10 feet tall. The protagonist and our primary point of view character is Bren Cameron, the human who acts as translator / mediator / ambassador / representative (or the atevi title paidhi) for the atevi and is the lone human among the atevi.

The humans aren’t exactly fully welcome on the Atevi planet. Be that as it may, human technology has been slowly and deliberately introduced into atevi culture to the point that the atevi are close to reaching space travel technology.

The main action of the novel begins when an assassination attempt is made on Bren. It isn’t clear who is trying to kill the lone human, but it endangers the thin lines of stability in atevi culture and their relationship to humanity. This is made an even more challenging situation for Bren because of the subtle differences in atevi and human/English language and communication. He’s got two handlers, the male Banichi and female Jago, both of whom he tries to keep on an even keel without disappointing either of them. Part of his frustration and difficulty is that he is even more isolated, having been sequestered to an ancient castle for his own protection. He is little more than a prisoner under “castle” arrest, and all communication between him and the human populace has been halted; the regular letters he’d been receiving were cut off and the atevi are not permitting him to make any phone calls.

Although Cherryh uses an omniscient third person narrative, it is very limited to the point of view of what Bren sees and experiences so in that sense, it has much in common with the first person narrative. Because of this limiting narrative, we have as much of a clue as the human goings on and what his human friends are trying to communicate as does Bren himself.

In Bren’s situation – cut off from friends and his own damned species – feeling disheartened, frustrated, and confused are natural. Cherryh does a fine job of showing these emotions through Bren’s interactions with the atevi closest to him. What makes his character so strong is that he does not give into despair and hate. Through everything the atevi do to him (which turns out to be logical in hindsight once the big Reveal is, well, revealed), Bren seeks to understand them and seeks their understanding of him and humans.

Cherryh does some great things in this novel, she conveys so much about cultural misunderstandings as representatives of these cultures to try and understand each other. Some of the stronger portions of the novel involved conversations between Bren and Cenedi. My only real complaint is that a full character list would have been helpful.

This series has grown considerably since the publication of Foreigner in 1994 with 15 books in print (at about a book per year) and a 16th due this year (2015). For me, Foreigner serves as my new entry point into Cherryh’s enormous oeuvre and I hope to spend time catching up with her work. I will likely next dive into the four-book Morgaine Cycle,  perhaps The Chanur Saga, maybe The Faded Sun (I am a sucker for an omnibus and DAW does them better than any publisher), the next Foreigner installment, or maybe another Michael Whelan cover which catches my eye. 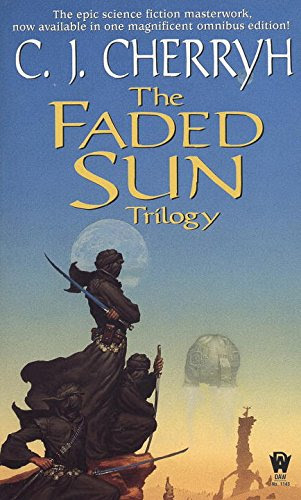 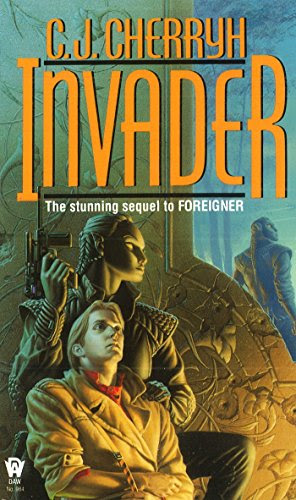 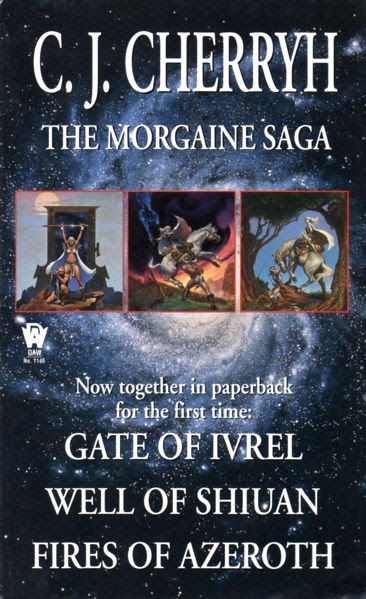 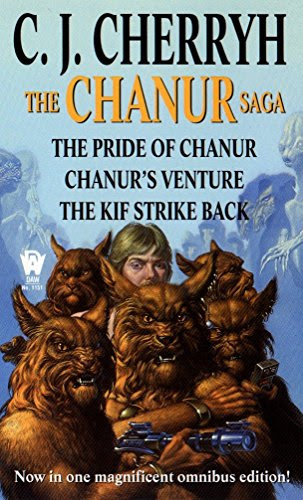 Would I have enjoyed the book had I tried it any other time, say closer to the time I read and gave up on Downbelow Station? I don’t know, but I’m leaning towards a “no.” My reading tastes in the genre have evolved and matured in the last decade. I think this is due in large part to my interactions with other  friends / readers, which has allowed me to be more open, willing to try again, and think about what I read differently than I did 5, 10, 15 years ago.

Later edit: I would be remiss if I didn't point out Jo Walton's excellent overview of some of Cherryh's work, including a reread of the Foreigner series, with over at Tor.com.

On a side note, I read the physical/mass market version of this book and as I’ve been wont to do in recent months, I was “reading” an audio-book at the same time. In this case, Andy Weir’s The Martian. There’s an interesting contrast in the two novels, in particular the abandonment both protagonists experience.
at 9/10/2015

Email ThisBlogThis!Share to TwitterShare to FacebookShare to Pinterest
Labels: C.J. Cherryh, Catching up with the Classics, DAW, Foreigner, Michael Whelan