Y'all know the drill by now. Here's a snapshot of what arrived at the o'Stuff compound this week. 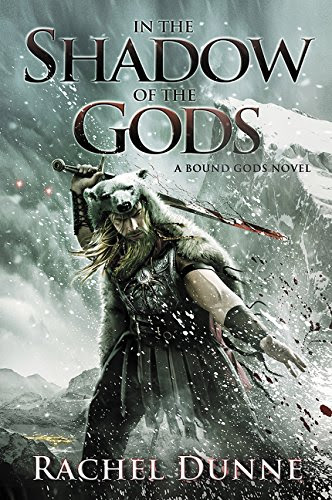 In the Shadow of the Gods (A Bound Gods novel) by Rachel Dunne (Harper Voyager, Trade Paperback 06/21/2016) – This is Dunne’s debut and was a finalist for Amazon’s Breakthrough Novel Award in 2014, but was soon snatched up to be published by Harper. This looks like some good old epic fantasy fun.

A breathtaking talent makes her debut with this first book in a dark epic fantasy trilogy, in which a mismatched band of mortals led by a violent, secretive man must stand against a pair of resentful gods to save their world.

Eons ago, a pair of gods known as the Twins grew powerful in the world of Fiatera, until the Divine Mother and Almighty Father exiled them, binding them deep in the earth. But the price of keeping the fire lands safe is steep. To prevent these young gods from rising again, all twins in the land must be killed at birth, a safeguard that has worked until now.

Trapped for centuries, the Twins are gathering their latent powers to break free and destroy the Parents for their tyranny—to set off a fight between two generations of gods for control of the world and the mortals who dwell in it.

When the gods make war, only one side can be victorious. Joros, a mysterious and cunning priest, has devised a dangerous plan to win. Over eight years, he gathers a team of disparate fighters—Scal, a lost and damaged swordsman from the North; Vatri, a scarred priestess who claims to see the future in her fires; Anddyr, a drug-addled mage wandering between sanity and madness; and Rora and Aro, a pair of twins who have secretly survived beyond the reach of the law.

These warriors must learn to stand together against the unfathomable power of vengeful gods, to stop them from tearing down the sun . . . and plunging their world into darkness. 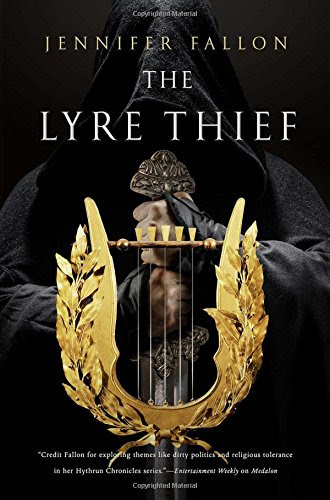 The Lyre Thief (War of the Gods Trilogy #1) by Jennifer Fallon (Tor, Hardcover 03/08/2016) – Fallon is very popular in her native Australia and what she’s released here in the States seems to be well received. I’ve wanted to give her work a try for a while, looks like I’ve got the opportunity with this one.

From one of Voyager's bestselling authors a fabulous new epic fantasy series ... referencing The Demon Child trilogy and The Hythrun Chronicles.

Her Serene Highness, Rakaia, Princess of Fardohnya, is off to Hythria, where her eldest sister is now the High Princess, to find herself a husband, and escape the inevitable bloodbath in the harem when her brother takes the throne.

Rakaia is not interested in marrying anyone, least of all some brute of a Hythrun Warlord she's never met, but she has a plan to save herself from that, too. If she can just convince her baseborn sister, Charisee, to play along, she might actually get away with it.

But there is trouble brewing across the continent. High Prince of Hythria, Damin Wolfblade, must head north to save the peace negotiated a decade ago between the Harshini, Hythria, Fardohnya, Medalon and Karien. He must leave behind an even more dangerous conflict brewing between his wife and his powerful mother, Princess Marla.

...And in far off Medalon, someone has stolen the music.

Their quest for the tiny stolen lyre containing the essence of the God of Music will eventually touch all their lives, threaten everything they hold dear and prove to be far more personal than any of them can imagine.

In Alive, Scott Sigler introduced readers to an unforgettable young heroine and a mysterious new world reminiscent of those of The Hunger Games, Divergent, and Red Rising. Now he expands his singular vision in the next thrilling novel of this powerful sci-fi adventure series.

“If it’s war they want, they messed with the wrong girl.”

M. Savage—or Em, as she is called—has made a bewildering and ominous discovery. She and the other young people she was chosen to lead awoke in strange coffins with no memory of their names or their pasts. They faced an empty, unknown place of twisting tunnels and human bones. With only one another to depend on, they searched for answers and found the truth about their terrifying fate. Confronted by a monstrous enemy, they vowed never to surrender—and, by any means, to survive.

The planet Omeyocan may be the sanctuary Em and her comrades seek. But the planet for which they were created turns out not to be a pristine, virgin world. Vestiges of a lost civilization testify to a horrifying past that may yet repeat itself. And when a new enemy creeps from the jungle shadows, Em and her young refugees learn there’s nowhere left to run. They face a simple choice: fight or die.

In the midst of this desperate struggle, their unity is compromised from within—and a dangerous zealot devoted to a bloodthirsty god moves to usurp Em’s command, threatening to lead them all down a path to violent doom.
at 2/28/2016