January has ended and I read a handful of books during the months. I reviewed Robert Jackson Bennett’s City of Blades, the second installment of his soon-to-be landmark Divine Cities epic fantasy series.

As for what I haven’t reviewed, at the start of the year I began my long anticipated re-read (books 1-4) and finish off Kate Elliott’s Crown of Stars series with the Nebula nominated first book in the series King’s Dragon. In short, I loved the book, and have much more to say on it. I am thinking of doing a write up of the series as I re-read books 1-4 and as it looks now, I may be doing one book per month. I really like the feel of this world and was pulled along.  I am very excited to continue with this series, the next of which is Prince of Dogs.

After finishing off King’s Dragon, I dove into Elizabeth Bear’s Dust, a very fascinating take on the generational starship story. Bear always brings a wonderful voice to whatever she writes and this novel from a few years ago (2008) is no exception. It felt as much like a fantasy story with the religion that grew out of long years on the ship.

Although I began listening to the book at the end of December (my audible credit becomes available to me on the 24th of each month), Paul S. Kemp’s thrilling Star Wars novel Lords of the Sith (as read by with gusto and pacing by Jonathan Davis) accompanied me on my commute to and from work and other drives for the first couple weeks of the month.

I think Kemp did a fine job with Vader and his relationship to Palpatine. This story takes place between Revenge of the Sith and A New Hope, so Vader isn’t quite the feared monster in black he is when we first “meet” him on screen. I’d be pleased if Rogue One took some cues from this novel. There's still some lingering Anakin in Darth Vader in this story.

Although I haven't read every (or even half) of the Star Wars novels out there, I think the only other writer who capture Vader better was Matthew Stover in his novelization of Star Wars Episode III: Revenge of the Sith.

Next up was Larry Correia’s Monster Hunter: Alpha. I bought the omnibus o the first three Monster Hunter novels a couple of years ago for a steal at $6. Larry switched things up for the third installment of the Monster Hunter series, focusing on Earl Shackelford (as opposed to Owen Pitt) and switching to an omniscient third person narrative voice rather than Owen’s first person perspective. This was a helluva a lot of fun, so much so that before I even finished reading Monster Hunter: Alpha I bought Monster Hunter: Legion. I would really like to read more novels focused on Earl, maybe some of his earlier adventures. I was also lucky enough to snag a signed copy of

The next audio book I gave a try was/is Anne Lyle’s The Alchemist of Souls, her debut and the first installment of her Night’s Mask trilogy. Michael Page does a very good job with the narration, I like the variety of voices and inflections he brings to the story. The setting is great, but for reasons I can’t fully explain, the story isn’t completely holding my attention. It is by no means bad, but I think I’m going to take a break from it at the moment.

As the month ends, I’m in the middle of Pierce Brown’s Red Rising. Del Rey was giving away copies of this at New York Comic Con this past October (2015). I’ve seen so many great things about the book and for the most part, the book is crafted quite well. A good story, good setting, but I really feel like I’ve read this one before. I finished the book on Friday and wasn't too impressed with the book altogether.  It really felt like The Hunger Games with a male protagonist along with a dash of The Departed.

Lastly, I began slowly poring over the pages of Volume III of The Annotated Sandman. This is a beast of a book. Leslie Klinger (who did fantastic work on the previous two volumes as well as an Annotated Dracula and volume of HP Lovecraft I own) continues to add layers and depth, from a storytelling perspective, to one of the deepest and richest stories any medium has seen. 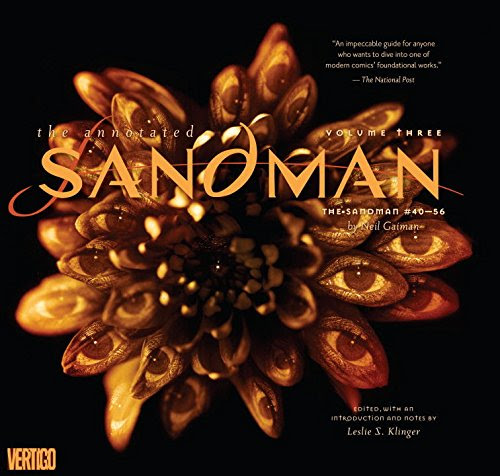