The Kingdom of Ohio by Matthew Flaming (Putnam, Hardcover 12/31/2009) – Having this book arrive on my porch was the first I heard of it, and it the description below is intriguing. .

After discovering an old photograph, an elderly antiques dealer living in present-day Los Angeles is forced to revisit the history he has struggled to deny. The photograph depicts a man and a woman. The man is Peter Force, a young frontier adventurer who comes to New York City in 1901 and quickly lands a job digging the first subway tunnels beneath the metropolis. The woman is Cheri- Anne Toledo, a beautiful mathematical prodigy whose memories appear to come from another world. They meet seemingly by chance, and initially Peter dismisses her as crazy. But as they are drawn into a tangle of overlapping intrigues, Peter must reexamine Cheri-Anne's fantastic story. Could it be that she is telling the truth and that she has stumbled onto the most dangerous secret imaginable: the key to traveling through time?

Set against the mazelike streets of New York at the dawn of the mechanical age, Peter and Cheri-Anne find themselves wrestling with the nature of history, technology, and the unfolding of time itself.

THE DEPARTED HAVE ARRIVED.

The world is not the way it was. The dead have risen, and the living are under attack. The powerful Church of Real Truth, in charge since the government fell, has sworn to reimburse citizens being harassed by the deceased.

Consequently, there are many false claims of hauntings from those hoping to profit. Enter Chess Putnam, a fully-tattooed witch, freewheeling Debunker, and ghost hunter. She’s got a real talent for nailing human liars and banishing the wicked dead. But she’s keeping a dark secret from the Church: a little drug problem that’s landed her in hot and dangerous water.

Chess owes a lot of money to a murderous drug lord named Bump. And Bump wants immediate payback. All Chess has to do is dispatch a very nasty species of undead from an old airport. But the job involves black magic, human sacrifice, a nefarious demonic creature, and crossing swords with enough wicked energy to wipe out a city of souls. Toss in lust for a rival gang leader and a dangerous attraction to Bump’s ruthless enforcer, and Chess begins to wonder if the rush is really worth it. Hell, yeah.

Gardens of the Sun by Paul McAuley (Pyr Trade Paperback 03/15/2010) – This will be a welcome sequel to The Quiet War for many. However, I’m one of the only people who didn’t seem to connect with that book.

The Quiet War is over. The city-states of the moons of Jupiter and Saturn, founded by descendants of refugees from Earth's repressive regimes, the Outers, have fallen to the Three Powers Alliance of Greater Brazil, the European Union, and the Pacific Community. A century of enlightenment, rational utopianism, and exploration of new ways of being human has fallen dark. Outers are herded into prison camps and forced to collaborate in the systematic plundering of their great archives of scientific and technical knowledge, while Earth's forces loot their cities and settlements and ships, and plan a final solution to the "Outer problem."

But Earth's victory is fragile, and riven by vicious internal politics. While seeking out and trying to anatomize the strange gardens abandoned in place by the Outers' greatest genius, Avernus, the gene wizard Sri Hong-Owen is embroiled in the plots and counterplots of the family that employs her. The diplomat Loc Ifrahim soon discovers that profiting from victory isn't as easy as he thought. And on Earth, in Greater Brazil, the democratic traditions preserved and elaborated by the Outers have infected a population eager to escape the tyranny of the great families who rule them.

Meanwhile, in the outer reaches of the Solar System, a rag-taggle group of refugees struggle to preserve the last of the old ideals. And on Triton, fanatical members of a cabal prepare for a final battle that threatens to shatter the future of the human species.

After a conflict fought to contain the expansionist, posthuman ambitions of the Outers, the future is as uncertain as ever. Only one thing is clear. No one can escape the consequences of war—especially the victors.

Starship: Flaghsip (Book Five of the Starship Series) by Mike Resnick (Pyr , Hardcover December 2008) – This I’ve read the first three books (Starship: Mutiny, Starship: Pirate, Starship: Mercenary) but haven’t read the fourth yet, which I plan to remedy now that I have the full series..

The date is 1970 of the Galactic Era, almost three thousand years from now, and the Republic, created by the human race but not yet dominated by it, finds itself in an all-out war against the Teroni Federation, an alliance of races that resent Man's growing military and economic power.

The rebel starship, the Theodore Roosevelt, under the command of Wilson Cole, is preparing to lead Cole's ragtag armada into the Republic, even though he is outnumbered thousands to one. Cole is convinced that the government has become an arrogant and unfeeling political entity and must be overthrown.

The trick is to avoid armed conflict with the vast array of ships, numbering in the millions, in the Republic's Navy. For a time Cole's forces strike from cover and race off to safety, but he soon sees that is no way to conquer the mightiest political and military machine in the history of the galaxy. He realizes that he must reach Deluros VIII, the headquarters world of the Republic (and of the race of Man), in order to have any effect on the government at all—but Deluros VIII is the best-protected world in the Republic.

But a new threat looms on the horizon. Cole, the Valkyrie, David Copperfield, Sharon Blacksmith, Jacovic, and the rest of the crew of the Teddy R face their greatest challenge yet, and the outcome will determine the fate of the entire galaxy.

Empire in Black and Gold (Shadows of the Apt) 1 by Adrian Tchaikovsky (Pyr , Trade Paperback 03/13/2010) – I’ve seen and read good things about this series of books, so I was pleased to find out Pyr is bringing this books out for US readers. This is an ARC of the first book of the series.


The city states of the Lowlands have lived in peace for decades, bastions of civilization, prosperity and sophistication, protected by treaties, trade and a belief in the reasonable nature of their neighbours.

But meanwhile, in far-off corners, the Wasp Empire has been devouring city after city with its highly trained armies, its machines, it killing Art . . . And now its hunger for conquest and war has become insatiable.

Only the ageing Stenwold Maker, spymaster, artificer and statesman, can see that the long days of peace are over. It falls upon his shoulders to open the eyes of his people, before a black-and-gold tide sweeps down over the Lowlands and burns away everything in its path.

But first he must stop himself from becoming the Empire's latest victim. 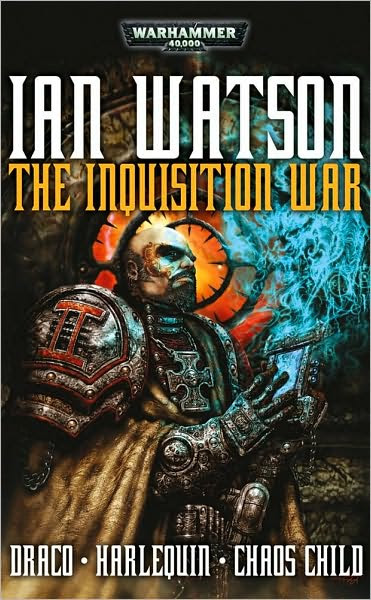 The Inquistion War by Ian Watson (Black Library Paperback 12/29/2009) – Watson is a respected British SF author and this is what Black Library considers one of the classics of the Warhammer 40,000 universe, and as such, they’ve reissued it.

The phenomenal trilogy is back in print!

The Inquisition War is the classic story of Inquisitor Jaq Draco and his desperate mission to uncover a plot that will bring mankind to its knees before the Dark Powers. Written by award-winning author, Ian Watson, The Inquisition War explores areas of the Warhammer 40,000 mythology that few other authors have dared to tackle!

Collected in this omnibus is the seminal trilogy of Draco (previously released as Inquisitor), Harlequin, Chaos Child and two linking short stories which together make the legend of The Inquisition War complete.
at 12/06/2009