The Devil's Alphabet by Daryl Gregory

After last week’s whirlwind week of reviews, we are back to one review up at SFFWorld today.

That book under review is Daryl Gregory’s second novel, The Devil’s Alphabet: 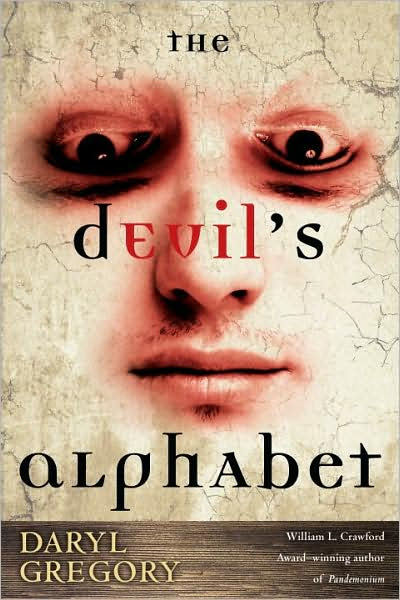 Gregory’s protagonist is Paxton Abel Martin, Pax for short. Pax was one of the few residents of Switchcreek not affected by TDS, and because he was unaffected, he is considered a “skip.” As a result, his father, a preacher and a charlie, urged him to leave. Pax settles in Chicago and fifteen years later, Pax is called back to Switchcreek to attend the funeral of Jo Lynn who was his closest friend as a child. What Pax finds most surprising is that her death is ruled a suicide. When he returns to his childhood home he finds his father in worse condition than he could have imagined. Pax soon learns that one of the side attributes of the grotesquely enormous charlies is the secretion? of the Vintage, essentially a new drug. Pax is unable to not try the vintage and it sends him into an incredible, hallucinogenic high.

What Pax learns about his father; however, is just the tip of the proverbial iceberg. The theme of small town secrets is prevalent both in real life and in fiction, and Gregory does an incredibly convincing job of revealing the many secrets of Switchcreek. Though some of the secrets are both dark and benevolent at the same time, the path Gregory wends in revealing these secrets is clever and plausible.

Last week I also finished The Road by Cormac McCarthy and I’m still thinking about the book’s simple, elegant and profound story. It took me a bit to get accustomed to McCarthy’s very sparse style – barely any punctuation like opening and closing quotes for dialogue and brief sentences in said dialogue. However, once I was swept up in the story, I couldn’t imagine it being told in any other style since the style mirrored the story being told very well.