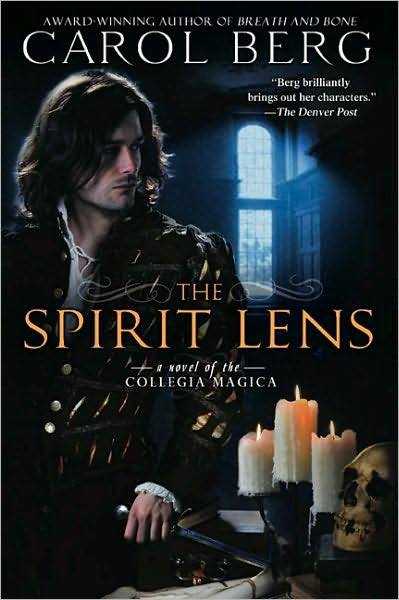 Spirit Lens (College of Magica #1) by Carol Berg (Roc, Trade Paperback 01/05/2009) – I read Berg’s debut novel, Transformation a couple of years ago and enjoyed it. Since then, she’s put out an impressive number ov novels and this one kicks off a new trilogy.


For Portier de Savin-Duplais, failed student of magic, sorcery's decline into ambiguity and cheap illusion is but a culmination of life's bitter disappointments. Reduced to tending the library at Sabria's last collegia magica, he fights off despair with scholarship. But when the King of Sabria charges him to investigate an attempted murder that has disturbing magical resonances, Portier believes his dreams of a greater destiny might at last be fulfilled...

Hastur Lord (A Darkover novel) by Marion Zimmer Bradley and Deborah J. Ross (DAW, Hardcover 01/05/2009) – Bradley’s Darkover saga is popular and extremely long-running, especially considering it has been a decade since she passed away and this is a new book.

The world of Darkover, a unique, isolated, and protected world, has long avoided becoming part of the technologically advanced Terran Empire. But things are about to change. Regis Hastur, lord of the most powerful of the seven Domains in Darkover, learns that the Empire is about to become a Federation, and is extending an invitation for all of the worlds to join. While the offer seems tempting to his people, Regis knows that Darkover would become little more than a military base, used for its unique planetary position, and will be sapped of its resources. He must now stop at nothing to save his world. 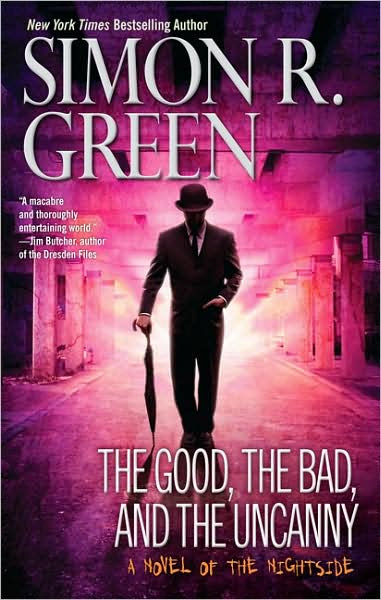 The Good, the Bad, and the Uncanny (The Eleventh Novel of the Nightside) by Simon R. Green (Ace, Hardcover 01/05/2010) – Green is automatic – you can count on at least one book by him a year, and this is the first one of his books to publish in 2010.

Things were going so well for P.I. John Taylor, that it was only a matter of time before everything hit the fan. Walker, the powerful, ever-present, never­to-be-trusted agent who runs the Nightside on behalf of The Authorities, is dying. And he wants John to be his successor-a job that comes with more baggage, and more enemies, than anyone can possibly imagine. 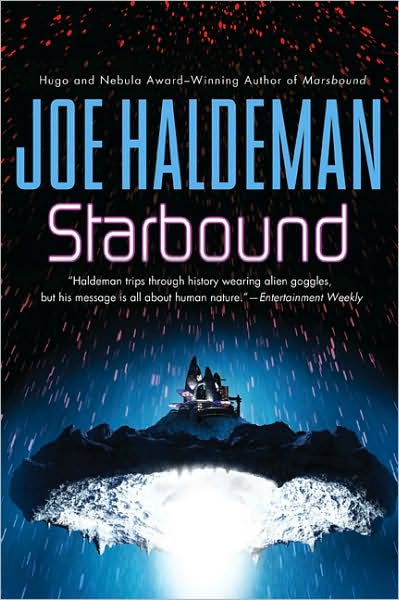 Starbound by Joe Haldeman (Ace, Hardcover 01/05/2010) – Haldeman is a living legend and will be named Grand Master by the SFWA next year. I read and enjoyed both The Forever War and Forever Peace this is his latest novel and the synopsis sounds pretty interesting..

A New from the Hugo, Nebula, and John W. Campbell Award-winning author of Marsbound.

Carmen Dula and her husband have spent six years travelling to a distant solar system that is home to the enigmatic, powerful race known as "The Others," in the hopes of finding enough common purpose between their species to forge a delicate truce.

By the time Carmen and her party return, fifty years have been consumed by relativity-and the Earthlings have not been idle, building a massive flotilla of warships to defend Earth against The Others. But The Others have more power than any could imagine-and they will brook no insolence from the upstart human race.

Through Stone and Sea (The Eleventh A Novel of the Noble Dead) by Barb and JC Hendee (Roc, Hardcover 01/05/2010) – These Hendees are nothing if they aren’t consistent, the previous book in this series came out just about exactly a year prior to this one.

Wynn journeys to the mountain stronghold of the dwarves in search of the "Stonewalkers," an unknown sect supposedly in possession of important ancient texts. But in her obsession to understand these writings, she will find more puzzles and questions buried in secrets old and new-along with an enemy she thought destroyed.... 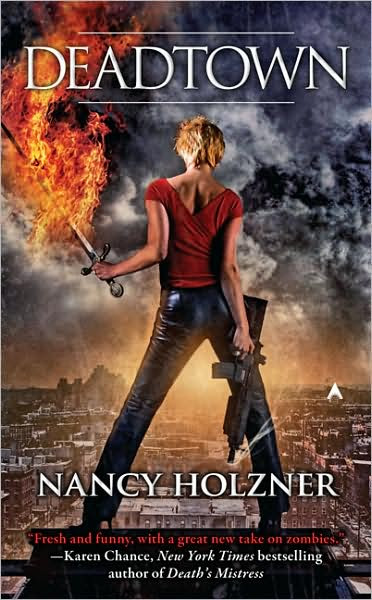 Vicky’s demanding job keeping the city safe from all manner of monsters is one reason her relationship with workaholic lawyer (and werewolf) Alexander Kane is in constant limbo. Throw in a foolhardy zombie apprentice, a mysterious demon-plagued client, and a suspicious research facility that’s taken an unwelcome interest in her family, and Vicky’s love life has as much of a pulse as Deadtown’s citizens.

But now Vicky’s got bigger things to worry about. The Hellion who murdered her father ten years ago has somehow broken through Boston’s magical protections. The Hellion is a ruthless force of destruction with a personal grudge against Vicky, and she’s the only one who can stop the demon before it destroys the city and everyone in it. 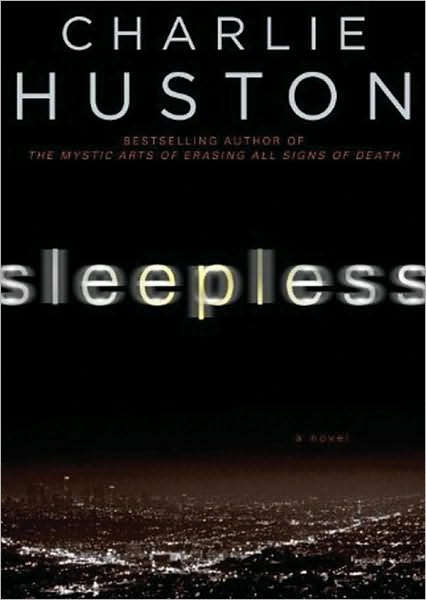 Sleepless by Charlie Huston (Random House, Hardcover 1/28/2010) – What I’ve read by Huston (The Mystic Arts of Erasing All Signs of Death and Already Dead) were both very good, so Huston taking on post-apocalyptic fiction seems a no brainer for me.

From bestselling author Charlie Huston comes a novel about the fears that find us all during dark times and the courage and sacrifice that can save us in the face of unimaginable odds. Gripping, unnerving, exhilarating, and haunting, Sleepless is well worth staying up for.

What former philosophy student Parker Hass wanted was a better world. A world both just and safe for his wife and infant daughter. So he joined the LAPD and tried to make it that way. But the world changed. Struck by waves of chaos carried in on a tide of insomnia. A plague of sleeplessness.

Park can sleep, but he is wide awake. And as much as he wishes he was dreaming, his eyes are open. He has no choice but to see it all. That's his job. Working undercover as a drug dealer in a Los Angeles ruled in equal parts by martial law and insurgency, he's tasked with cutting off illegal trade in Dreamer, the only drug that can give the infected what they most crave: sleep.

After a year of lost leads and false trails, Park stumbles into the perilous shadows cast by the pharmaceuticals giant behind Dreamer. Somewhere in those shadows, at the nexus of disease and drugs and money, a secret is hiding. Drawn into the inner circle of a tech guru with a warped agenda and a special use for the sleepless themselves, Park thinks he knows what that secret might be.

To know for certain, he will have to go deeper into the restless world. His wife has become sleepless, and their daughter may soon share the same fate. For them, he will risk what they need most from him: his belief that justice must be served. Unknown to him, his choice ties all of their futures to the singularly deadly nature of an aging mercenary who stalks Park. 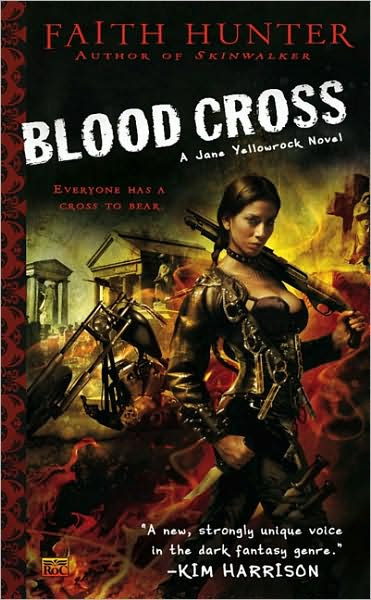 Blood Cross (Jane Yellowrock #2) by Faith Hunter (Roc Mass Market Paperback 1/06/2010) – The second in a Vampire Hunter series. The twist here is that the hunter is a Native American shapeshifter.


Jane Yellowrock is back on the prowl against the children of the night...


The vampire council has hired skinwalker Jane Yellowrock to hunt and kill one of their own who has broken sacred ancient rules-but Jane quickly realizes that in a community that is thousands of years old, loyalties run deep.. 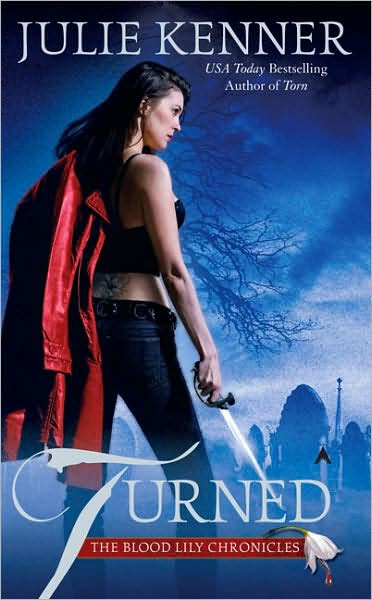 Turned (The Blood Lily Chronicles #3) by Julie Kenner (Ace, Mass Market Paperback 12/05/2009) – Another series about a hunter of the undead, this is the third book in a trilogy.

When Lily Carlyle died in an act of vengeance, she came back as an assassin for the light. But when she discovered her masters' true darkness, she decided to choose the right side for once...Her own.

With her cover as a double agent inside the forces of evil blown, Lily has no choice but to go underground. She takes along a cadre of warriors: humans, angels, demons, and other trusted creatures. Their only hope is to stop the forces who are attempting to use the Ninth gate as a wedge that will unleash the fury of Hell. 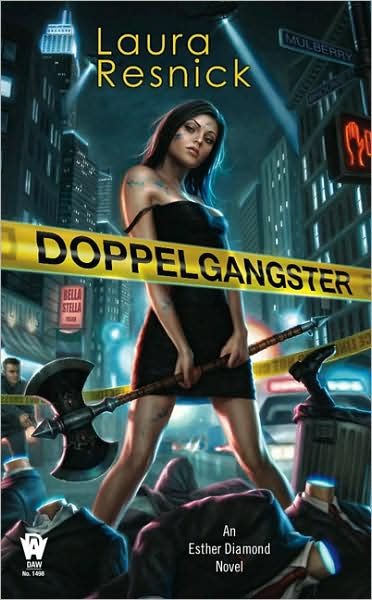 In Laura Resnick's Doppelgangster, the New York actress is 'resting' between roles by working as a singing waitress at a Manhattan mob restaurant because wiseguys tip well. Then duplicated gangsters appear, bullets start flying, and it's up to Esther and her friend Max the Magician to fight Evil by stopping the gang war before it starts killing the wrong people. And if she has time, maybe Esther can actually keep a hot date with her hunky detective friend Lopez, who doesn't believe in magic. Yet. Unplug the phone and settle down for a fast and funny read. 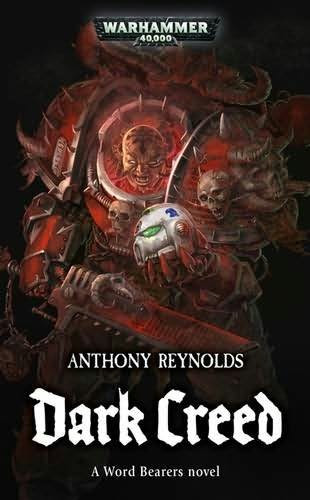 Dark Creed (Warhammer 40,000: Word Bearers) by Anthony Reynolds (Black Library Mass Market Paperback 12/19/2009) – This is the third book in one of BL’s many Warhammer sub-series.

Dark Apostle Marduk face challenges from within his own Legion as he wages war with the White Consuls Space Marine Chapter. Harnessing the power of the Nexus Arrangement, a powerful necron device, Marduk can turn the tide in the Word Bearers' favour. But just as the White Consuls are on the verge of defeat an old enemy returns to throw the entire dark crusade into ruin. If Marduk is to survive and fulfill his ambition, he must defy an onslaught from the necrons, the White Consuls and his own legion.