BEA, the annual Book Publishing Conference was this week and we are approaching the Memorial Day Weekend. So 1 + 1 = 2, with 2 being a relatively slow week of arrivals at the ‘o Stuff. 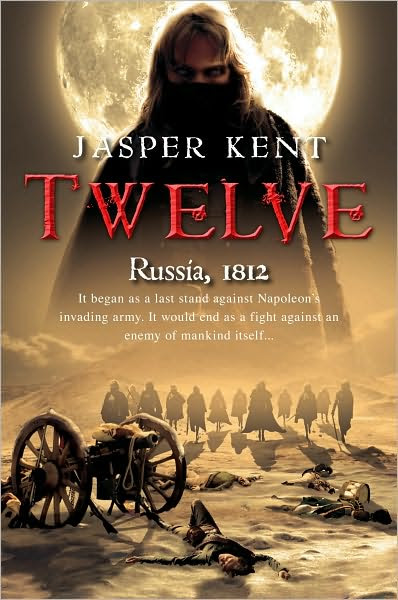 Twelve (Book 1 of the Danilov Quintent) by Jasper Kent (Pyr Trade Paperback 09/01/2010) – This book received a fair amount of praise when it was published in the UK in January 2009. Mark/Hobbit read the UK version and had good things to say.

It began as a last stand against Napoleon’s invading army. It would end as a fight against an enemy of mankind itself…

As his face came close to mine, a sudden miasma surrounded me, the stench of his breath. I recalled years ago standing over a mass grave where the bodies of brave soldiers had been lying for many days. It was that same odour of decay and I felt the same urge to run as I had then, accompanied by an even deeper sense of dread which I could not place...

The voordalak – a creature of legend; the tales of which have terrified Russian children for generations. But for Captain Aleksei Ivanovich Danilov – a child of more enlightened times – it is a legend that has long been forgotten. Besides, in the autumn of 1812, he faces a more tangible enemy – the Grande Armée of Napoleon Bonaparte.

City after city has fallen to the advancing French, and it now seems that only a miracle will keep them from Moscow itself. In desperation, Aleksei and his comrades enlist the help of the Oprichniki – a group of twelve mercenaries from the furthest reaches of Christian Europe, who claim that they can turn the tide of the war. It seems an idle boast, but the Russians soon discover that the Oprichniki are indeed quite capable of fulfilling their promise…and much more.

Unnerved by the fact that so few can accomplish so much, Aleksei remembers those childhood stories of the voordalak. And as he comes to understand the true, horrific nature of these twelve strangers, he wonders at the nightmare they’ve unleashed in their midst ...

Full of historical detail, thrilling action and heart-stopping supernatural moments, Twelve is storytelling at its most original and exciting.

Shadow’s Son by John Sprunk (Pyr Trade Paperback 06/01/2010) – Debut novel which has been generating some good buzz ‘round the intarwebs. John hangs out at the SFFWorld Forums and has been a solid member. This book has a really nice cover by Michael Komarck.

In the holy city of Othir, treachery and corruption lurk at the end of every street, just the place for a freelance assassin with no loyalties and few scruples.

Caim makes his living on the edge of a blade, but when a routine job goes south, he is thrust into the middle of an insidious plot. Pitted against crooked lawmen, rival killers, and sorcery from the Other Side, his only allies are Josephine, the socialite daughter of his last victim, and Kit, a guardian spirit no one else can see. But in this fight for his life, Caim only trusts his knives and his instincts, but they won't be enough when his quest for justice leads him from Othir's hazardous back alleys to its shining corridors of power. To unmask a conspiracy at the heart of the empire, he must claim his birthright as the Shadow's Son.... 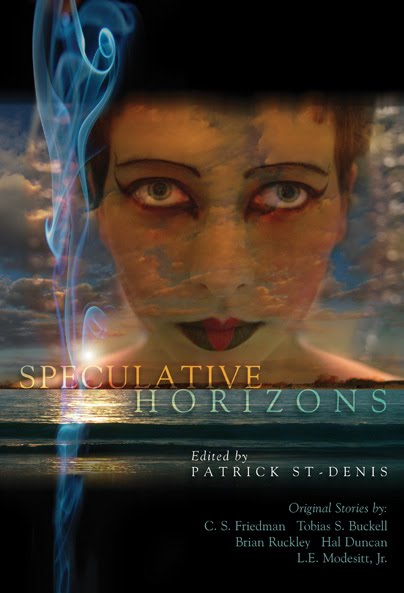 Speculative Horizons edited by Patrick St-Denis (Supterranean Press, Limited Edition 06/16/2010) – Blog and SFFWorld pal Pat (of the Fantasy Hotlist) brought together a pretty impressive group of contributors for this anthology. Publishing in November, proceeds from the book go to the American Cancer Society.

Speculative fiction is wide in scope and styles, and Speculative Horizons showcases the talent and storytelling skills of five of the genre’s most imaginative voices:

In C. S. Friedman’s “Soul Mate, it’s love at first sight for Josie at the arts and crafts festival when she meets the handsome Stephan Mayeaux. It all sounds too good to be true until her newfound boyfriend starts to act strangely and unexplained occurrences begin to take place around her.

In Tobias S. Buckell’s The Eve of the Fall of Habesh, contragnartii Jazim must carry out one final assignment before the armies of the Sea People lay waste to the city he loves.

L. E. Modesitt, Jr. returns to the universe of his bestselling Recluce saga in The Stranger. A young herder’s existence will be forever changed by the unexpected arrival of the black-clad man recounting tales of angels living on the summit of the Roof of the World.

In Flint, Brian Ruckley introduces us to a young and inexperienced shaman who must venture into the spirit world to discover the source of the sickness which afflicts his tribe before they are all wiped out.

Talk to any cop working for Homicide, Narcotics, or Vice, and they’ll tell you that they get the worst cases imaginable. But in Hal Duncan’s The Death of a Love, you realize that they have nothing on Erocide.

Email ThisBlogThis!Share to TwitterShare to FacebookShare to Pinterest
Labels: Books in the Mail, Pyr, Subterranean Press