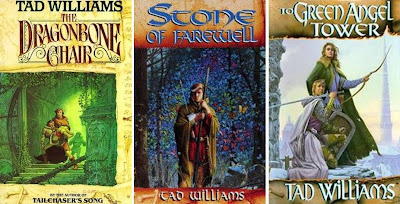 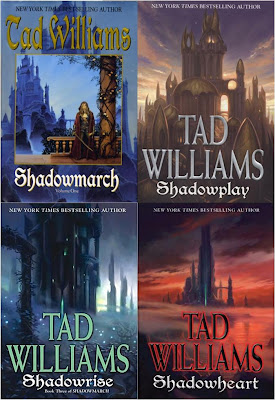 
In the interview, we touch on Shadowmarch, Tad's experience writing for DC Comics, and the craft of Writing in general.

So, go on and click over to the interview and check out what Tad had to say for himself!

I could probably give a nice overview of Tad's work, but it is easier pointing Adam’s terrific Author Profile of Tad Williams. Adam gives a nice assessment of Tad Williams place in the genre, though I’m much more positive in my reaction to Memory, Sorrow and Thorn. Adam also gives Otherland a great overview and some well-deserved praise.

I’ll just add a bit about War of the Flowers, which shows that Mr. Williams can contain his epic storytelling to one volume. The novel is a “crossover,” wherein a young, somewhat successful musician is pulled into a world where magic runs the world. This world in which the protagonist Theo Vilmos has a great feel – part steampunk, part elfpunk, part epic, part urban fantasy. All told, a very engaging novel and despite its nature as a stand-alone novel, one whose fictional world is rich enough for repeat visits.

His young adult novel, The Dragons of Ordinary Farm, the launch of a new series written with his wife, was a lot of fun, too. It is exactly the type of book I would find myself reading and re-reading in my youth.
at 5/04/2010