As my blog posts have indicated, I’m on something of a Tad Williams kick, what with the recent interview, which brings me to the latest review Shadowplay the second installment of his Shadowmarch saga: 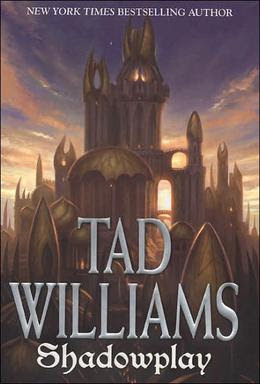 Williams often flings out a wide canvas of characters, so while the twins are the major protagonists, Shadowplay also focuses on many supporting characters. The troupe in which Briony finds herself after journeying over the land with Shaso is a close knit, if eccentric bunch. Shaso was one of the characters in Shadowmarch who stood out the most to me, so I was hoping to see a bit more of him in the second volume. Conversely, Vansen walks into the spotlight next to Barrick. His development, both emotional and mental, was one of the strongest aspects of the novel. The interaction between Vansen, Gyir and Barrick especially stood out for me as a great thread of enemies coming together to combat a greater foe.

Though seen more through other character’s eyes, the Autarch Sulepis is an imposing force throughout the novel. The ruler fashions himself a god and his will is difficult to defy. The character of Qinnitan, once part of the Autarch’s hive (i.e. brothel), who escaped in the first volume is still in hiding. She has a chance encounter with Olin, which though small in and of itself, holds great portentous weight and may prove a keystone scene in the series or perhaps a hint of deeper character relations.

Also up at SFFWorld is an interview Art conducted with the legendary Michael Moorcock, so head over there and read it.
at 5/11/2010