Two reviews this week at SFFWorld, one from me and one from PeterWilliam. 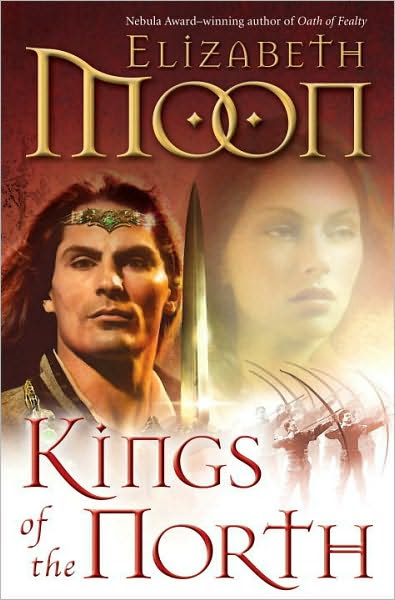 Early in the novel, potential princesses visit Kieri in the hope of becoming his betrothed and mother of his children. Kieri has no interest, partially because he was married once, and more so because he wishes to marry out of love rather than for a simple union. One of the potential mates the Pargunese girl Elis, turns out to have murderous, albeit half-feigned and reluctantly murderous, intentions. When Kieri speaks to Elis and eventually her father, Torfinn, a clash of wills is unavoidable. However, and this is where I think Moon really does some great things in the book, the two rulers actually talk rather than fight. Torfinn is initially taken aback by Kieri’s eventual proper treatment of him and the shedding of preconceived notions on the part of both men came across as genuine, honest, and helped to keep the narrative flowing nicely.

As mentioned earlier, Kieri does not rule Lyonya alone, for his Elven grandmother the Lady rules alongside him. Through the course of the novel, the Lady becomes more distant, easy to anger, and less helpful than she should be. This mirrors the shaky relationship between humans and elves in the world. As Kieri realizes he may have found the woman to marry, he presents her to the Lady only to be shot down once again, further angering the new King and driving his potential wife to leave in favor of keeping the peace. What she finds, after leaving the King’s realm, is something older and more powerful than she, or anybody, could have ever imagined.

PeterWilliam, a fellow fan of Stephen R. Donaldson and Tad Williams, took a look at the most recent installment of Mr. Donaldson’s Chronicles of Thomas Covenant saga Against All Things Ending:

The tale unfolds through five main, and sequential, acts. In labeling them, according to their setting, they are: Andelain, Gravin Threndor (Mount Thunder), the Spoiled Plains (where the group splits), Muirwin Delenoth (a region south of Kurash Qwellinir, i.e. the Shattered Hills, which ring Foul's Creche - Avery's party) and Ridjeck Thome (the proper name for Foul's Creche - Covenant's party). Those who love and defend the Land are confronted by numerous enemies and an impending apocalypse. Throughout this tale, lives are lost, choices are made and consequences are borne, willingly or not.

Throughout, Linden Avery and Thomas Covenant are their typical selves. Surely, there has been some dislike of the two characters over time. However, it seems most likely that the antipathy for the characters stems from the characters' penchant for: 1) unintentional destruction and damage, 2) subsequent self-doubt and loathing and, 3) the emotional or mental paralysis suffered by the character consequently. Such circumstances can be disheartening and drive one to look away when descried in another. Perhaps because it brings on a disturbing sense of discomfort - reminding us of similar events we have suffered. No sane person wants to go there ever again.