On Basilisk Station by David Weber, plus Mamatas Interviewed

As I’ve recounted quite a bit on the ‘o Stuff, David Weber is climbing my list of favorite writers, thanks to his epic Safehold saga, so I figured I should try the series that really put him on the map, Honor Harrington, specifically, the launch of the series On Basilisk Station. My review went up at SFFWorld today: 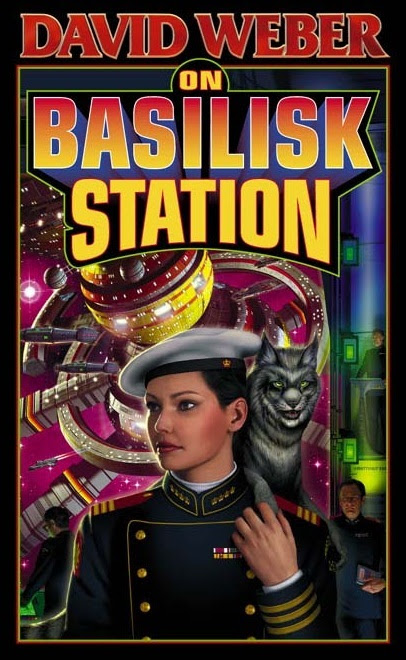 Though Weber’s first novel was published in 1990 - Insurrection - a collaboration with Steve White on a novel based on the Starfire board game, and his first solo novel – Mutineer's Moon –published in 1991, it was On Basilisk Station that really gave an indication of greater things to come.
…
On Basilisk Station introduces readers to Commander Honor Harrington of the Royal Manticoran Navy upon her graduation from the Academy. Despite much promise, she is given a ship that is stripped down so suffers defeat and is assigned (more like banished) to the titular Basilisk Station. The only relief is that her nemesis from the Academy, who is in charge of the Basilisk Station, leaves to have his ship repaired thus leaving Harrington in charge of the problematic station. Honor soon discovers much clandestine and black market activity on the Station which had been allowed to occur for years as those who run the station, for lack of a better term, turned a blind eye. It is here that Weber begins to further flesh out his future universe, hinting at the divide present in a galactic society. Furthermore, this novel begins to establish the two primary powers – the aforementioned Star Kingdom of Manticore and the Republic of Haven.
.

Mark interviewed outspoken writer Nick Mamatas recently for SFFWorld, which can be found here.
,
Another friendly reminder about the book club discussions at SFFWorld for May 2011:
The Keepby F. Paul Wilson
BlackOut by Connie Willis

Great review. With your recommendation to check out "On Basilisk Station", I will have to pick it up.