Here’s the weekly round-up of books that arrived in my mailbox/in front of my garage/on my porch, depending on the carrier who delivered the books. 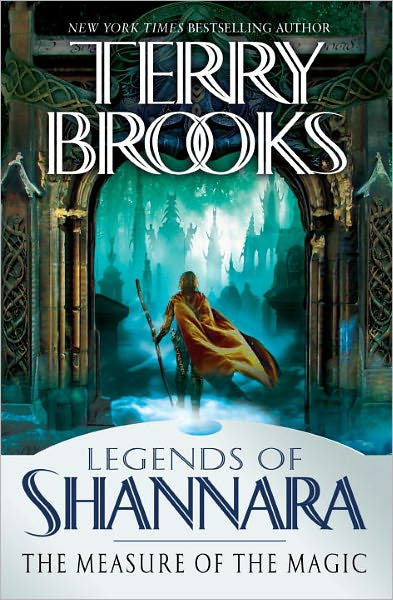 The Measure of the Magic (Legends of Shannara) by Terry Brooks (Hardcover 8/30/2011 Del Rey) – I've said it before, I find him a frustrating writer in that I like the concepts of what he wants to do, but my reading sensibilities don't always agree with his execution of those concepts. I really enjoyed The Scions of Shannara when I read it and think Brooks is one of the most important fantasy writers of the last 25-30 years.

For five hundred years, the survivors of the Great Wars lived peacefully in a valley sanctuary shielded by powerful magic from the blighted and dangerous outside world. But the enchanted barriers have crumbled, the borders have been breached by predators, and the threat of annihilation looms large once more. Sider Ament, bearer of the last black staff and its profound power, devoted his life to protecting the valley and its inhabitants—and, in his final moments, gave stewardship of the black staff to the young tracker Panterra Qu. Now the newly anointed Knight of the Word must take up the battle against evil wherever it threatens: from without, where an army of bloodthirsty trolls is massing for invasion; and from within, where the Elf king of Arborlon has been murdered, his daughter, Princess Phryne Amarantyne, stands accused, and a heinous conspiracy is poised to subjugate the kingdom. But even these will pale beside the most harrowing menace Panterra is destined to confront—a nameless, merciless figure who wanders the devastated land on a relentless mission: to claim the last black staff . . . and the life of he who wields it. 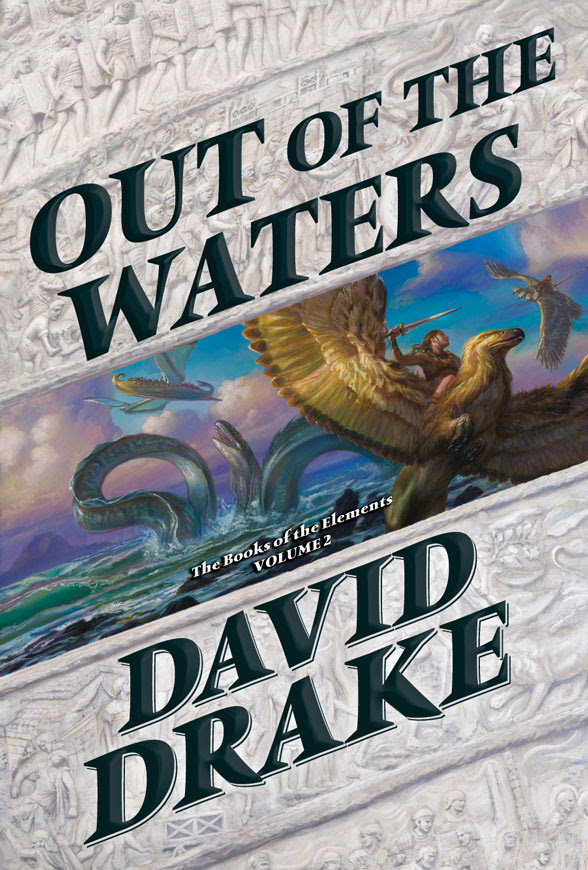 Out of the Waters (Books of the Elements #2) by David Drake (Tor, Hardcover 07/19/2011) – Drake is a giant in Military themed fantasy and science fiction. This is the second book in “a series of four fantasy novels set in a city and empire named Carce, which very similar to that of Rome in 30 AD.” Drake mixes myth and magic with history


The second novel of The Books of the Elements.

The wealthy Governor Saxa, of the great city of Carce, has generously and lavishly subsidized a theatrical/religious event. During this elaborate staging of Hercules founding a city on the shores of Lusitania, strange and dark magic turns the panoply into a chilling event. The sky darkens and the waves crash in the flooded arena. A great creature rises from the sea: a huge, tentacled horror on snake legs. It devastates the city, much to the delight of the crowd. A few in the audience, although not Saxa, understand that this was not mere stagecraft, but something much darker and more dangerous. If all signs are being read right, this illusion could signify a dreadful intrusion of supernatural powers into the real world. Saxa’s son, Varus, has been the conduit for such an event once before.

This new novel in David Drake’s chronicles of Carce, The Books of the Elements, is as powerful and elaborate as that fantastic theatrical event, a major fantasy for this year. 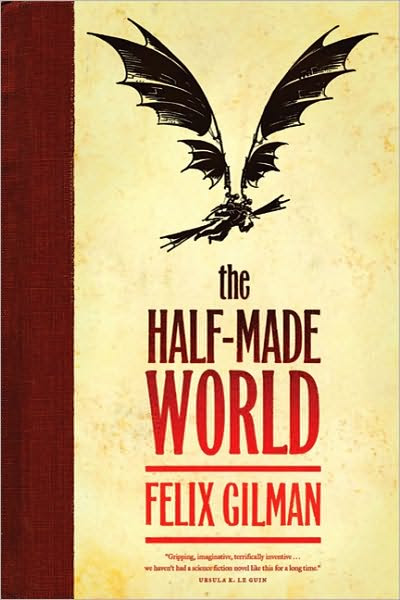 The Half-Made World by Felix Gilman (Tor Trade Paperback 07/19/2011) – I read the author’s debut Thunderer and was a bit let down, especially after the early buzz I’d seen about the book. This looks to be set in a different world.

The world is still only half-made. Between the wild shores of uncreation, and the ancient lands of the East lies the vast expanse of the West—-young, chaotic, magnificent, war-torn.

Thirty years ago, the Red Republic fought to remake the West—-fought gloriously, and failed. The world that now exists has been carved out amid a war between two rival factions: the Line, enslaving the world with industry, and the Gun, a cult of terror and violence. The Republic is now history, and the last of its generals sits forgotten and nameless in a madhouse on the edge of creation. But locked in his memories is a secret that could change the West forever, and the world’s warring powers would do anything to take it from him.

Now Liv Alverhuysen, a doctor of the new science of psychology, travels west, hoping to heal the general’s shattered mind. John Creedmoor, reluctant Agent of the Gun and would-be gentleman of leisure, travels west, too, looking to steal the secret or die trying. And the servants of the Line are on the march.
. 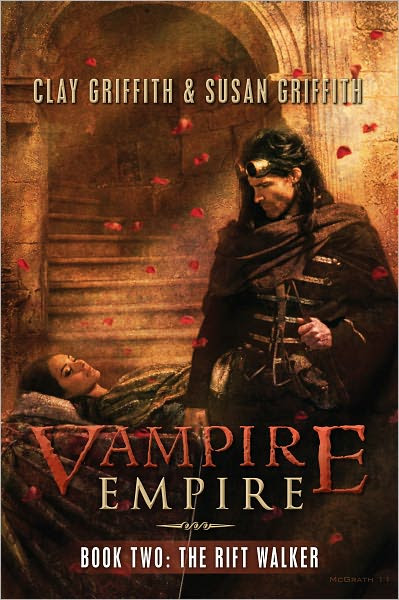 The Riftwalker (A Vampire Empire #2) by Clay and Susan Griffith (Pyr Trade Paperback 09/09/2011) – Second novel in the Griffith’s entertaining mix of Steampunk and Vampire Romance..

Princess Adele struggles with a life of marriage and obligation as her Equatorian Empire and their American Republic allies stand on the brink of war against the vampire clans of the north. However, the alliance's horrific strategy for total victory drives Adele to abandon her duty and embark on a desperate quest to keep her nation from staining its hands with genocide. Reunited with her great love, the mysterious adventurer known to the world as the Greyfriar, Adele is pursued by her own people as well as her vengeful husband, senator Clark. With the human alliance in disarrray, Prince Cesare, lord of the British vampire clan, seizes the initiative and strikes at the very heart of Equatoria.

As Adele labors to bring order to her world, she learns more about the strange powers she exhibited in the north. Her teacher, Mamoru, leads a secret cabal of geomancers who believe Adele is the one who can touch the vast power of the Earth that surges through ley lines and wells up at the rifts where the lines meet. These energies are the key to defeating the enemy of mankind, and if Princess Adele could ever bring this power under her command, she could be death to vampires. But such a victory will also cost the life of Adele's beloved Greyfriar.

The Rift Walkeris the second book in a trilogy of high adventure and alternative history. Combining rousing pulp action with steampunk style, the Vampire Empire series brings epic politcal themes to life within a story of heartbreaking romance, sacrifice, and heroism. 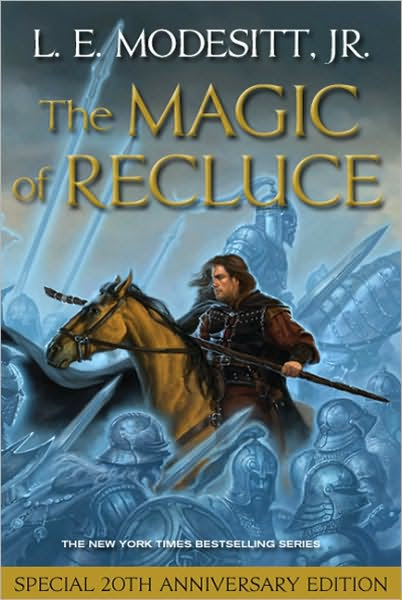 The Magic of Recluce (The Saga of Recluce #1) by L.E. Modesitt, Jr. (Tor Paperback 06/20/2011) – 20th Anniversary edition of one of Tor’s cornerstone Big Fat Fantasy novel series of the nineties and perhaps Modesitt’s best-known work.

An epic adventure world that has so far spanned fifteen novels and has run for twenty years was launched inThe Magic of Recluce, a triumph of fantasy. Young Lerris is dissatisfied with his life and trade, and yearns to find a place in the world better suited to his skills and temperament. But in Recluce a change in circumstances means taking one of two options: permanent exile from Recluce or the dangergeld, a complex, rule-laden wanderjahr in the lands beyond Recluce, with the aim of learning how the world works and what his place in it might be. Many do not survive. Lerris chooses dangergeld.

When Lerris is sent into intensive training for his quest, it soon becomes clear that he has a natural talent for magic. And he will need magic in the lands beyond, where the power of the Chaos Wizards reigns unchecked. Though it goes against all of his instincts, Lerris must learn to use his powers in an orderly way before his wanderjahr, or fall prey to Chaos.

This twentieth anniversary edition will feature an all-new cover and include the Recluce map, plus a new foreword from the author.

Down to the Bone (Quantum Gravity Book Five) by Pyr Trade Paperback August 2011) – As I’ve said before I read the first one (Keeping it Real), while Hobbit/Mark read the first and second (Selling Out) and he seems to enjoy them more than I do.

Lila Black faces her greatest challenge yet as she takes herself, her dead lover, and the AI in her head into death’s realm …

Lila Black is now a shape-shifting machine plugged into the Signal—the total dataset of all events in the known universe and all potential events; Zal, the elf rock star with a demon soul, is now a shadow form animated and given material actualization by firelight; Teazle the demon has taken up the swords of Death and is on the way to becoming an angel. To say this puts some pressure on their three-way marriage is an understatement.

Meanwhile the human world is seeing an inexplicable influx of the returning dead, and they’re not the only ones. Many old evils are returning to haunt the living following three harbingers of destruction created in the ancient past.

What seems epic is revealed as personal to all concerned as events unfold and that which cannot be escaped must be faced. Heroic destinies unravel as greater powers reveal themselves the true masters of the game.

I have that edition of The Magic of Recluce, and it's so damned disappointing. It's ridiculously floppy, as an example, plus someone screwed up. The book claims there's 15 Recluce novels, but if you count them in the bibliography or read Megan/Robin's piece then you'll know there's 16. Whoops.

I'm also really behind on Brooks. I started Landover #2 (The Black Unicorn) today, and I've not even started on Shannara.

I've noticed Tor's tradepaperbacks have been rather...floppy. I've had RECLUCE on my radar for years, so I'll probably read this one.

I hope you enjoy it, Rob. I quite enjoyed it. Modesitt is very, very dry reading, though, so don't be discouraged. There's often a lot to take in, but I'm sure you'll enjoy it.