Two more reviews this week at SFFWorld, I’ll start with mine. I took a look at a novel that launches both a trilogy The Chaos Knight trilogy, and an author’s novel writing career: Sword of Fire and Sea by Erin Hoffman:

Hoffman throws the reader directly into the fray with little preamble or wasted time, somewhat refreshing for a novel set in such a richly developed world. As Vidarian progresses through the story and communicates through a mental bond with the Gryphons, I couldn’t help but be reminded of the Dragons from Anne McCaffrey’s Pern saga. Where the similarities end; however, is in the assertiveness of Hoffman’s Gryphons who are much more in tune with Andovar, the world in which the novel takes place. There’s a sense these beings are comprised of a portion of magic, or at the very least, have a direct connection to the source of magic in the world. Hoffman’s use of the Gryphons as something both intimate, because of how Vidiarian and the other characters communicated with them, as well as foreign and magical, in the way they possess a shared knowledge and power of magic, is perhaps the strongest element of the novel. Through her characters, Hoffman imbues the Gryphons with a true sense of awe, and an initial feeling of them being the Other.
…
The shortness of the novel may be both its strength and weakness. It seems clear that Hoffman is telling a longer story in a very well-developed world, both from a historical perspective (hinted and explained events prior to the novel, magic) and a global perspective (societies, cultures). Sword of Fire and Sea could have benefited from some more development of the characters to complement the hinted at developed world and backstory which serves as a pre-amble to the novel. I also felt as if some scenes weren’t entirely connected, things seemed to happen without a direct connection and I found this to be a major strike at the plausibility in Vidarian and Ariadel’s relationship.


Joey’s (Erfael) tear through short-fiction continues with the July/August 2011 issue of Magazine of Fantasy and Science Fiction edited by Gordon van Gelder: 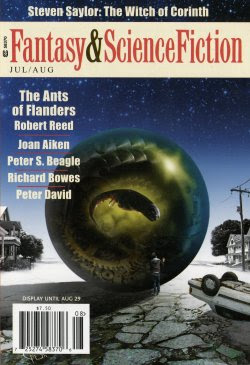 The July/August issue contains 9 short stories, 5 columns, and a number of cartoons. As sometimes happens with an issue, there seems to be a recurring theme this month: Many of the stories either deal directly or indirectly with the loss of family members or loved ones.
…
In his first F&SF story in over a decade Peter David tells us of "Bronsky's Dates With Death". Bronsky suffers from a condition which forces him to speak honestly of anything that comes to mind. As he ages, he becomes more and more focused on his death, which he doesn't fear. In time, Death invites him to a meeting where he informs Bronsky that his frank candidness about his inevitable death is preventing it. Death can't work when he's his coming is both expected and welcomed. Bronsky and Death have a number of meetings over the course of the story. In his way, Bronsky speaks frankly about these meetings to his wife and daughter, who become understandably concerned for him. These various encounters with an exasperated death are quite funny. Between all that are the very real concerns Bronsky's wife and daughter have for his health. In the end David turns all the humor around and gives us a heartfelt finish where everyone gets what he or she wants or deserves.