Firedrake, Realms of Fantasy, and The Departure at SFFWorld

We’ve been averaging two to three new reviews per week at SFFWorld lately, and this week is no exception, one from me, one from Erfael/Joey, and one from Mark/Hobbit. I’ll do the link/cover/review blurb in that order.

I returned to the worlds of Warhammer 40,000 with the second book in Nick Kyme’s Tome of Fire Trilogy, Firedrake 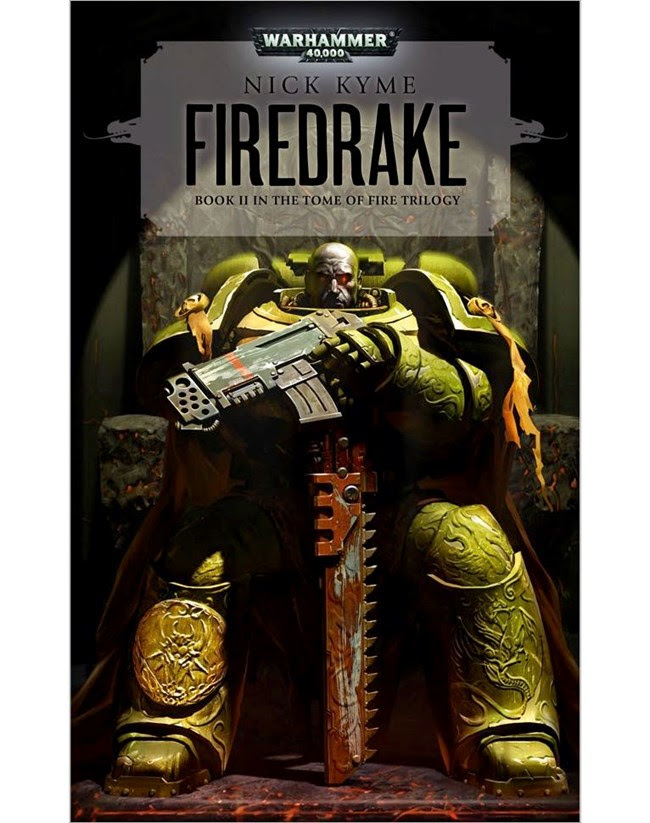 Nick Kyme continues the story of a group of Salamanders, a unit of Space Marines in the military force of the Emperor’s Imperium of Man, in Firedrake, the middle book of the Tome of Fire Trilogy. Picking up not quite immediately from the events of Salamander, Kyme follows two storylines throughout the novel, one of which continues Da’Kir’s story, whose dreams and past continue to haunt him as he becomes initiated as a Lexicanum in the Librarium, in other words, the lowest rank of a military Librarian responsible for overseeing communications, memoirs, history of the chapter, as well as providing support in psychic battles against enemies of the Imperium of Man. As a Da’Kir undergoes the initiation rituals under Pyriel, Da’Kir’s dreams may have a large meaning, and Da’Kir himself may be the one prophesized in the legendary Tome of Fire, the bible for the Salamanders.
…
As he follows two storylines, Kyme plots them in different fashions. For Da’Kir’s story, it is a very mythic and singular journey. Da’Kir searches within himself, takes part in a symbolic, mental, and metaphysical struggle to become a member of the Librarium. I thought these scenes provided a sense of power, not just for Da’Kir, but for the overall mythology of the Salamanders themselves. This ‘hero’s journey’ also served to show how, even though the Salamanders are part of the overall Imperium of Man, they have a unique almost nationalistic identity that is their own.


Another review of short fiction from Joey/Erfael, this time the August 2011 Realms of Fantasy

This issue contains 5 short stories, an article on female fantasy artists, a Folkroots column on monsters, and a full complement of reviews of fiction (epic fantasy, urban fantasy, YA fantasy), games (PnP and electronic), graphic novels, and movies.…

The final short story of the issue, Alan Smale's "Leap of Faith" brings us an other-dimensional retelling of the fall of Sodom, or in this case Shadom. The main character, Levi, seems to be some sort of engineer or construction worker doing God's work in helping to shape the world. While his exact role is never made clear, the impacts of his work are: He leaves his family for months at a time, and when he comes back he has difficulty adjusting back to normal life. This story picks up just as he's returning from one of his times away from home when he's approached by a pair of "angels", bluish fellows who seem to know that the town is in trouble. In fact, they're there to save Levi and his family because they're the only good people in Shadom and God has further work for them. The family drama here and the way it fits into the Biblical story is interesting. There are some turns of phrase that feel very out of place in the setting until one realizes that this may not be a world quite like our own. This was an engaging, enjoyable story on which to close the issue's fiction section. RECOMMENDED

Mark returns to a favorite, Neal Asher, for a review of what turns out to be a new series titled The Owner, the first of which is The Departure:

Things in this dystopia are generally not good. A too-large population using too many of its finite resources without the luxury of expansion means that life for many is arduous. The idea that ‘Power Corrupts’ is important here, and there’s clearly something rotten in the socio-political structures of the 22nd century. The world government administrators live in luxury, whilst the ZA (Zero Asset) people, who contribute nothing to the economy, exist on a bare minimum with limited health care and facilities.
…
It’s all pretty fast, dramatic stuff. We have city riots, shootings, space planes destroyed, the deliberate bombardment of the Earth from space, and combat in space aided by construction robots. As you might therefore expect, the body count is very high (though that is something that you rather expect with Neal’s books.) This is definitely not one for the faint hearted in that respect, with body parts flying around and blood splashing many a wall.

Similarly, like many of Neal’s other books there’s also lots of cool gadgets: the robot-like Shepherds ensuring control, spider guns (robotic tanks), readerguns (that can recognise their targets before shooting them), space planes with scram jets and lots and lots of lethal guns.