Today, I posted my review of Caine’s Law by Matthew Stover, one of my favorite writers in any genre. To say I was looking forward to this novel is an understatement. As I intimate in my review, this was probably the first time I was a bit daunted at writing a review.

Check out the cover, review excerpt and the link to the review 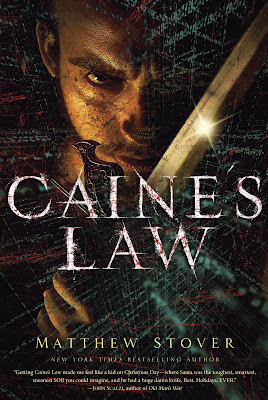 This all brings us to Caine’s Law, the second Act of Atonement. Like the previous novels in the sequence, the narrative structure of Caine’s Law isn’t exactly straightforward. Stover employs first person narrative, third person omniscient, as well as narrative from the point of view of multiple characters. Originally titled His Father’s Fist, this fourth novel in Stover’s Acts of Caine sequence focuses a great deal on Hari Michaelson’s father, Duncan Michaelson. Not that Hari Michaelson and his alter-ego Caine (who are very much one and the same now) don’t play the part of protagonist, but Duncan is one character just to the left of Caine at the center of the story. In fact, Duncan is the element of the novel that drives nearly all of the action but he is much more than a simple MacGuffin. The other character, you might say to the right of Caine’s center, is a woman known only as the horse-witch, a woman of none-too-many words whose often peaceful and calm manner are very much the opposite of Caine’s violent and volatile character.
...
As I was reading the novel, I could not get out of my head the resonance of the overall theme and feeling I felt between Caine’s Law and the great ”Last Superman Story” Whatever Happened to the Man of Tomorrow by Alan Moore. The same sense of nostalgia, past coming forward to effect the present, and almost bittersweet melancholia pervaded the story for me. By many, Alan Moore is considered the greatest storyteller in the history of comic books and his “Last Superman Story” is considered a defining moment for the character and quite possibly the template by which any hero should get their sendoff from being a hero. Put another way, it’s a comic book story I have to revisit very regularly because to me, it’s just that damned good. With Caine’s Law, Stover has achieved very much a similar effect with Caine’s story and supposed send off in this novel. I only say supposed because The Acts of Caine was never intended to be a series and two of the books in the series were, according to Stover himself, written as the last story for Caine.