Well before The Lost Fleet by Jack Campbell was published to huge success in the Science Fiction genre Cambell, under his real name, John G. Hemry published another Military SF series, Stark’s War. With the success of The Lost Fleet, the Stark’s War books were reissued with new covers and Campbell’s name in big letters. I reviewed the first one, titled aptly enough Stark’s War: 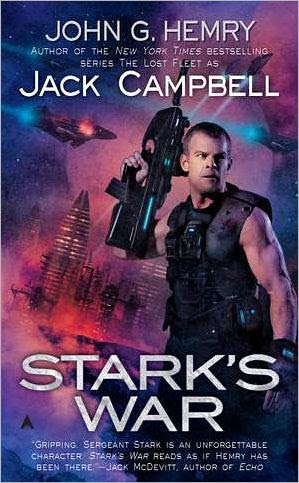 Where Stark’s War differs greatly from his later work in the Lost Fleet is the intimacy of the combat. Much of the fighting is more personal, ground level and not across the distances of space where the combatants more or less direct the combat rather than participate in it. In some scenes, Hemry really put me in the trenches and the most recent novel to do so was T.C. McCarthy’s Germline. With Hemry, those scenes were spaced out more in the breadth of the narrative giving Stark’s War a much less bleak feel than McCarthy’s excellent debut novel.

Stark’s War was an enjoyable novel, though a not quite as polished or fully formed as The Lost Fleet novels I’ve read. I did have a couple problems with the novel, unfortunately. Though short, the book is broken into thirds, or three large chapters. While this works to give the novel a three-act structure, it doesn’t give the reader much of a chance to effectively take a break from the book. A contradictory statement, I realize, but this structure gave me the feel of “pretty long short novel.

Also, Mark was lucky enough to interview one of his favorite writers, Kim Newman

SFFWORLD: The books are known not only for their rapid pace but also for their mixing up of real and fictional characters. Have you always enjoyed mashing up the real and unreal?

Kim: Yes. I suppose a lot of it comes from that 1970s craze – which, in some ways, I'd like to get away from – for looking at characters like Dracula, Mr Hyde, Sherlock Holmes, etc., and unearthing the 'real' Vlad Tepes, Deacon Brodie or Joseph Bell. McNally and Florescu's In Search of Dracula was a big influence on this way of thinking. I now think that all this is interesting but slightly detracts from the real achievements of authors who might have been inspired by historical events and people but then came up with lasting work through their own imagination and efforts. The ultimate version of this is those stories which take Poe or Stoker or HG Wells or Mary Shelley or Lovecraft as lead characters and then get them mixed up with the events of the novels they will write – essentially robbing them of their actual genius and reducing them to diarists. I like some of the books that fit this pattern (Tim Powers' The Stress of Her Regard, especially) but the cumulative effect of them chips away at the reputations of the authors. The mix of real people and fictional ones (and especially borrowed fictional ones) really clicked for me in Doctorow's Ragtime and Nicholas Meyer's The Seven-per-cent Solution. Because I invented the world of Anno Dracula, the characters imported into it are taken out of their original contexts – which gives me the freedom to play with them a bit more than in a straight historical novel or a literary pastiche.