The colony on Venus was not built because the destruction of Earth was possible, but because it was inevitable…

A brilliant young scientist and one of the first humans born on Venus, Arik works tirelessly to perfect the science of artificial photosynthesis, a project crucial to the future of his home, V1. The colony was built on the harsh Venusian surface by the Founders, the first humans to establish a permanent extraterrestrial settlement. Arik’s research becomes critical when he awakens from an unexplained, near-fatal accident and learns that his wife is three months pregnant. Unless Arik’s research uncovers a groundbreaking discovery, V1’s oxygen supply will not be able to support the increase in population that his baby represents.

As Arik works against time, he begins to untangle the threads of his accident, which seem inextricably linked to what lies outside the protective walls of V1—a world where the caustic atmosphere and extreme heat make all forms of known life impossible. For its entire existence, Arik's generation has been expected to help solve the problems of colonization. But as Arik digs deeper and deeper, he discovers alarming truths about the planet that the Founders have kept hidden. With growing urgency and increasing peril, Arik finds himself on a journey that will push him to the limits of his intelligence and take him beyond the unimaginable.

The Eye of the World (Wheel of Time Book #1) by Robert Jordan (Tor Trade Paperback 05/08/2012) – I originally read this fresh out of college way back in the mid/late 90s and started a re-read with The Eye of the World a little over two years ago. This is the third edition of the book I have (MMPB, Hardcover) and this one sports the art used in the eBook editions.

The Eye of the World is book one of The Wheel of Time®, Robert Jordan’s internationally bestselling fantasy series. This edition features cover art by David Grove. The art, which originally debuted on the e-book, will grace bookstores for the first time on this handsome trade paperback edition.

The Wheel of Times turns and Ages come and go, leaving memories that become legend. Legend fades to myth, and even myth is long forgotten when the Age that gave it birth returns again. In the Third Age, and Age of Prophecy, the World and Time themselves hang in the balance. What was, what will be, and what is, may yet fall under the Shadow. 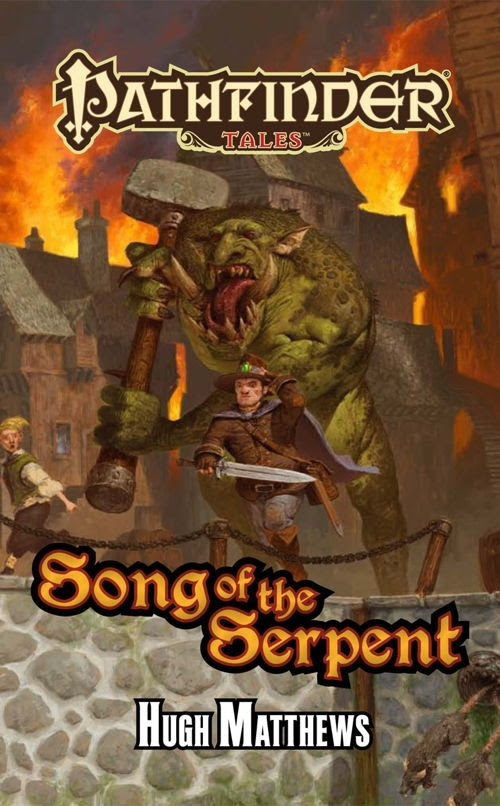 Song of the Serpent (A Pathfinder Tales novel) by Hugh Matthews (Paizo Mass Market Paperback 04/24/2012) – This is the second Pathfinder novel I’ve received though I still haven’t read the first on Death’s Heretic, which I’m looking forward to reading. I’ve read some stuff by Matt Hughes, the real name of Hugh Matthews and a enjoyed it.

To an experienced rogue like Krunzle the Quick, the merchant nation of Druma is full of treasures just waiting to be liberated. Yet when the fast-talking scoundrel gets caught stealing from one of the powerful prophets of Kalistrade, his only option is to undertake a dangerous mission to recover the merchant lord’s runaway daughter—and the magical artifact she took with her. Armed with an arsenal of decidedly unhelpful magical items and chaperoned by an intelligent snake necklace happy to choke him into submission, Krunzle must venture far from the cities of the merchant utopia and into a series of adventures that will make him a rich man—or a corpse. 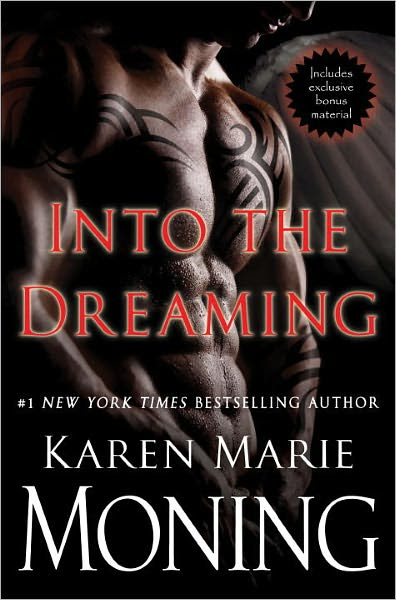 Between the Highlander and Fever worlds lies a place beyond imagining.
This new edition of the novella contains more than 100 pages of bonus material, including:


For the first time in hardcover, here is #1 New York Times bestselling author Karen Marie Moning’s novella Into the Dreaming, a tale of Highland fantasy, star-crossed lovers, and the timeless manipulation of the ancient, immortal Unseelie king. This is Moning at her romantic, funniest finest.
Free him from his ice-borne hell . . .Stolen from his beloved home in the Highlands of Scotland, imprisoned in the Unseelie king’s dark, frosty kingdom, Aedan MacKinnon endured centuries of torture before becoming the icy, emotionless Vengeance, the dark king’s dispatcher of death and destruction in the mortal realm.

And in his century you both may dwell . . .Aspiring romance novelist Jane Sillee has always believed that she was born in the wrong century, but she’s managed to make a decent enough life for herself—if only she could stop having those recurring dreams about a man too perfect to exist.

In the Dreaming you have loved him . . .Haunted every night of her life by a devastatingly sexy Highlander who comes to her while she sleeps, Jane tries to write him out of her head and heart. As a child he protected her, as a woman he loves her.

Now in the Waking you must save him . . .When an ancient tapestry bearing the likeness of her beloved Highlander arrives on her doorstep, Jane is whisked back in time to fifteenth-century Scotland, to the castle of Dun Haakon on the isle of Skye, where she is given one chance to save her dream lover . . . or lose him forever to the Unseelie king.

Caught in a deadly game between the light and dark courts of the Fae, Jane must find a way through the ice to the heart of her Highander. But will the love of one mortal woman be enough to defeat such ancient and ruthless immortal enemies?

Further: Beyond the Threshold by Chris Roberson (47 North Trade Paperback / eBook 05/22/2012) – Although I haven’t read all of Roberson’s fiction, what I have read I’ve enjoyed a great deal.

The thirty-fourth century. Humankind is spread across three thousand light years in a myriad of worlds and habitats known as the Human Entelechy. Linked by a network of wormholes with Earth at its center, it is the world Captain RJ Stone awakens to after a twelve-thousand-year cryogenic suspension.

Stone soon finds himself commanding the maiden voyage of the first spacecraft to break the light speed barrier: the FTL Further. In search of extraterrestrial intelligence, the landing party explores a distant pulsar only to be taken prisoner by the bloodthirsty Iron Mass, a religious sect exiled from the Entelechy millennia before. Now Stone and his crew must escape while they try to solve the riddle of the planet’s network of stone towers that may be proof of the intelligence they’ve come to find.

The first in critically acclaimed author Chris Roberson’s scintillating new series, Further: Beyond the Threshold is a fascinating ride to the farthest reaches of the imagination.

The Gift of Fire / On the Head of a Pin: Two Short Novels from Crosstown to Oblivion by Walter Mosley (Tor Hardcover 05/08/2012) – Mosley is well established a mystery novelist, but he has dabbled in Speculative Fiction. This ‘double’ hearkens back to the old Ace Doubles (which were popular when Tor’s publisher Tom Doherty worked at ACE) and could prove interesting.

The Gift of Fire - In ancient mythology, the Titan Prometheus was punished by the gods for bringing man the gift of fire—an event that set humankind on its course of knowledge. As punishment for making man as powerful as gods, Prometheus was bound to a rock; every day his immortal body was devoured by a giant eagle. But in The Gift of Fire, those chains cease to be, and the great champion of man walks from that immortal prison into present-day South Central Los Angeles.

On the Head of a Pin  - Joshua Winterland and Ana Fried are working at Jennings-Tremont Enterprises when they make the most important discovery in the history of this world—or possibly the next. JTE is developing advanced animatronics editing techniques to create high-end movies indistinguishable from live-action. Long dead stars can now share the screen with today’s A-list. But one night Joshua and Ana discover something lingering in the rendered footage…an entity that will lead them into a new age beyond the reality they have come to know.

Email ThisBlogThis!Share to TwitterShare to FacebookShare to Pinterest
Labels: 47North, Books in the Mail, Chris Roberson, Matthew Hughes, Pathfinder, Robert Jordan, The Eye of the World, Tor, Wheel of Time