Cashore and Lovegrove Reviews at SFFWorld

The theme of this week’s reviews is catch-up and your reviewers are Mark and me.


Mark catches up with the second book in a series just as book three is set to publish. The author of these books is Kristin Cashore and the book is Fire:

Like Graceling before it, Fire is the tale of a young girl, the titular Fire, who is a Graceling: that is, someone who has been born with a special power that enhances the typical capability of a normal human being. Fire’s skill (shown by her rainbow-coloured hair) is the ability to manipulate other people’s thoughts and persuade them to do their bidding. (In another galaxy, some would call it a Jedi-mind-trick.) Living in the Dells, she is initially quite reticent to use such skills, especially against her friends and those who protect her. It also doesn’t help that, as a consequence of her Grace, others are desperate to give her their attention. She has a relationship with her life-long friend Archer, who is fiercely protective of her.
…

What impressed me more this time was that although we have clear heroes and villains in Fire, the outcomes are less predictable here. We see a much bigger view of the world first seen in Graceling, and the importance of ‘monsters’, as mutant creatures who love a bit of human flesh is developed nicely. Whereas Graceling mentioned these monsters on the other side of the world it was mainly focused on the effect of the Grace on Katsa and those affected by her, here we see a wider picture of their world as Fire deals with a harsher environment and the political and social machinations that such a society has. There’s also a lot more sexual content here, though not explicit.


A little behind on my book reviews so I dug out one from the archives which was previously posted elsewhere teh intarwebs but is no longer anywhere. With James Lovegrove recently publishing The Age of Aztec, the fourth in his Pantheon sequence, (and me not having read it yet), I figured a good candidate for expanding is my review of book three in the series, The Age of Odin: 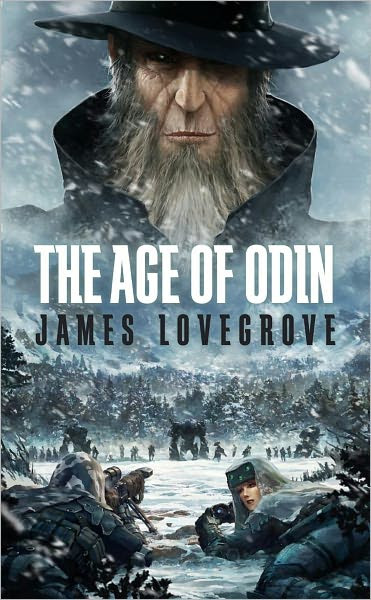 The Norse gods are real, and they are preparing for Ragnarok in the 21st Century by enlisting ex-soldiers into their army through the Valhalla project. … The Age of Odin, by British author James Lovegrove, takes this idea and runs with it full tilt. When Gideon “Gid” Dixon, a retired soldier who realizes the only thing in his life which gave him happiness and success was fighting, is enticed by the aforementioned Valhalla project, he cannot pass up the opportunity to join. Gid has a hard time believing the big man in charge of the Valhalla project is actually the Allfather of Norse Myth, Odin. Odin is preparing for the fated final battle, and as Gid joins Odin’s forces, he brawls with and fights alongside Thor, becomes enamored with Freya, is healed by Odin’s wife Frigga and learns of the treacherous deeds of Loki.

The villain of the piece is, of course, Loki. This should be no surprise as Loki, the trickster and half-brother of Thor, is often cast as the villain in Norse-infused stories, especially those published by Marvel Comics. I also really liked Lovegrove’s characterization of Odin, who at times was quite distant from the action.