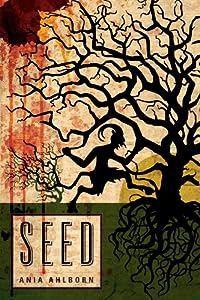 Seed by Ania Ahlborn (47 North Trade Paperback / eBook 07/07/2012) – Another reissue for the folks at 47North, this time of a previously self-published Horror novel.


With nothing but the clothes on his back—and something horrific snapping at his heels—Jack Winter fled his rural Georgia home when he was still just a boy. Watching the world he knew vanish in a trucker’s rearview mirror, he thought he was leaving an unspeakable nightmare behind forever. But years later, the bright new future he’s built suddenly turns pitch black, as something fiendishly familiar looms dead ahead.

When Jack, his wife Aimee, and their two small children survive a violent car crash, it seems like a miracle. But Jack knows what he saw on the road that night, and it wasn’t divine intervention. The profound evil from his past won’t let them die…at least not quickly. It’s back, and it’s hungry; ready to make Jack pay for running, to work its malignant magic on his angelic youngest daughter, and to whisper a chilling promise: I’ve always been here, and I’ll never leave.

Country comfort is no match for spine-tingling Southern gothic suspense in Ania Ahlborn’s tale of an ordinary man with a demon on his back. Seed plants its page-turning terror deep in your soul, and lets it grow wild. 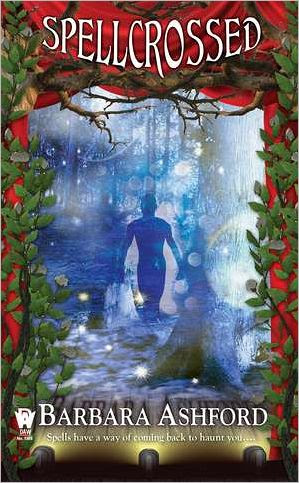 It's not easy losing the magic in your life...

But that's what allowed Maggie Graham to take the first step toward her new life as the executive director of the Crossroads Theatre.

As a hectic new season of summer stock begins, Maggie has to balance the demands of her interfering board president and the needs of a company of actors that includes bewildered amateurs, disdainful professionals, a horde of children, and an arthritic dog.

While Maggie yearns to give her cast members the kind of healing she found at the Crossroads, she recognizes that magic must take a back seat to ticket sales - and Rowan Mackenzie must be consigned to the past.

But magic is hard to banish from the old white barn where the unexpected is as time-honored a tradition as the curtain call. Memories lurk like ghosts in the shadowy wings. And when the tangled spells of Maggie's past turn her life upside down, it will take more than magic to ensure the happy-ever-after ending she longs for… 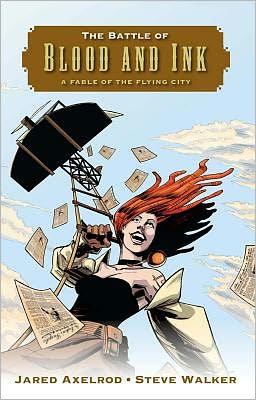 The Battle of Blood and Ink: A Fable of the Flying City by Jared Axelrod and Steve Walker (Tor Hardcover 05/08/2012) – Steampunk illustrated storytelling in the tradition of the Foglio’s Girl Genius

If you’re visiting the flying city of Amperstam without the latest printing of The Lurker’s Guide, you might as well be lost. This one-sheet is written, edited, and printed by Ashe, a girl raised on the streets of the flying city, and is dedicated to revealing its hidden treasures and deepest secrets—including many that the overcontrolling government doesn’t want anyone to know. The stakes are raised when Ashe accidentally uncovers the horror of exactly how Amperstam travels among the skies and garners the attention of those who would rather that secret be kept in the hands of the city’s powerful leaders.

Soon Ashe is on the run from thugs and assassins, faced with the choice of imperiling her life just to keep publishing, or giving in to the suggestion of a rich patron that she trade in her voice and identity for a quiet, comfortable life. It’s a war of confusion for Ashe, but one thing is very clear: just because you live in a flying city, you can’t always keep your head in the clouds. 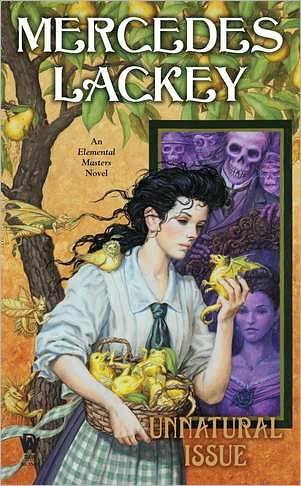 
Unnatural Issue is the seventh book in the Elemental Masters series. It will feature Lord Peter Almsley, from The Serpent's Shadow.

Richard Whitestone is an Elemental Earth Master. Blaming himself for the death of his beloved wife during childbirth, he has sworn never to set eyes on his daughter, Susanne. But when he finally sees her, a dark plan takes shape in his twisted mind- to use his daughter's body to bring back the spirit of his long-dead wife.

Playful and clever, this is the new gloriously imagined novel from China Miéville

On board the moletrain Medes, Sham Yes ap Soorap watches in awe as he witnesses his first moldywarpe hunt.

The giant mole bursting from the earth, the harpoonists targeting their prey, the battle resulting in one’s death and the other’s glory are extraordinary. But no matter how spectacular it is, travelling the endless rails of the railsea, Sham can't shake the sense that there is more to life. Even if his philosophy-seeking captain can think only of the hunt for the ivory-coloured mole she’s been chasing – ever since it took her arm all those years ago.

When they come across a wrecked train, at first it's a welcome distraction. But the impossible salvage Sham finds in the derelict leads to considerably more than he'd bargained for. Soon he's hunted on all sides: by pirates, trainsfolk, monsters and salvage-scrabblers.

And it might not be just Sham's life that's about to change. It could be the whole of the railsea. 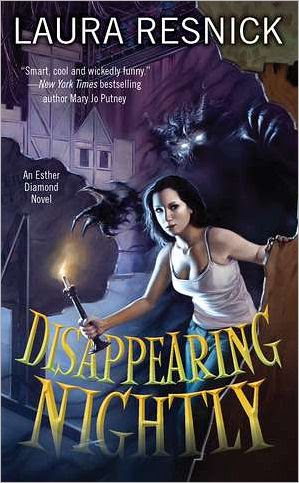 Dopplegangster (Esther Diamond #1) by Laura Resnick (DAW, Mass Market Paperback 06/05/2012) –This is a reissue of the first novel Resnick’s popular Urban Fantasy, which was previously issued with another publisher.

I'm not a heroine--I just play one. Along with psychotics, vamps, housewives and hookers. As my agent is fond of pointing out, there are more actors in New York than there are people in most other cities. Translation: beggars can't be choosers.

This explains how I wound up prancing around stage half naked the night Golly Gee--the female lead in the off-Broadway show "Sorceror!"--disappeared into thin air. Literally.

Now other performers are also vanishing, and a mysterious stranger is warning me: There is evil among us.

But the producers want me to take over Golly's part.

Looks as if I'm going to need a little magical help if I want to keep my starring role....

Scourge of the Betrayer (Bloodsounder’s Arc Book One) by Jeff Salyards (Night Shade Books Hardcover 5/01/2012) – I’ve already seen some very positive things about Jeff’s debut, including favorable comparisons to Joe Abercrombie and Glen Cook. My review for the book goes up Sunday and the short of it is that I was VERY impressed.

Many tales are told of the Syldoon Empire and its fearsome soldiers, who are known throughout the world for their treachery and atrocities. Some say that the Syldoon eat virgins and babies-or perhaps their own mothers. Arkamondos, a bookish young scribe, suspects that the Syldoon's dire reputation may have grown in the retelling, but he's about to find out for himself. Hired to chronicle the exploits of a band of rugged Syldoon warriors, Arki finds himself both frightened and fascinated by the men's enigmatic leader, Captain Braylar Killcoin. A secretive, mercurial figure haunted by the memories of those he's killed with his deadly flail, Braylar has already disposed of at least one impertinent scribe . . . and Arki might be next. Archiving the mundane doings of millers and merchants was tedious, but at least it was safe. As Arki heads off on a mysterious mission into parts unknown, in the company of the coarse, bloody-minded Syldoon, he is promised a chance to finally record an historic adventure well worth the telling, but first he must survive the experience! A gripping military fantasy in the tradition of Glen Cook, Scourge of the Betrayer explores the brutal politics of Empire-and the searing impact of violence and dark magic on a man's soul.