The Kings Blood and Tricked Reviewed at SFFWorld

Mark returns to the weekly Tuesday reviews-at-SFFWorld post, joining me in his usual spot.

You folks know the drill by now, I give a bit about each book, insert the cover image and link to the review.

Mark reviewed one of the most anticipated fantasy releases of the yea, The King’s Blood, the second novel in Daniel Abraham’s The Dagger and The Coin sequence:

After the set up of Book One, things here start to move into new positions. The Apostate is revealed (if it wasn’t already known) as a major character from Book One. Captain Marcus Wester is now at work in his new job, working with his friend Yardem Hane for Magistra Cithrin bel Sarcour and the Medean Bank in Porte Oliva. Cithrin herself is struggling with the restrictions she agreed to in order to keep her position in the Bank in Book One, now working under Pyk Usterhall, a stern notary from the Bank to ensure her transactions are in the traditions of the Medean.

Like an expert chess match, key pieces start to move into place this time around. Some of the actions the characters take are interesting and not what might be expected. The characters themselves become much more developed this time around. We learn more of Wester’s and Cithrin’s past, and we start to get more details of the dragons of the past. Geder in particular is, by turns, thoughtful, scholarly and violent as he reluctantly adjusts to his new position. Throughout the book there’s some life-changing decisions made, life-altering consequences and some major betrayals.


Kevin Hearne burst onto the scene last year with the first three installments of The Iron Druid Chronicles in successive months. The latest installment, Tricked, published in April and my review for it went up at SFFWorld today: 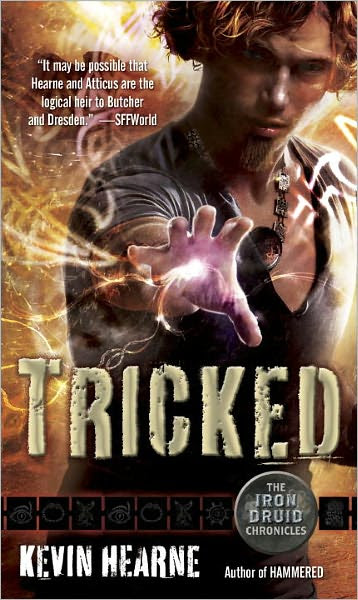 Once Atticus gets on with his new life, it isn’t long before the Native American trickster deity Coyote comes calling on the favor Atticus owes him for ‘killing’ him. It isn’t anything big for our favorite Druid, he just convince the Colorado earth elemental to make a gold mine for Coyote’s people. Of course more complications ensue over the course of the novel as a pair of skinwalkers, some of the nastier monsters of Coyote’s people. Atticus came to the attention of these skinwalkers thanks to Hel, the Norse god of the underworld and Loki’s offspring. Clearly, Atticus and company have their hands quite full.
…

While I breezed through the first three installments of The Iron Druid Chronicles, I felt the pacing was not as well balanced here in Tricked. There’s almost…just almost a sense that Hearne was trying to cover too many plot points in the novel. On the other hand, for a 350 page novel, the fact that he packed so much into so few pages was pretty impressive.

Tricked might even serve as a decent entry point for new readers since Atticus and his crew are indeed starting over after their ‘deaths.’ I get a sense that Hearne has big things in plan for Atticus and Tricked might just be an intake of breath compared to what is facing our Druid power trio down the road.