Another slew of reviews have been posted over the past week including reviews by Kathryn (Loewryn), Mark Hobbit, and myself..


Over the years that I’ve been writing these reviews, I’ve received a handful of novels written by Elizabeth Bear. Much to my chagrin, I hadn’t read any of them though I’ve read nothing but good things about her writing. Well, that has changed with Range of Ghosts the first world in a series she’s calling The Eternal Sky: 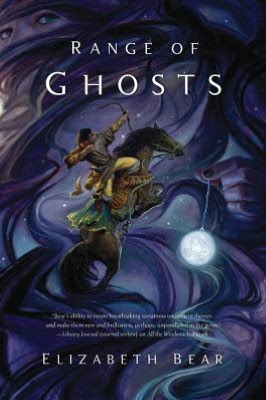 The basic thrust of the story finds Temur coming out of the aforementioned battle along the Celadon Highway and taken in by Edene’s people. A devotion and attraction grows between Eden and Temur, as they travel across the titular Range of Ghosts, Edene is taken away by the ghosts who haunt the trail. He is devastated and soon crosses paths with Samarkar and they attempt to find Edene. Meanwhile, a cult tries to take over the world through subterfuge and behind-the-scenes devilry.
…
I mentioned the resonance in this novel that Bear has constructed so wonderfully, I felt the same power reading Range of Ghosts I did reading and enjoying archetypal myths and folktales that have been around for thousands of years such. While I enjoyed reading the novel in the moment, the sense of gravitas in the story settled in with my imagination after I’d set the novel aside for the day’s reading or even when I completed the novel. In a sense, Range of Ghosts, from my reading experience, can be seen as a successful experiment in modern mythmaking. What is even more promising is that this is just the beginning and Bear has more to tell in this resonant story.

The novel is just over 300 pages, which judged against many other novels considered Epic Fantasy, may be considered a bit slight. It’s possibly a worn-out phrase, but not one word, punctuation mark, or letter is wasted in the telling of Range of Ghosts. It is precise, engaging and powerful.

From the start this story feels great and has a tone and presence that feels both natural and of its time, Tudor England. It reminded me very much of Mark Chadbourn’s Will Swyfte novels, which I‘ve read and reviewed before (and perhaps partly explains why Mark has a glowing comment on the front of this book.) Like Mark’s books, the dialogue is appropriately nuanced, the places reeking with the grubby effluvium and gorgeous splendour of Elizabethan life as you would expect.
…
The book is also slyly about gender and sexuality. Much is about hidden identities. In a subplot, Coby is a girl masquerading as a boy named Hendricks in a troupe preparing for the presentation of a major play held in a competition in honour of the ambassador’s visit. Coby has to not only keep her identity a secret, for to be discovered invites death. She meets Mal in order to train in fighting so that she can fend off the attentions of other males and females in the company, though she harbours a secret love for him. Mal himself has secrets: he once was a member of the Hunters, a secret clan who kill skraylings as part of an initiation ceremony. He has relationships with women but more secretly with his best friend, Ned. Ned himself is forced to betray Mal to people looking for him, which leads to others knowing about Mal’s twin brother, who is insane and secretly kept locked away in a hospital.

Kathryn/Loewryn has been professing her enjoyment of J.A. Pitts’s Norse urban fantasy series Sara Beauhall so she was able to get an early copy of the fourth installment Forged in Fire:

Set immediately after Honeyed Words, Forged in Fire sits in a perfect place to tie up Sarah Beauhall's hectic year. Despite facing and defeating the same dragon twice, becoming a champion of Odin and having her whole world view changed, she remains resolute. Her friends are still nursing the wounds of their initial fight with the dragon Jean-Paul, whilst also working to maintain vigil over the local area, but the stress and fear multiply the tension. To make matters worse, Sarah's life becomes even more chaotic. The core Black Briar group gain new family members, her relationship with Katie hits a slightly rough patch and she has one of the most powerful and influential dragons breathing down her neck. She must work with her friends, and those whom she does not trust, in order to defeat the next wave of terror that swoops down upon them.
…
However, I found the main strength of the book to be within the more personal moments. For example, I particularly enjoyed the exploration of Sarah's feelings and thoughts, her relationship with Katie and their friends, the addition of some potentially interesting characters (whom I don't wish to spoil), and even just the detailing of the lives of Sarah's friends. We're shown a group of people who are still nursing their wounds, physical or otherwise, and who are getting to grips with a world that's been turned upside down, but who still have their own lives to lead. With this novel, Pitts once again shows that he has a flair for blending both personal and global stories, each complimenting the other yet one thread never becomes dominating.