Three, count ‘em three reviews to mention this week! Joining Mark and I once again is the great N.E. White (aka tmso in the SFFWorld Forums. We’ve got two urban fantasies and one alternate future history…


People who have been reading my blog for a while or have come to know me through the SFFWorld Forums are likely aware that Tad Williams is one of my favorite writers of the fantastic. So it was cautious optimism that tempered my initial reaction to the news Mr. Williams was trying something new, paring down from large-scale epic to the more slim Urban Fantasy of The Bobby Dollar Novels. The Dirty Streets of Heaven is a great success: 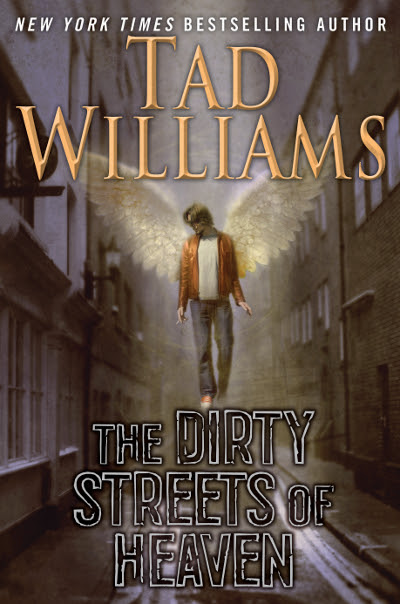 Dolorious, a.k.a. Bobby Dollar, is our first person narrator and one of many ‘Advocate’ angels who argue against the denizens of Hell for recently deceased souls. As an advocate, Bobby often appears just as people die and similar to the role a lawyer plays, he must argue for the soul’s place in Heaven. What becomes evident is how not all souls who may have seemed virtuous get immediate entrance to the pearly gates. Hell’s advocates are vicious and much like prosecutors whereas the angelic Advocates seem to be more of the defense. Shortly into the meat of the novel, a soul whose owner committed suicide vanishes as Bobby and his antagonists from Hell arrive to argue for the man’s soul. This has never happened before and sets in motion what becomes a layered and entertaining plot.

I’ve long been a fan of the of biblical themes receiving the “gritty” treatment, making Heaven and Hell much deeper than their biblical indications would lead one to believe. After all, my senior thesis in college was on such a topic. In that essay, I recall mentioning the comic book Spawn which depicted the conflict between heaven and hell in a similar light as does Tad Williams with an emerging third faction. In The Dirty Streets of Heaven, this conflict between Heaven and Hell is more of an underneath the surface thing and informs the characters and setting more so than actually being a primary plot point. In one interview with Tad Williams, the great writer Michael Moorcock came up as an influence, specifically the similarities between Moorcock’s depiction of the eternal conflict between Chaos and Order. I’d also point to Steven Brust’s To Reign in Hell which also grittifies the conflict between Heaven and Hell and even the great Tim Burton film Beetlejuice in how the afterlife is a bureaucratic extension of the real world dictated by unseen higher ups down to street walking ‘grunts’ and pencil-pushing desk jockeys.


Mark has long been a fan of David Wingrove’s Chung Kuo series and is following along with the major re-release of the series. The latest installment is The Middle Kingdom which is now book three but was originally book one:

After the setting of the scene in Son of Heaven, and the seriously violent events at the conclusion of Daylight on Iron Mountain, here’s where the story begins to move up a gear and many of the epic story’s main characters are introduced.

Beginning in 2190, the book briefly recaps on the events outlined in Daylight on Iron Mountain: the fall of the US, the nuking of Japan and the subjugation and ethnic cleansing of Africa. These events alone would make an epic story, though they are dealt with here in the matter of a few pages.

With such a list of characters it should be obvious that this is a complex and lengthy scenario where the reader is expected to be in for the long game and therefore and not everything is resolved here in The Middle Kingdom. What keeps the reader’s interest is the juxtaposition between all these disparate and often conflicting elements. The cultural values of the Han are very different to what we see in our Westernised society today, and the way that the old traditional values are combined with the new way of progress is jaw-dropping in their implementation. (Think of the film Blade Runner for such a similarly intriguing mix of Western and Eastern values.) The Han regime is harsh, from their point of view necessarily so, but the promise for the bright and glorious future makes it potentially worthwhile. Not all in positions of power see it this way, of course, and there are secret plans and counterplots a-plenty in order to both overthrow and maintain the current positions of power.

Nila reviews Whispers Underground, the third Peter Grant series by Ben Aaronovitch, an urban fantasy series that has been gaining some good buzz over the past couple of years.

The story begins with a ghost, of course. An offbeat, neighborhood kid named Abigail has found a ghost living in an old tunnel beneath her school. She decides to tell Peter, whom she knows deals with “weird magic stuff”. Together with his partner, Leslie May, whose face fell off in the first book, the three head on down to investigate. Mr. Aaronovitch sets the book’s mood with this opening scene, and while not the focus of the book, we learn a bit about the magic Peter can wield and the new, tenuous relationship he has forged with his new magic-constable partner, Leslie.

As is customary of this series, the reader is in for an educational treat on the history of one of London’s neighborhoods, and police procedurals. In this case, we get a peek into the BTP (British Transport Police) and the underground system that is vast and just might include secret tunnels and a race we’ve never seen before. Maybe.