I like to think of myself as fairly knowledgeable in the genre, I run this blog, do tons of stuff for SFFWorld, etc. Yet, some authors/books I’ve never heard of do arrive at the o’ Stuff fairly regularly, like about half of the books in this post… 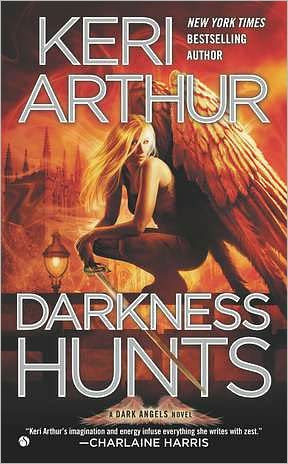 Darkness Hunts (Dark Angels #4) by Keri Arthur (Signet Select Mass Market Paperback 11/04/2012) – Fourth installment and second since Arthur switched publishers. in a paranormal series featuring a werewolf/elf who can speak with the dead and walk in the world of the living and the dead. Talk about a lady with a lot going on in her life.

Risa Jones, half-Aedh/half-werewolf, can enter the realm between life and death. She can speak to the dying and the dead, and she can see the reapers, collectors of souls. What she can not yet see is the identity of a stranger murdering women and draining their blood. Now Risa must summon her gifts to find him, even if it means putting her own life in danger. But Risa needn’t look far. The killer knows who she is.

He tells her his victims are infected by darkness and he’s fated to destroy them. Fascinated by Risa, he engages her in a sinister game: the chance to save the life of his next victim by deciphering his series of clues. In a race against time, she enlists the help of the reaper Azriel.

But as an attraction between them grows, so does the fear that the stranger’s motives are only part of a larger, more dangerous stratagem—one that that has lured Risa and Azriel into the dark. 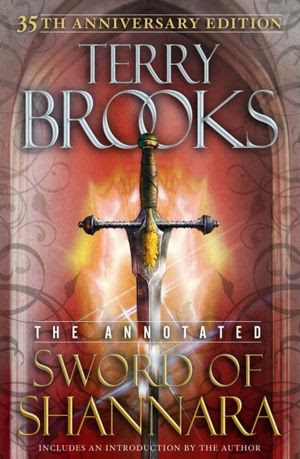 The Annotated Sword of Shannara by Terry Brooks (Del Rey Hardcover 11/13/2012) – This is the one that started it all for both Brooks and Del Rey. Say what you will but the fantasy genre might look different without this book. I read this years ago and breezed through it though I enjoyed The Scions of Shannara a whole deal more.

Thirty-five years ago, Terry Brooks brought to life a dazzling world in The Sword of Shannara. Nineteen more Shannara volumes would follow, making the series one of the most popular fantasy epics of all time. Now comes a fully annotated collector’s edition of the novel that started it all—featuring never-before-shared insights into the classic tale, an all-new introduction by the New York Times bestselling author, and replicas of the original sketches for some of the long-lost, black-and-white paintings by the Brothers Hildebrandt that decorated the original edition.

Long ago, wars ravaged the world. In peaceful Shady Vale, half-elfin Shea Ohmsford knows little of such troubles. Then the giant, forbidding Allanon reveals that the supposedly dead Warlock Lord is plotting to destroy everything in his wake. The sole weapon against this Power of Darkness is the Sword of Shannara, which can be used only by a true heir of Shannara. On Shea, last of the bloodline, rests the hope of all the races.

Soon a Skull Bearer, dread minion of a mighty evil, flies into the Vale, seeking to destroy Shea. To save his home, Shea must flee, drawing the Skull Bearer after him in menacing pursuit.

Shadow OPS: Fortress Frontier by Myke Cole (Ace, Mass Market Paperback 01/29/2013) – Easily one of my most anticipated 2013 titles since Myke’s debut Control Point is one of my top reads from 2012’s releases. I conducted an interview with Myke around the time of the release Control Point. After chatting with Myke on twitter and at a couple of geek gatherings, he’s just as cool a guy as he is a terrific writer.


The Great Reawakening did not come quietly. Across the country and in every nation, people began to develop terrifying powers—summoning storms, raising the dead, and setting everything they touch ablaze. Overnight the rules changed…but not for everyone.

Colonel Alan Bookbinder is an army bureaucrat whose worst war wound is a paper-cut. But after he develops magical powers, he is torn from everything he knows and thrown onto the front-lines.

Drafted into the Supernatural Operations Corps in a new and dangerous world, Bookbinder finds himself in command of Forward Operating Base Frontier—cut off, surrounded by monsters, and on the brink of being overrun.

Now, he must find the will to lead the people of FOB Frontier out of hell, even if the one hope of salvation lies in teaming up with the man whose own magical powers put the base in such grave danger in the first place—Oscar Britton, public enemy number one… 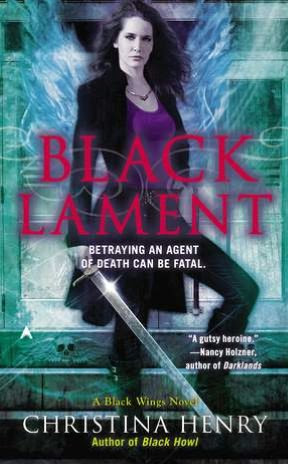 Black Lament (Black Wings #4) by Christina Henry (Ace Mass Market Paperback 11/04/2012) – This feisty femme is an Agent of death and the devil wants her baby. Fourth book in the series I didn’t even realize existed until receiving the book


As an Agent of Death, Madeline Black deals with loss every day. But when tragedy touches her own life, Maddy will have to find the strength within to carry on…

Devastated and grieving, Maddy unexpectedly finds hope with the discovery that she is pregnant. But Maddy’s joy is short lived when Lucifer informs her that he wants the baby, hoping to draw on the combined power of two of his bloodlines. Maddy is determined that her grandfather will never have her child, but she’s not sure what she can do to stop him.

Being pregnant is stressful enough, but Maddy suddenly finds herself at odds with the Agency—forbidden from meddling in the affairs of the supernatural courts. When a few of her soul collections go awry, Maddy begins to suspect that the Agency wants to terminate her employment. They should know by now that she isn’t the sort to give up without a fight…


Two years after London is struck by a devastating terrorist attack, it is cut off from the world, protected by a military force known as Choppers. The rest of Britain believes that the city is now a toxic, uninhabited wasteland.

But Jack and his friends—some of whom lost family on what has become known as Doomsday—know that the reality is very different. At great risk, they have been gathering evidence about what is really happening in London—and it is incredible.

Because the handful of London's survivors are changing. Developing strange, fantastic powers. Evolving.

Upon discovering that his mother is still alive inside London, Jack, his sister, and their three friends sneak into a city in ruins.

Vast swathes have been bombed flat. Choppers cruise the streets, looking for survivors to experiment upon. The toxic city is filled with wonders and dangers that will challenge Jack and his friends . . . and perhaps kill them. But Jack knows that the truth must be revealed to the outside world or every survivor will die. 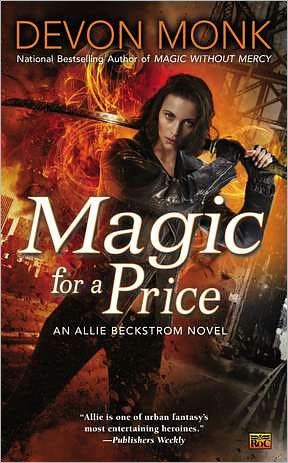 Magic For A Price (Allie Beckstrom #9) by Devon Monk (Roc Mass Market Paperback 11/04/2012) – I realize many of these Urban Fantasy authors are quick, but this is the ninth book in Monk’s series which started in 2008 with Magic to the Bone. So nine books in a series in four years, plus two books in another series? Impressive


Devon Monk is casting a spell on the fantasy world...


Using magic means it uses you back, and every spell exacts a price from its user. But some people get out of it by Offloading the cost of magic onto an innocent. Then it’s Allison Beckstrom’s job to identify the spell-caster. Allie would rather live a hand-to-mouth existence than accept the family fortune—and the strings that come with it. But when she finds a boy dying from a magical Offload that has her father’s signature all over it, Allie is thrown back into his world of black magic. And the forces she calls on in her quest for the truth will make her capable of things that some will do anything to control.... Ephraim is horrified when he comes home from school one day to find his mother unconscious at the kitchen table, clutching a bottle of pills. Even more disturbing than her suicide attempt is the reason for it: the dead boy she identified at the hospital that afternoon—a boy who looks exactly like him.

While examining his dead double’s belongings, Ephraim discovers a strange coin that makes his wishes come true each time he flips it. Before long, he’s wished his alcoholic mother into a model parent, and the girl he’s liked since second grade suddenly notices him.

But Ephraim soon realizes that the coin comes with consequences—several wishes go disastrously wrong, his best friend Nathan becomes obsessed with the coin, and the world begins to change in unexpected ways.

As Ephraim learns the coin’s secrets and how to control its power, he must find a way to keep it from Nathan and return to the world he remembers. 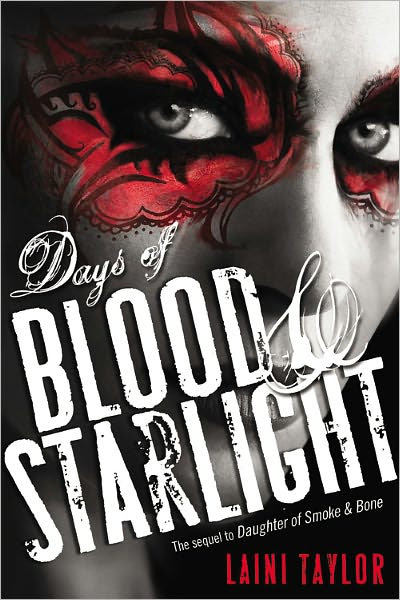 Days of Blood and Starlight (Daughter of Smoke and Bone #2) by Laini Taylor (Little, Brown Books for Young Readers Hardcover 11/06/2012) – After publishing a couple of novels about the Dreamdark fairies, Taylor’s next novel Daughter Of Smoke & Bone catapulted her in the YA fantasy world. This is the second book in the trilogy.

Art student and monster's apprentice Karou finally has the answers she has always sought. She knows who she is--and what she is. But with this knowledge comes anoher truth she would give anything to undo: She loved the enemy and he betrayed her, and a world suffered for it.

In this stunning sequel to the highly acclaimed Daughter of Smoke & Bone, Karou must decide how far she'll go to avenge her people. Filled with heartbreak and beauty, secrets and impossible choices, Days of Blood & Starlight finds Karou and Akiva on opposing sides as an age-old war stirs back to life.

While Karou and her allies build a monstrous army in a land of dust and starlight, Akiva wages a different sort of battle: a battle for redemption. For hope. But can any hope be salvaged from the ashes of their broken dream?

Daughter of Smoke and Bone was declared a "must read" by Entertainment Weekly, was named a Best Book of the Year by Amazon.com, and The New York Times called it "a breath-catching romantic fantasy."
at 10/28/2012