Just one book this week and it is an electronic ARC...no complaints because it isn't a bad thing if Mount Toberead doesn't grow for one week. 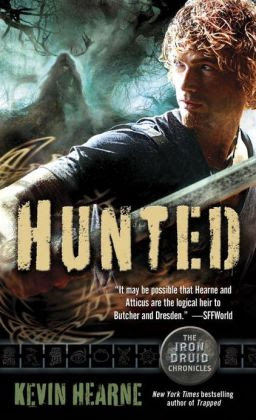 Hunted (The Iron Druid Chronicles #6) by Kevin Hearne (Del Rey, Mass Market Paperback 11/27/2012) – This is one of my more highly anticipated 2012 releases, not only because my review of Hammered is blurbed don the front, but because I also really enjoyed Hounded, loved it and posted the Hexed. I thought Tricked was good even if it felt a bit like a placeholder. I still have #5 Trapped on Mount Toberead so now seems as good a time as any to catch up with the series. That little blurb on the cover and below happens to be from one of my reviews of one of the books.


“It may be possible that Hearne and Atticus are the logical heir to Butcher and Dresden.”―SFFWorld


For a two-thousand-year-old Druid, Atticus O’Sullivan is a pretty fast runner. Good thing, because he’s being chased by not one but two goddesses of the hunt—Artemis and Diana—for messing with one of their own. Dodging their slings and arrows, Atticus, Granuaile, and his wolfhound Oberon are making a mad dash across modern-day Europe to seek help from a friend of the Tuatha Dé Danann. His usual magical option of shifting planes is blocked, so instead of playing hide-and-seek, the game plan is . . . run like hell.

Crashing the pantheon marathon is the Norse god Loki. Killing Atticus is the only loose end he needs to tie up before unleashing Ragnarok—AKA the Apocalypse. Atticus and Granuaile have to outfox the Olympians and contain the god of mischief if they want to go on living—and still have a world to live in.

Don’t miss Kevin Hearne’s novella “Two Ravens and One Crow” in the back of the book.

“An exciting mix of comedy, action, and mythology . . . [Atticus] is one of the best main characters currently present in the urban fantasy genre.”—Fantasy Book Critic, on Tricked