We've got some new reviews over at the SFFWorld Blog!  Two from Mark, one from me. I'll do this alphabetically by author last name, which leads us to Mark's review of Joyland by the great Stephen King:

By using evocative language and vivid imagery on the cover (shocked red-headed girl in a green outfit), Stephen’s made sure that readers are aware that it’s a pastiche. It’s meant to have the tone and physical properties of a cheap pulp novel from the 1950’s, although as it’s from Stephen, the style and intelligence of the plot elevate it a little from those potboilers of yesteryear.

With such elements in mind, the plot’s pretty simple. It’s a coming of age tale, a story of a young man (Devin Jones), with a broken heart, who takes on a summer vacation job in Heaven’s Bay at a rather seedy and run-down amusement park called Joyland. There’s an old tale of murder (for what old Amusement Park doesn’t have a tale of murder in its shadows?), and Devin has to deal with some hard and deep life-truths along the way. There’s also a touch of psychic prediction - “There’s a shadow over you”, the fortune teller Madame Fortuna tells Devin – which is reminiscent of other King tales, although much of the beginning of the book is Devin working through the summer, learning the carny ‘Talk’, nursing his destroyed ego and making new friends before deciding that he likes the carny life. He decides to stop on instead of going to college, which means that he stays at Joyland after the main summer season, as the park begins to wind down to season closure and refurbishment. 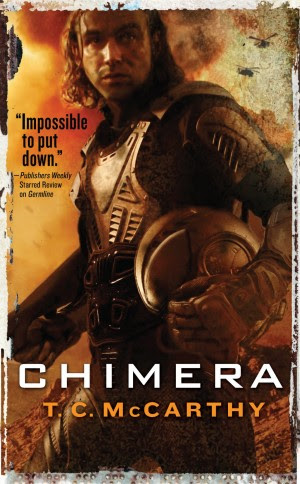 Bleak, dirty, confined, stressful, uncomfortable… these words only begin to hint at the type of story McCarthy tells in Chimera, the concluding volume of the trilogy. Keeping these rather unpleasant themes together was the compelling power of McCarthy’s narrative. In Chimera, Stan is our first person narrator and the angst he feels throughout the novel is palpable. He resents his wife, he initially blames himself for his old partner’s death, and he hates the germline soldiers (genetically engineered super soldiers) most of all. Stan immediately dislikes his new partner whom who Stan gives a racially derogatory nickname/callsign of Chong. About the only characters with which he gets along are his wife’s son (who is the result of an affair with a nameless man from the factory where the genetically engineered soldiers are created) and the artificial intelligence housed in his body armor, Kristen.

When ‘out’ of the theater of war, at home, or in civilian life, Stan, like all citizens, is constantly monitored. He is unable to have any private discussion with his estranged wife and only when he is in the deepest, least civilized sections of the jungles does Stan come close to feeling unsurveilled. This ratchets up the paranoia level and the theme of no privacy is something the great Philip K. Dick returned to often in his fiction.

Over the weekend, Mark posted his review of Seth Patrick's debut, Reviver, one of the best debuts he's read in a while:

Wow. I wasn’t expecting this one to be that good. But it draws you in from the rather visceral and very chilling first chapter. Reading like a TV series script (and admittedly, it would make a great TV series), the reader is soon getting to know Jonah, his soon-to-be-retiring boss, Sam Deering, Jonah’s reviver colleagues and his friends as he tries to uncover the big conspiracy. They develop into characters the reader is interested in and then concerned about, using the idea of ‘What-if?’ and applying it to the logical consequences within a contemporary time-frame. It’s fast, surprisingly accessible and easy to read, and was a difficult-to-put-down novel in the first thirty pages. Whilst the ideas aren’t that new, the way they’re written is engaging and exciting. Most of all, the majority of the decisions the characters make and the actions they take are sensible and logical, although it does go a little ‘action-hero’ at the end.

This one really worked for me. The set-up’s great, the characters are likeable and easily differentiated. Though we do drag in the odd cliché along the way, there’s enough new revelation as well to make the story work.