A young woman, Sarah, is waiting for a train on a train-station flat. She notices a well-dressed woman staring listlessly ahead as the new woman carefully places her briefcase on the ground and removes her shoes. When the silent woman’s face is revealed, Sarah is shocked to find her doppelgänger. Even more shocking is that this silent woman jumps in front of a train and commits suicide. Sarah eventually grabs the woman’s belongings and soon adopts the dead woman’s identity. Were the story to follow just the assumed identity scenario, it could be interesting enough. However, Orphan Black is about much more than that (cloning, secret organizations), though identity is a very big theme the series covers over the 10 well-written, greatly-acted, and smartly directed episodes of the first season.

What Sarah soon learns, in her attempt to secure a boat load of cash from her deceased look-alike in order to live with her daughter free of her sorted past, is that she is a clone. The woman’s whose identity she assumed, Beth Childs, was a police officer forcing the street punk Sarah to make a 180-degree turn from lawbreaker to law-enforcer.

Orphan Black has a lot going for it, as I intimated in my opening paragraph, but perhaps the strongest thing on this smart show is the acting of Tatiana Maslany. Over the course of the 10 episodes, Maslany seamlessly slips into 7 different roles. Subtlety is the key to her success in pulling off the roles, from the British accented Sarah; to the German-accented Katja; to the Ukraine-accented Helena; to the uptight American/Canadian accented Alison, Beth, and Cosima. In each role Maslany adopts subtle physical traits that make each character unique: with Beth, she carries herself with a bit more relaxed confidence and more like a career-woman; as Helena, she adopts a herky-jerky seemingly un-rhythmic arm and head movement, almost like a caged animal let loose; with Alison, there’s an uptight sense of bottled control in the small steps she takes as she walks and talks. 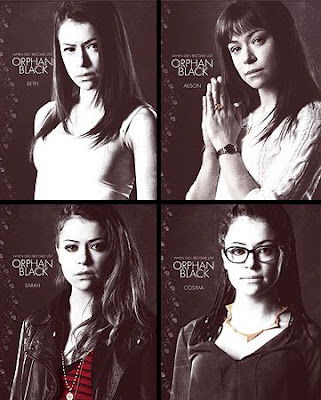 Sarah is the lead character and the character Maslany seems most comfortable playing, though perhaps the strongest role is the soccer-mom Alison and that may be perhaps because her world is shaken the most. Sarah’s always been on the run adapting to situations as they arise whereas Alison lives in a suburban community with a superficially strong marriage and two adopted children. Cosima is a scientist at heart so she is intrigued by this great experiment and search for truth. In other words, Alison lives a seemingly comfortable, happy life. Meeting her clones and becoming involved in this new world of subterfuge, being watched, and unsure of who she is drives her to breaking points she would otherwise be miles away from encountering.

While Maslany is outstanding, the supporting cast is equally impressive. As the first episode unfolds, we are introduced to characters who will comprise the primary support cast for Sarah. Felix, her flamboyant homosexual artist/prostitute foster-brother with whom Sarah lives; Mrs. S., foster-mother to both Felix and Sarah; Kira, Sarah’s daughter; Art, Beth’s partner in the police force; Paul, Beth’s live-in boyfriend whom Sarah quickly tries to convince she's actually Beth; and Vic, Sarah’s abusive, scumbag ex-boyfriend. The standout among these is Jordan Gavaris as Felix. Throughout the series, he is the person Sarah trusts the most and shares the most screen time with Maslany. The chemistry between these actors is very powerful and this can especially be seen in the scenes featuring only Felix (referred to as Fee by Sarah) and Alison. Paul is probably the character not played by Maslany who goes through the most changes, and logical, plausible changes at that.

Like the best science fiction, science is an essential element to the show but doesn’t overshadow the storytelling or characters in any way. Of course cloning is a common trope in SF, but at least in filmed SF, this might be the best and most logical treatment of the inherit problems with clones I've viewed. The clone of Cosima best exemplifies this in her quest throughout the season to learn more about the how and why of herself and her clone-sisters. She’s a university student who becomes involved with Dr. Leekie, one of the leading geneticist in the world. I’m not well-versed enough in the science the show makes so integral to the plot, but it comes across as plausible and well-reasoned. Related to that, the nature/nature argument does arise. We see Alison (prior to learning of her clone nature, becoming “self-aware”) as a normal, well-adjusted person. On the other hand, Sarah and especially Helena are far from well-adjusted functioning members of society. The show doesn’t explicitly say this is what happens when one is brought up in a well-adjusted home (Alison, Cosima because we don’t know much about their past), but the implications to ponder such questions are present. Great SF (and science for that matter) doesn’t always offer the answers, but gives people questions to consider.

Much of SF is male-centric, not so with Orphan Black. Each of the women Maslany portrays has a sense of power over herself, despite being manipulated from outside forces. Sarah and Alison have motherly instincts to protect the family they have, Sarah a drive for independence and making herself better; Cosima is a brilliant student-scientist; Beth was a successful police officer. These roles and their ‘base of power’ as characters does not come as reflection of the men in their lives. Perhaps the most domineering character outside of the clones is Mrs. S., Sarah and Felix’s foster mother. Partially due to Kira, Sarah’s daughter, being taken in by Mrs. S., does Sarah’s foster mother hold so much power. But as we learn more about Mrs. S., she becomes a greater presence in Sarah’s life as source of support and more.


The show takes place primarily in a large North American city and a little searching on the internet places the show in Toronto. The characters barely refer to the city name and the only location blatantly identified is the UK from whence Mrs. S., Felix and Sarah escaped.  Filming in Canada is said to be cheaper than filming in the States and I also think by keeping the Large City a bit generic (rather than not stating it is in Chicago, Los Angeles, or New York), it places the idea in the viewers mind that the story can take place in any large city.

BBC America is building a nice base for itself here in the United States of a variety of programs. Of course Doctor Who is their big SF franchise, but with shows like Copper, imports like Luther among others, the network is turning to a very dependable outlet for scripted dramatic television. Because of its low profile (it isn’t AMC, HBO or Showtime), chances may be slim for Tatiana Maslany to receive the great recognition she deserves for the great acting she’s done on the show. Most folks, including myself, who have watched and enjoyed the show (TV critic Alan Sepinwall, Comedian Patton Oswalt) think Maslany should at the very least receive Emmy and/or Golden Globe nominations for her acting. The show pushes the limits of what has been depicted on cable-network television, from the level of violence depicted to how graphic the sex scenes are to the willingness of the writers to simply not hold back in their story. In other words, Orphan Black likely would not have been able to be on networks like USA or even SyFy.

My wife, who tolerates much of the SF I consume took to this show very quickly, it was a show we both enjoyed. Me with my SFF obsessions and her with enjoying simply a good story.

Orphan Black will be available on Blu-Ray and DVD July 16 and is likely available through On Demand on local cable providers.

At the Comic-Con panel for BBC America's cult favorite sci-fi series, co-creator John Fawcett revealed that the clones club is expanding. "I'm not surprised if we unveiled a few more clones in orphan black season 2 dvd box set ," he said to the audience's very vocal approval. "I don't think that's letting the cat out of the bag.""House of Cards season 1 dvd box set debuted Friday as an object of intense fascination. Anticipation has been high, not just for its steamy look at Beltway politics or the A-list cast the boasts Kevin Spacey, but because of its decision to launch on Netflix's streaming service instead of a pedigreed cable network like HBO -- and to launch the entire 13-episode season in one binge-worthy gulp.