Here's the small haul for this week at the 'o Stuff. I've given up trying to predict which books I'll read of those that arrived, but I have enjoyed books by two of authors in today's post.


Set in an alternate version of early 1900s England, Copperhead is the sequel to Tina Connolly's stunning historical fantasy debut.

Helen Huntingdon is beautiful—so beautiful she has to wear an iron mask.

Six months ago her sister Jane uncovered a fey plot to take over the city. Too late for Helen, who opted for fey beauty in her face—and now has to cover her face with iron so she won’t be taken over, her personality erased by the bodiless fey.

Not that Helen would mind that some days. Stuck in a marriage with the wealthy and controlling Alistair, she lives at the edges of her life, secretly helping Jane remove the dangerous fey beauty from the wealthy society women who paid for it. But when the chancy procedure turns deadly, Jane goes missing—and is implicated in a murder.

Meanwhile, Alistair’s influential clique Copperhead—whose emblem is the poisonous copperhead hydra—is out to restore humans to their “rightful” place, even to the point of destroying the dwarvven who have always been allies.

Helen is determined to find her missing sister, as well as continue the good fight against the fey. But when that pits her against her own husband—and when she meets an enigmatic young revolutionary—she’s pushed to discover how far she’ll bend society’s rules to do what’s right. It may be more than her beauty at stake. It may be her honor...and her heart.

In 1986 K. W. Jeter coined the term "steampunk," applying it to his first Victorian-era science fiction alternate-history adventure. At last he has returned with Fiendish Schemes, a tale of George Dower, son of the inventor of Infernal Devices, who has been in new self-imposed exile…accumulating debts.

The world Dower left when he went into hiding was significantly simpler than the new, steam-powered Victorian London, a mad whirl of civilization filled with gadgets and gears in the least expected places. After accepting congratulations for his late father's grandest invention—a walking, steam-powered lighthouse—Dower is enticed by the prospect of financial gain into a web of intrigue with ominously mysterious players who have nefarious plans of which he can only guess.

If he can locate and make his father’s Vox Universalis work as it was intended, his future, he is promised, is assured. But his efforts are confounded by the strange Vicar Stonebrake, who promises him aid, but is more interested in converting sentient whales to Christianity—and making money—than in helping George. Drugged, arrested, and interrogated by men, women, and the steam-powered Prime Minister, Dower is trapped in a maelstrom of secrets, corruption, and schemes that threaten to drown him in the chaos of this mad new world. Stalking the Beast (A Pathfinder Tales novel) by Howard Andrew Jones (Paizo Mass Market Paperback 10/22/2013) – This is Jones’s second Pathfinder novel and I loved his second installment of The Chronicles of Sword and Sand so I’ll be reading this one.

When a mysterious monster carves a path of destruction across the southern River Kingdoms, desperate townsfolk look to the famed elven ranger Elyana and her half-orc companion Drelm for salvation. For Drelm, however, the mission is about more than simple justice, as without a great victory proving his worth, a prejudiced populace will never allow him to marry the human woman he loves. Together with a fresh band of allies, including the mysterious gunslinger Lisette, the heroes must set off into the wilderness, hunting a terrifying beast that will test their abilities—and their friendships—to the breaking point and beyond.

From acclaimed author Howard Andrew Jones comes a new adventure of love, death, and unnatural creatures, set in the award-winning world of the Pathfinder Roleplaying Game. 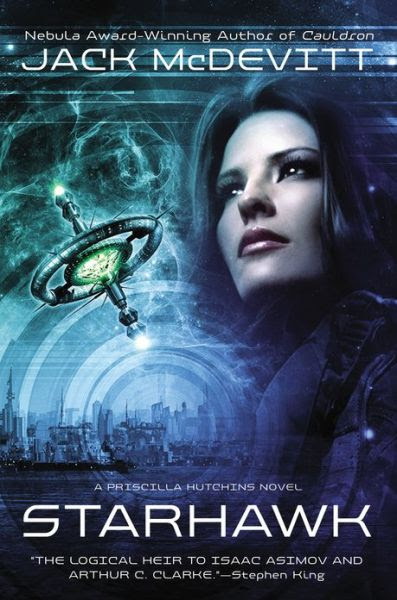 Starhawk by Jack McDevitt (Ace, Hardcover 11/05/2012) – I’ve read a handful of novels from McDevitt and enjoyed most of them. This is a prequel to the series featuring the character who first appeared in The Engines of God

Priscilla Hutchins has been through many experiences. This is the story of her first unforgettable adventure…

Her timing is far from optimal, however. Faster-than-light travel has only recently become a reality, and the World Space Authority is still learning how to manage long-range missions safely. To make matters worse, efforts to prepare two planets for colonization are killing off native life-forms, outraging people on Earth.

So there's not a lot of demand for space pilots. Priscilla thinks her career may be over before it has begun. But her ambition won't be denied, and soon she is on the bridge of an interstellar ship, working for the corporation that is responsible for the terraforming.

Her working conditions include bomb threats, sabotage, clashes with her employers—and a mission to a world, adrift between the stars, that harbors a life-form unlike anything humanity has ever seen. Ultimately, she will be part of a life-and-death struggle that will test both her capabilities and her character…
at 10/20/2013