It has been quite a while since I did a round up of my reviews and columns, s, here goes...

Earlier this week, the latest installment of my column at SF Signal, The Completest was posted. This time 'round, I feature a decade-plus old trilogy by a writer whose work I've come to enjoy with every new book. The column covers John Marco's Tyrants and Kings trilogy.

My latest Tor.com review was posted earlier this week, The Abominable by Dan Simmons. I've read a handful of novels by Simmons and enjoyed most of them quite a bit.  Unfortunately, the same can't be said for The Abominable:

Simmons uses a clever framing device in the novel, inserting himself into the narrative. The first chapter, which at first seems like a typical author’s introduction, turns out to be a recounting of a fictitious meeting between Simmons and the protagonist of the main novel, Jacob Perry, a veteran mountain climber who once attempted to climb Mount Everest. The character Dan Simmons secures a meeting with Perry to initially discuss Perry’s experience in an expedition in Antarctica for a novel he plans on writing. In what is just the first of many a misdirection in the novel, Perry’s experience on Mount Everest turns out to be the story Simmons reveals rather than anything involving an Antarctic expedition.
...
The details and minutiae of mountaineering comprises a great deal of the narrative, to the point where I felt it bogged down what was I thought was supposed to be a novel with the feel of a thriller. The scenes involving Perry’s party first meeting Sigl in a German bar were some of the strongest and most tense in the novel. Here, the character development Simmons put into this novel, coupled with a historically familiar setting gave The Abominable a feel of authenticity.

A few weeks ago, I read The Republic of Thieves by Scott Lynch, which published on October 8.  I liked it with some minor reservations. 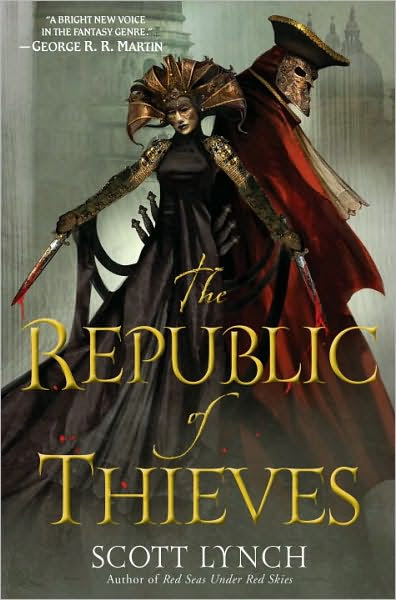 The main storyline involves Locke’s recovery from a severe poisoning, through the help of the powerful Bondsmagi (sort of like demi-god wizards) named Patience. The price of that cleansing is maneuvering the Local elections to produce an outcome that is beneficial to one of two factions of the Bondsmagi. Locke’s opponent is his lost love Sabetha, who Locke hasn’t seen in years. So on one side, you’ve got Locke and Jean Tannen, and on the other Sabetha. Part of what makes this such an enthralling enterprise for Locke (and the reader) is the long-awaiting (awaited) chance to see Sabetha. Before they actually see each other; however, their cons begin and as the story progresses, Lynch builds a great deal of tension – dramatic, sexual, and altogether addictively frustrating – between the two former lovers and partners. They’ve been instructed by their Bondsmagi masters to not team up with each other against the Bondsmagi, but that doesn’t stop them from meeting with one another on several occasions. These meetings between Sabetha and Locke are fraught with a tense thin line between Sabetha and Locke that divides the truth from both characters from trying to con each other. In point of fact, the election could have easily been called the Macguffin election since it serves more of a thing to get Sabetha and Locke (and Jean to a lesser extent) reunited and shine as characters rather than having an immediate effect on their world.

Most recently, I reviewed the first installment of L.E. Modesitt's popular and long-running fantasy saga, The Magic of Recluce. Despite receiving many, many of Modesitt's books review, this was the first one by him I decided to read. I enjoyed this one quite a bit and think I may have found another massive fantasy series I'll be following.

Lerris is a bored young man, he tells us this with regularity through the first person narration Modesitt employs for a great majority of the novel. People like Lerris who don’t fit within the Brotherhood’s strictly governed land of Recluce, are given two choices – partake in the dangergeld, a journey people of this world go through in order to find their purpose or be exiled. Lerris’ parents send him to apprentice under his woodworker Uncle, which they think will give him the discipline he requires when he partakes in the ritualistic dangergeld. While he becomes good at woodworking, he of course becomes bored with it, despite the familial ties. When he readies to leave, his uncle Sardit gifts him an incredibly beautiful wrought staff of black wood, bound at the ends in metal
...
Modesitt has been writing for more than thirty years and at the time The Magic of Recluce was published, he’d been writing and publishing science fiction for nearly twenty years; it was his first fantasy novel. While the framework of The Magic of Recluce is classic in nature, he brings in enough of a unique take to make the novel an extremely enjoyable read. Initially, Lerris was not the most…pleasant of characters. His continual boredom and interactions with other characters made him come across as somewhat caustic. Not exactly the preferred qualities of a protagonist, especially when that protagonist is telling the story as the first person narrator. What made Lerris’s journey believable was Modesitt’s ability to not just make the hero bearable in the fantastical situation, but to slowly turn him into an admirable mature man.
at 10/25/2013

The Magic of Recluce was a great book, but I've never really continued with the series. Definitely on my catch-up list, though.