Normally, the postings you’ll read here at the ‘o Stuff revolve around books, movies, and TV shows. This one is slightly different. As some folks who follow me on twitter and facebook may be aware, I’ve been doing a lot of running over the past few years. Most recently, I’ve been training for a half-marathon. Well, yesterday, I completed my first half-marathon: the Shades of Death half-marathon in Allamuchy, New Jersey. (Shades of Death Road is one of haunted American roads, covered in Weird NJ) 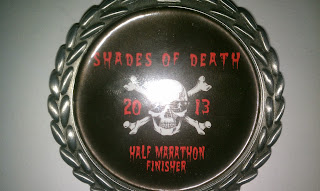 I began running about four years ago after years of scoffing at it for many years. I would see people running in my neighborhood or on the treadmill at the gym and not get it. My quip was always if I need to get there faster than walking I’ll get in my car. Then one day, I decided to get on the treadmill after a weight training session and pushed through a mile. I realized I wanted to push more and pushed myself to four miles on a treadmill before taking my running outside and cancelling my gym membership. Over the past few years, I’ve gone from averaging 9-12 miles per week (about 3 miles per run), to 15-20 miles per week (between 4 and 8 miles per run) and participating in various 5K charity runs (the best and most organized of which is the annual Thanksgiving Turkey Trot in Flemington, NJ which has upwards of 7,000 participants), Warrior Dashes, and larger runs.

What I once scoffed at has become a very big part of my life. Now that I've been running for about four years, if I don't get out and run at least three days a week, I feel as if I've failed a bit. You might say, this has become a bit of an addiction. In case the picture below isn't evidence, I'm what in runner's parlance as a Clydesdale. 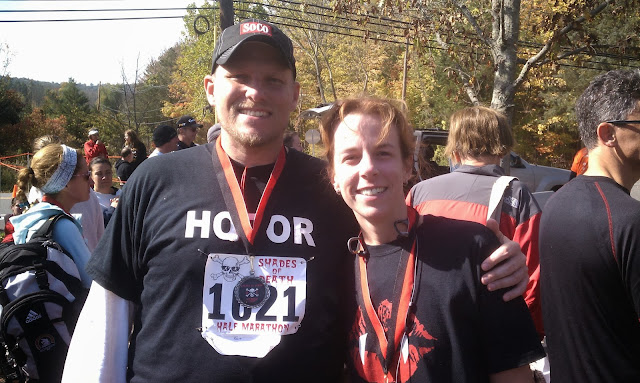 My wife started running about a year after I did, but caught up quickly with (and surpassed) me because she had been doing P90X for a few years so she had the cardio aspect beat. She actually competed in a half marathon in the spring of this year (Rutgers Unite Half-Marathon) so Shades of Death was her second while it was my first. I've already signed up for the 2014 Rutgers Unite Half-Marathon.  I was extremely proud of her for kicking ass in April and completing the half-marathon and I realized I needed to catch up with her so we both signed up for the Shades of Death and recently for the Rutgers Half-Marathon  While my pace is faster than hers (I have much longer legs after all), she'll always have that first half-marathon ahead of me and helps to push me.

So, I was pretty happy with this half-marathon. A relatively flat course (aside from the hills at the beginning which we ran up twice since we looped the course twice for the 13.33 miles) which was a lot like running in my neighborhood since it was all farmland. I managed a pace of exactly 10 minutes/per mile, which is about where I should be.