So...New York Comic-Con...this year was the second year I attended and this time, I was able to get in with a Press Pass thanks to the writing I do for SFFWorld and now Tor.com and SF Signal. Also, thanks to Myke Cole for suggesting I try to get a Press Pass.

Last year, I attended on Saturday with my wife but this year, I flew solo on Friday thinking (and hearing from other folks) that Friday is typically not as crowded as Saturday.  Not so much, if anything, Friday this year was as packed as Saturday was last year.

As I was getting closer to the Javits Center (which, every time I go there, amazes me with how big it is), I chatted with a Dalek.  Rather, we exchanged shouts of "Exterminate!" at each other.

The first thing I did was head over to the The Wheel of Time Turns and Epic Fantasy Remains Epic! panel in the basement at the back back back of the convention.I've read three of the five authors (Sullivan, Lynch, & Bear) on the panel and may try the other two in the near future. Brian Staveley in particular impressed me with how comfortable he came across.  It was a fun panel and the authors seemed to get along nicely. Of course, it helps when two of them are partners, Bear and Lynch. The panel was moderated by Maryelizabeth Hart of Mysterious Galaxy books and she did a fine job.

At the conclusion of the panel, I had a chance to chat a bit with Irene Gallo whom everybody reading this likely knows is the art director for Tor (as such, she's responsible for the gorgeous design on Brian's debut novel The Emperor's Blades) and one of my bosses at Tor.com. We chatted a bit about Breaking Bad (happened to be wearing my Breaking Bad/Game of Thrones mash-up T-Shirt) and I had to make sure I told Irene how great the post she did at Tor.com featuring the printing process of A Memory of Light was.

I swaggered over to the autographing to get my books signed by Michael (Theft of Swords), Scott (The Lies of Locke Lamora 1st US HC), and Elizabeth (Range of Ghosts).  I bumped into Mike Underwood (author of Geekomancy and Angry Robots Marketing) on line and chatted with him a bit and realized I need to read his books. From there, I entered the chaos that is the main floor of the Javits Center during New York Comic-Con.

To be honest, I was wandering around like a cross between a zombie and a kid at the annual carnival trying to get to everything I wanted to see. Friends of the family own a comic shop (JC Comics) so I wanted to make sure to visit them. Their double booth in the comic retailer area was swamped with customers rifling through the back-issue bins and buying comics. 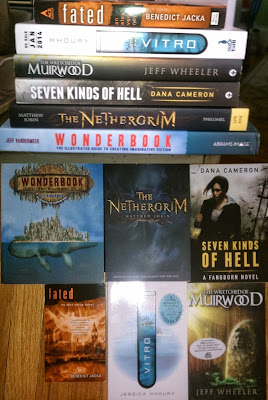 Strolling through the aisles, I stopped over at the Orbit Books booth, chatted with them a bit and had to admit that I was one of the few who didn't like a certain book they published and is getting rave reviews but that I was immensely enjoying Fortune's Pawn by Rachel Bach (aka Rachel Aaron).

At the Penguin Booth (ACE, ROC, DAW, RazorBill and other YA imprints) SFF Marketing guru and all-around awesome person Colleen Lindsay was running a tight ship, but a fun ship as she was keeping folks in line for book signings with a bull-horn.  I grabbed a few freebies from them, including a book I've been curious about - Fated by Benedict Jacka as well as The Nethergrim by Matthew Tobin (a YA fantasy publishing in April 2014) and Vitro from Jessica Khoury (a near future YA SF publishing in January 2014).

I stopped by the 47North booth and was offered copies of The Wretched of Muirwood by Jeff Wheeler and Seven Kinds of Hell by Dana Cameron.

Wandering the aisles I arrived at the booth for Abrams Books, who publishes lovely retrospective and coffee-table type books. I had to buy Jeff Vandermeer's Wonderbook, which is signed so I had no problems slapping down some cash for what is an amazingly gorgeous book. The DelRey/Spectra booth was very nice, and was packed for both the Jason M. Hough signing and the Scott Lynch signing. 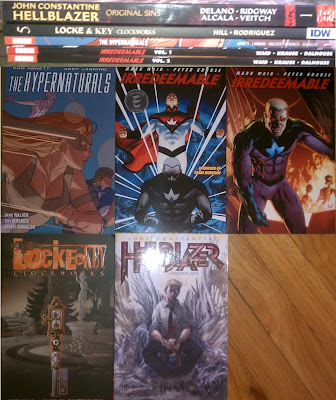 I wasn't walking out of the Javits Center without at least a few comics.  I needed volume five of Joe Hill/Gabriel Rodriguez's Locke & Key so I picked that up.  What I found surprising is that some of the comic publishers exhibiting weren't offering discounts on their books and merchandise (especially when the booth across from it, Midtown Comics, was offering a blanket 20% everything). Typically at these things, a discount of at least 10-20% is an across the board thing. Image was knocking off prices on some of their larger graphic novels and I was able to get a deal for 3 trades at the BOOM! booth, but Dark Horse wasn't offering anything. I would have picked up a couple of things if they were.  Based on a recommendation from Jeff Patterson on the SF Signal podcast (or maybe it was his new Three Hoarsmen with Fred Kiesche and John Stevens), I picked up The Hypernaturals by Dan Abnett & Andy Lanning.  I'd been wanting to pick up/read Irredeemable by Mark Waid and Peter Krause for a while, so I picked up those two (and The Hypernaturals) at the BOOM! booth.  Lots of dealers were offering 50% of trade paperbacks and/or trades for a flat $10, so I picked up (after years of knowing I should be reading it) the first Hellblazer collection.

I made some more acquaintances at the Tor booth after informing them I wrote for Tor.com, in particular Marco Palmieri (I think) who was sporting an Orphan Black t-shirt so we both gushed about the show since I write about it.  Brian Staveley had a signing at 5PM (or was it 6PM?) and I was initially planning on sticking around for it, but between the crowds, my growing sense of claustrophobia, being on my feet all day, and wanting to make sure I got on a train to NJ that got me home in a timely fashion, I left at about 4:30. Regardless, hearing Brian on the panel (coupled with my SFFWorld colleague Nila's review of the book) convinced me to read The Emperor's Blades when it publishes.

I was really hoping RED BUBBLE would have a booth again this year, but sadly, they did not make it to the show so I didn't walk out with any new T-shirts for myself. However, I did pick up a "Coulson Lives" shirt for my wife who liked Coulson in the past Marvel movies, but has a full on crush thanks to Agents of S.H.I.E.L.D. 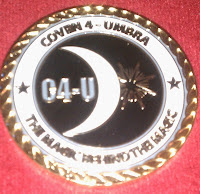 As I was losing steam, I made one last pass through the aisle where the Del Rey booth was located and ran into of Myke Cole who gave me a Challenge Coin (probably the best thing I snagged at the con).  In tow was Peter V. Brett and his girlfriend Laura who was wearing a cool dress that looked to be comprised of panels from Marvel Comics.

The con seemed to run smoothly from my perspective, even if it was extremely crowded. As I get older, I'm liking crowds less and less. The only real gripe I have is with some of the folks who dress up. Rather, I have no problem with the cosplayers, on the whole because it is cool to see how inventive and accurate some of the people's costumes can be.  The issue is when somebody decides to dress up like a 10 foot tall robot and an entire crowded aisle needs to make a path for him. Or the people who hold up the foot traffic taking pictures of folks in a Deadpool costume having a sword fight with Link from Legend of Zelda.