In Trading in Danger, Elizabeth Moon introduces readers to Kylar “Ky” Vatta as she’s being discharged from the military. Ky, fortunately, is a member of the Vatta family, owners of Vatta Transport Ltd a powerful space trading corporation based on the rich planet Slotter, so she can fall back on her family’s company as a means to an end. However, her heart was in the military and in the first chapter, Moon’s depiction of the Ky’s discharge is one of the strongest novel openings which immediately generates empathy and sympathy for the protagonist. It may seem a simple thing and with little introduction to or knowledge of Ky, but a great sense of emotional turmoil and shock is conveyed through what Ky experiences and how she deals with it through her internal dialogue. I immediately began rooting for Ky to succeed and felt that way over the course of the novel. I think I like the character of Ky Vatta even more than Moon's more famous character Paks. 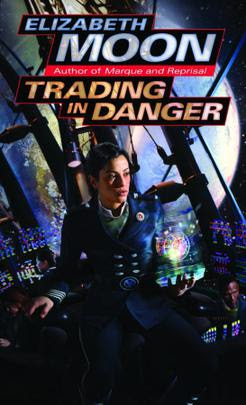 Throughout the remainder of the novel, Ky’s plight does not get any easier. She is given a derelict of a ship Glennys Jones to run one last job/mission, which of course does not turn into “one last job.” Along the way of this last job, Ky takes on another job in her name, rather than in the name of her father’s company. Ky wants to branch out on her own, make a name for herself. When her father, Gerard, set her on the task of “one last job” for the ship, he suspected she might get herself some more contracts and go a little rogue. What he, nor Ky, expected was that the major communication ansible at the spaceport would be destroyed, one of those jobs she takes would lead to a contract with a Mercenary crew – the Mackensee Military Assistance Corporation – and that job would involve holding on to some passengers for a time. What everybody involved didn’t expect was that some of those passengers would be pirates who are connected with messing with the ansibles, attempt mutiny on Ky’s ship. Fortunately, Ky’s military training kicks in which allows her to handle the situation amazingly well.

I am a fan of Elizabeth Moon’s writing, although I’ve only read her fantasy output. Not surprisingly, her storytelling, writing and hand at character just as strong when she shifts to Science Fiction. Like her fantasy, there’s a strong military flavor to the novel which, considering her experience as a Marine, is only natural. In that sense, the novel feels quite natural and plausible. Overall, I enjoyed the novel a great deal and plan on reading through the remaining books in the series sooner rather than late, which I define as ‘within the next year.’

There came a point near the end of the novel when one of the characters – a mentor character by the name of Quincy Robin – was giving Ky some advice. Good advice from a place of love and respect. It was a great scene, and I came to a realization. This character was/is a woman whose first name is Quincy and often is referred to by that first name. From my experience, and this is probably flavored by the television show Quincy starring Jack Klugman, I was both reading this character as a man and a woman. Maybe a better way to say that is with gender blinders? All I know is that I wasn’t placing a value on the character because of her gender. Multiple times in the narrative, Moon refers to Quincy as “she” or “her” but my preconceived notion of the character as a man because of the name was in conflict with that. I wasn’t placing a value judgment on the character of Quincy or her gender, but it was a conflict (of sorts) in my own head. As a result, I realized the gender of the character didn’t factor negatively or positively into my respect and admiration of the character, Quincy was simply a well-wrought character who happened to be a woman.

This “gender blindness” or “zero value gender judgment” came at a time when I’d read a few novels in a row by women and just prior to Trading in Danger, I read (and enjoyed) Ascension by Jacqueline Koyanagi. Both novels feature women protagonists in novels most often associated with male writers which would most often feature male protagonists. With both of these novels and the protagonists, I felt a connection to their plight, felt invested in their emotions and rooted for them to succeed.


I’d like to think I’ve always read gender in characters this way, not as a value in a positive or negative, but as an element of the character. There’s ever more talk, at least in the twitter circles that I follow, about gender in genre. So this is just my little two cents on the subject. At least for now.
at 2/04/2014

Email ThisBlogThis!Share to TwitterShare to FacebookShare to Pinterest
Labels: Catching up with the Classics, Del Rey, Elizabeth Moon, Vatta's War

I think I Had jumped to the wrong island of conclusions that Quincy was a man, based on the name, too.

Gender Blinders can only be countered when we recognize them

I'm wondering if Mrs. Moon intended the confusion for Quincy.

Part of what I was getting at was whether or not Gender Blinders are a good thing? That is, not allowing gender to be the sole (or primary) factor of whether or not the reader accepts the character.