Here's the weekly post where I mention the review books which arrived either on my kindle or in my mailbox/in front of my garage/on my porch. Devi Morris has a lot of problems, and not the fun, easy-to-shoot kind either. After a mysterious attack left her short several memories and one partner, she'd determined to keep her head down, do her job, and get on with her life. But even though Devi's not actually looking for it this time, trouble keeps finding her. She sees ghostly creatures no one else can, the inexplicable black stain on her hands keeps getting bigger, and she can't seem to stop getting into compromising situations with a man she's supposed to hate. But when a deadly crisis exposes far more of the truth than she bargained for, Devi discovers there's worse fates than being shot, and sometimes the only people you can trust are the ones who want you dead. 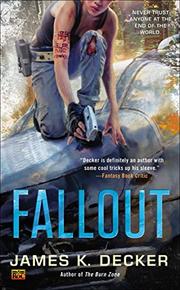 Overpopulation, disease, and ecological disaster were edging humanity toward extinction. Hope arrived in the haan, an alien race that promised us a future.

And what they wanted in exchange seemed so harmless...

Sam Shao has found out too much about the haan, by accident. All humans have to get along with them—we owe them our lives—and Sam even counts a haan among her best friends. But the more she learns, the less she trusts them

It doesn’t help that the building of new haan colonies seems to be coinciding with a rash of missing persons cases. Sam and her hacker friends are determined to reveal the truth about the haan, before it’s too late. The aliens are still promising salvation, and they seem set to deliver, but with things already spinning out of control Sam is confronted with a possibility no one wants to admit—that what salvation means to humankind and what it means to the haan may be two horribly different things. 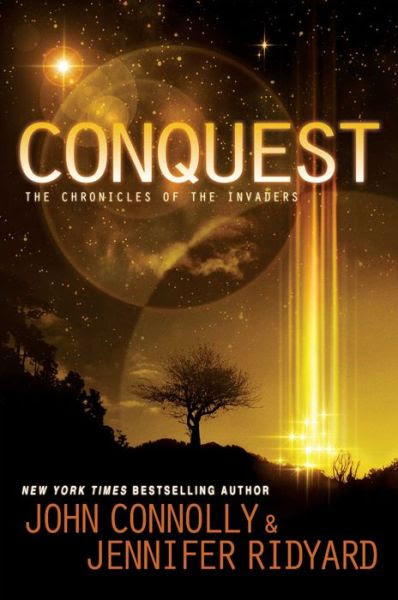 Conquest (Book One of The Chronicles of the Invaders) by John Connolly and Jennifer Ridyard (Emily Beslter Books / Simon & Schuster Hardcover 02/11/2014) – First in a series for “teen readers” from one experienced/published author teaming with a journalist on her first novel. Connolly is the experienced one here and has many international bestsellers to his credit. This seems a typical alien invasion/takeover story, but sounds intriguing nonetheless.

It is ruled by the Illyri, a beautiful, civilized, yet ruthless alien species. But humankind has not given up the fight, and Paul Kerr is one of a new generation of young Resistance leaders waging war on the invaders.

Syl Hellais is the first of the Illyri to be born on Earth. Trapped inside the walls of her father’s stronghold, hated by the humans, she longs to escape.

But on her sixteenth birthday, Syl’s life is about to change forever. She will become an outcast, an enemy of her people, for daring to save the life of one human: Paul Kerr. Only together do they have a chance of saving each other, and the planet they both call home.

For there is a greater darkness behind the Illyri conquest of Earth, and the real invasion has not yet even begun. . . 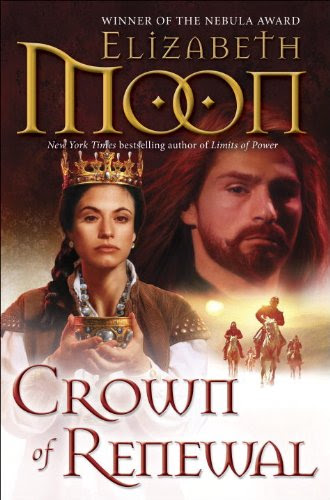 Crown of Renewal (Book Five of Paladin’s Legacy) by Elizabeth Moon (Del Rey Hardcover 05/24/2014) – I liked the first two in this series (Oath of Fealty and Kings of the North) and the first trilogy set in this world, The Deed of Paksenarrion has a special spot on in my Omnibus Hall of Fame [© PeterWilliam]. However, I sort of fell behind on this series and need to readt, Echoes of Betrayal and Limits of Power before reading this one. I’ve got a few months so I should be able to manage…unlessof course her Vatta’s War five book set, which I’ve just begun with Trading and Danger grabs me too strongly.

The mysterious reappearance of magery throughout the land has been met with suspicion, fear, and violence. In the kingdom of Lyonya, Kieri, the half-elven, half-human king, struggles to balance the competing demands of his heritage while fighting a deadly threat to his rule: evil elves linked in some way to the rebirth of magic.

Meanwhile, in the neighboring kingdom of Tsaia, a set of ancient artifacts recovered by the former mercenary Dorrin Verrakai may hold the answer to the riddle of magery’s return. Thus Dorrin embarks on a dangerous quest to return these relics of a bygone age to their all-but-mythical place of origin. What she encounters there will change her in unimaginable ways—and spell doom or salvation for the entire world.

What Makes This Book So Great by Jo Walton (Tor, Hardcover 01/21/201) – This book contains selected Tor.com posts from Jo Walton between 2008 (when she began writing for Tor.com) and 2011. I’ve been reading her columns since she started and she always has interesting things to say about the books which are the subject of her posts. Essentially, this book is one giant recommendation list. In other words, I’m very pleased to have a copy. My pal Hobbit reviewed the UK version

As any reader of Jo Walton's Among Others might guess, Walton is both an inveterate reader of SF and fantasy, and a chronic re-reader of books. In 2008, then-new science-fiction mega-site Tor.com asked Walton to blog regularly about her re-reading—about all kinds of older fantasy and SF, ranging from acknowledged classics, to guilty pleasures, to forgotten oddities and gems. These posts have consistently been among the most popular features of Tor.com. Now this volumes presents a selection of the best of them, ranging from short essays to long reassessments of some of the field's most ambitious series.

Among Walton's many subjects here are the Zones of Thought novels of Vernor Vinge; the question of what genre readers mean by "mainstream"; the underappreciated SF adventures of C. J. Cherryh; the field's many approaches to time travel; the masterful science fiction of Samuel R. Delany; Salman Rushdie's Midnight's Children; the early Hainish novels of Ursula K. Le Guin; and a Robert A. Heinlein novel you have most certainly never read.

Over 130 essays in all, What Makes This Book So Great is an immensely readable, engaging collection of provocative, opinionated thoughts about past and present-day fantasy and science fiction, from one of our best writers. The Dagger of Trust (A Pathfinder Tales novel) by Chris Willrich (Paizo Mass Market Paperback 02/11/2014) – This is Willrich’s first Pathfinder novel after publishing a well-received novel with Pyr - The Scroll of Years.

Gideon Gull leads a double life: one as a talented young bard at the Rhapsodic College, the other as a student of the Shadow School, where Taldor's infamous Lion Blades are trained to be master spies and assassins. When a magical fog starts turning ordinary people into murderous mobs along the border between Taldor and Gideon's home nation of Andoran, it's up to him and a crew of daring performers to solve the mystery before both nations fall to madness and slaughter. But how do you fight an enemy that turns innocent people into weapons? From critically acclaimed author Chris Willrich comes a bold new adventure of intrigue, espionage, and arcane mystery, set in the award-winning world of the Pathfinder Roleplaying Game.

I'll be picking up Fallout this week.

Really looking forward to Honor's Knight. Fortune's Pawn was so much fun.

Enjoyed being on the podcast with you the other night.