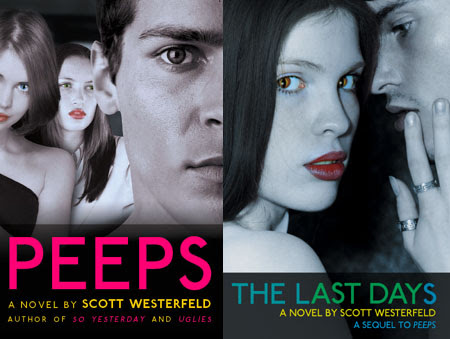 Vampires, we all know them and at one point they were supposed to be scary creatures that could take over your soul, drink your blood and destroy you. Well, over the years to say the vampire has lost some of its scary edge is an understatement. While Dracula did have some sexiness to him, the modern perception of the vampire is less scary and more sexy. Enter Scott Westerfeld and his two book series which includes Peeps and The Last Days. These books tell the story of a world on the brink of apocalypse, overrun by vampires, but not your average vampires and are rarely referred to as such. Rather, they are “peeps” as the title indicates, peep being a shortening of the term parasite positive. You see, in Westerfeld’s tale, parasites cause the stricken person to shun both the light and that which he or she loved in their previous life. Throughout the first novel Peeps, Westerfeld injects a logical scientific explanation for many of the tropes of the vampire legend. By doing this, Westerfeld allows the novel to be read on many levels: a vampire novel, a young adult novel [which it is marketed as], a horror novel (mashed up with science fiction), or a dark fantasy novel.

Also, my role at SF Signal has grown in the past few weeks. In addition to the occasional book review, I am now one of the Mind Meld curators for the SF Signal overlords John DeNardo and JP Frantz.  As such, my first Mind Meld posted yesterday and asked the question: