Howdy folks!  I've had a couple of things post this week; one at SF Signal and the other a review at good old SFFWorld.  Since the book review posted first, we'll go with that one, OK?

Eric Brown, for lack of a better term, is one of those mid-list Science Fiction authors who help to keep the genre on a solid foundation.  I feel that term is a slight to Brown because IMHO (and the opinion of my SFFWorld colleague Mark Chitty) because Eric Brown is an author who deserves more attention and a wider audience. I think his UK audience is fairly substantial, which makes sense because after all, he is from the UK.  I've read a handful of his books and enjoyed all of them, including Helix Wars, the review for which I posted to SFFWorld earlier this week. 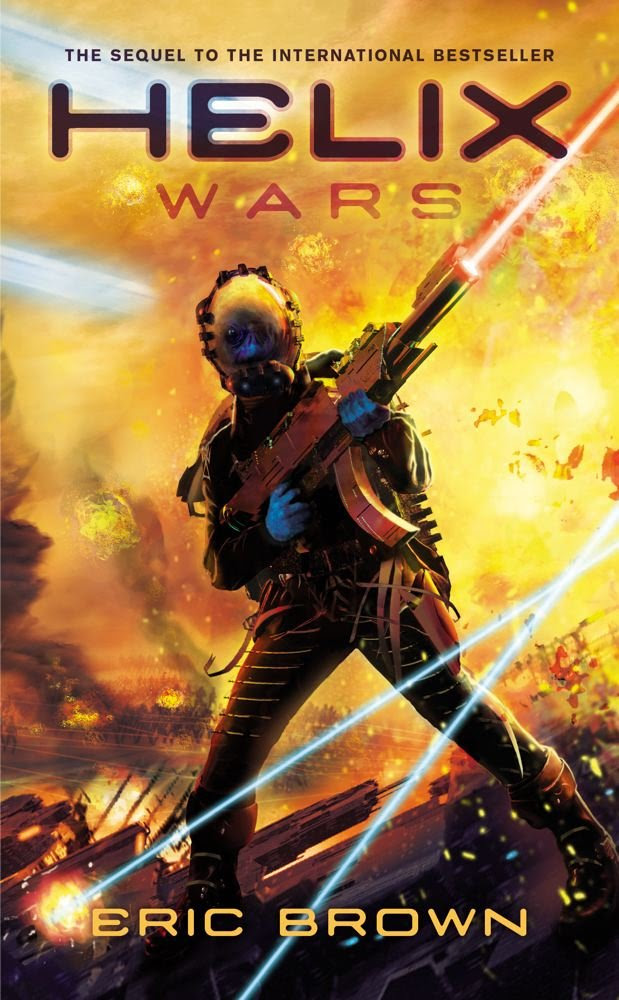 In Helix Wars, the follow-up to Eric Brown’s space opera Helix, the author returns to the fascinating world he created with a story set about two hundred centuries after the previous novel concluded. The majority of the characters from the first volume are historical figures, legends in the human settlement of New Earth. At the end of Helix, humanity was given one of the many worlds on the Helix and was tasked with being the Peacekeepers for all the worlds. Each world is inhabited by mostly enlightened and peace-faring races. The Builders, the ancient race of aliens who built the Helix, only invited advanced, peaceful races who are willing to relinquish thoughts of war to inhabit the myriad of worlds.

While Helix Wars is very much Jeff’s novel, Brown provides the supporting characters, like Calla, with a trajectory of their own that is nearly as fascinating. Also part of the orbit of Jeff’s supporting characters is Kranda, from the alien race of Mahkan. Even though the Mahkan are engineers, there’s a proud warrior race feel to them as well. Jeff’s ex-wife is developed enough that her plight doesn’t bog down the overall plot, rather adds to it and comes around to the whole by the end of the novel. When Jeff and Kranda do meet up, Brown engages the characters in a lot of philosophical debates regarding death and the steps necessary to ensure their mission’s completeness.

Books That Make Us Shake Our Heads at Other Readers
An inevitability of reading many books (and subsequently reviewing books) is feeling disconnected when reading a book which has been well-received by a great number of people. In other words, you begin to wonder who is missing something: you as the reader for not “getting” what is so great about the book, or the other readers for helping to raise the book to its hallowed status. This idea was inspired, in large part, by the blog post The Reviewer’s Dilemma: Did I Miss Something? by Ria Bridges. That’s the long way of asking this week’s panelists the following question: