At this point, this would be about an average week of arrivals, since there seems to be an uptick in recent weeks. Anything her you, my fine readers, fancy? 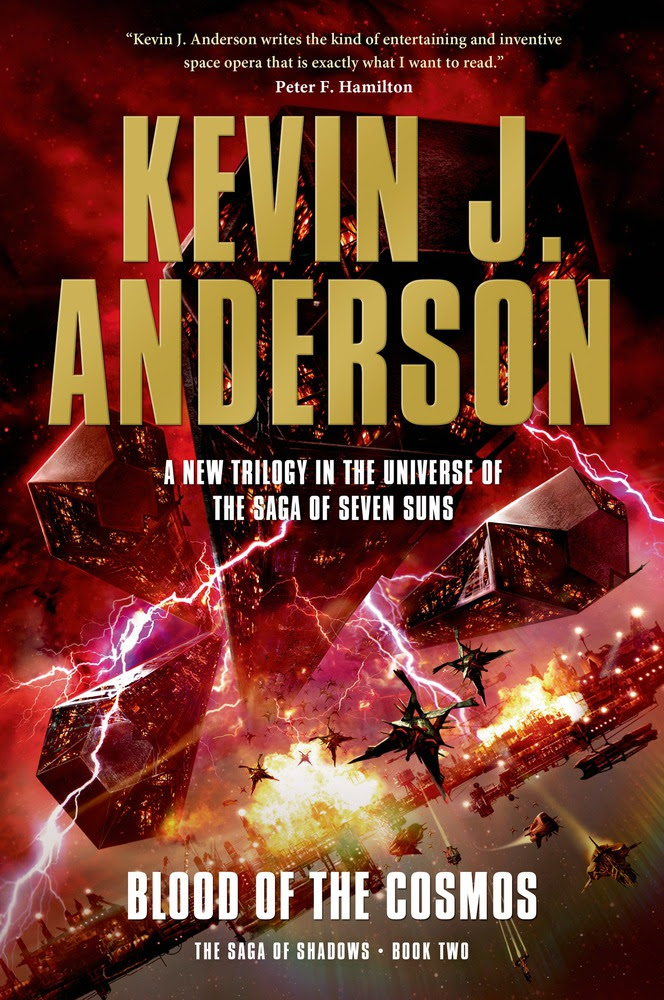 Blood of the Cosmos (Saga of Shadows #2) and Kevin J. Anderson (Tor Hardcover 06/02/2015) - Second installment of Anderson’s Saga of Shadows series the first of which was shortlisted for the Hugo Award. This series itself is a sequel to the Saga of the Seven Suns series. This is the first book of either series I’ve received.

Blood of the Cosmos: the second book in Kevin J. Anderson's Saga of Shadows trilogy.
An epic space opera of the titanic conflict of several galactic civilizations against a life-destroying force of shadows, a dark cosmic force that has swept through the undercurrents of the human interstellar empire.

As the second book of the trilogy opens, the humans and Ildirans, having narrowly escaped annihilation at the hands of the Shana Rei and their robot allies in Book One, are desperate to find a way to combat the black cloud of antimatter of the Shana Rei. The mysterious alien Gardeners, who had helped them previously, turn out to be a disaster in disguise and because of them, the world tree forests are again in danger. The allies believing they have found a way to stop their dreaded enemies, a new weapon is tested, but it's a horrible failure, throwing the human race and its allies to the brink of extinction.

Nemesis Games by James S.A. Corey (Orbit Books June 2015) – The Expanse is consistently my favorite space-based science fiction series, with each book landing on my top reads of the year. Cibola Burn was a bit of a game changer for the series – in a good way for a series that was already quite good.

A thousand worlds have opened, and the greatest land rush in human history has begun. As wave after wave of colonists leave, the power structures of the old solar system begin to buckle

Ships are disappearing without a trace. Private armies are being secretly formed. The sole remaining protomolecule sample is stolen. Terrorist attacks previously considered impossible bring the inner planets to their knees. The sins of the past are returning to exact a terrible price

And as a new human order is struggling to be born in blood and fire, James Holden and the crew of the Rocinante must struggle to survive and get back to the only home they have left. 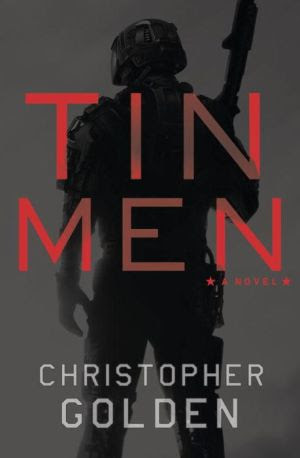 Tin Men by Christopher Golden (Ballantine Hardcover, 06/23/2015) – Much of Golden’s oeuvre lies in the darker, fantastic realms of Speculative Fiction. This one is a slight directional change into a Military SF/Apocalyptic tale. I’ve read a book or two by him and I’ve always wanted to go back and read more. This is the final/finished copy of the ARC I received in March.

Brad Thor meets Avatar in this timely thriller for the drone age as award-winning author Christopher Golden spins the troubles of today into the apocalypse of tomorrow.

After political upheaval, economic collapse, and environmental disaster, the world has become a hotspot, boiling over into chaos of near apocalyptic proportions. In this perpetual state of emergency, all that separates order from anarchy is the military might of a United States determined to keep peace among nations waging a free-for-all battle for survival and supremacy.

But a conflict unlike any before demands an equally unprecedented fighting force on its front lines. Enter the Remote Infantry Corps: robot soldiers deployed in war zones around the world, controlled by human operators thousands of miles from the action. PFC Danny Kelso is one of these “Tin Men,” stationed with his fellow platoon members at a subterranean base in Germany, steering their cybernetic avatars through combat in the civil-war-ravaged streets of Syria. Immune to injury and death, this brave new breed of American warrior has a battlefield edge that’s all but unstoppable—until a flesh-and-blood enemy targets the Tin Men’s high-tech advantage in a dangerously game-changing counter strike.

When anarchists unleash a massive electromagnetic pulse, short-circuiting the world’s technology, Kelso and his comrades-in-arms find themselves trapped—their minds tethered within their robot bodies and, for the first time, their lives at risk.

Now, with rocket-wielding “Bot Killers” gunning for them, and desperate members of the unit threatening to go rogue, it’s the worst possible time for the Tin Men to face their most crucial mission. But an economic summit is under terrorist attack, the U.S. president is running for his life, and the men and women of the 1st Remote Infantry Division must take the fight to the next level—if they want to be the last combatants standing, not the first of their kind to fall forever. 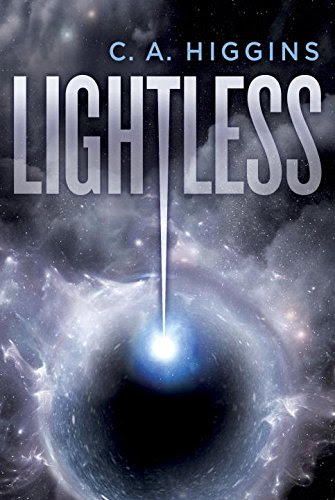 Lightless by C.A. Higgins (Del Rey Hardcover 09/25/2015) –This is another impressive looking SF debut, this time from the fine folks at Del Rey Books.

The deeply moving human drama of Gravity meets the nail-biting suspense of Alien in this riveting science fiction debut. With bold speculation informed by a degree in astrophysics, C. A. Higgins spins an unforgettable “locked spaceship” mystery guaranteed to catapult readers beyond their expectations—and into brilliantly thrilling new territory.

Serving aboard the Ananke, an experimental military spacecraft launched by the ruthless organization that rules Earth and its solar system, computer scientist Althea has established an intense emotional bond—not with any of her crewmates, but with the ship’s electronic systems, which speak more deeply to her analytical mind than human feelings do. But when a pair of fugitive terrorists gain access to the Ananke, Althea must draw upon her heart and soul for the strength to defend her beloved ship.

While one of the saboteurs remains at large somewhere on board, his captured partner—the enigmatic Ivan—may prove to be more dangerous. The perversely fascinating criminal whose silver tongue is his most effective weapon has long evaded the authorities’ most relentless surveillance—and kept the truth about his methods and motives well hidden.

As the ship’s systems begin to malfunction and the claustrophobic atmosphere is increasingly poisoned by distrust and suspicion, it falls to Althea to penetrate the prisoner’s layers of intrigue and deception before all is lost. But when the true nature of Ivan’s mission is exposed, it will change Althea forever—if it doesn’t kill her first. 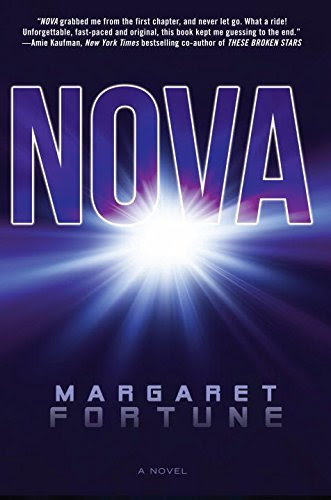 Nova by Margaret Fortune (DAW Hardcover 06/09/2015) – This is Fortune’s debut novel. If I’m not mistaken, when I was at the Tor.com meet-up last September, I think this book came up in conversation with some folks quite favorably. This looks good and impressive that an SF debut is publishing in hardcover.

The clock activates so suddenly in my mind, my head involuntarily jerks a bit to the side. The fog vanishes, dissipated in an instant as though it never was. Memories come slotting into place, their edges sharp enough to leave furrows, and suddenly I know. I know exactly who I am.

My name is Lia Johansen, and I was named for a prisoner of war. She lived in the Tiersten Internment Colony for two years, and when they negotiated the return of the prisoners, I was given her memories and sent back in her place.

And I am a genetically engineered human bomb.

Lia Johansen was created for only one purpose: to slip onto the strategically placed New Sol Space Station and explode. But her mission goes to hell when her clock malfunctions, freezing her countdown with just two minutes to go. With no Plan B, no memories of her past, and no identity besides a name stolen from a dead POW, Lia has no idea what to do next. Her life gets even more complicated when she meets Michael Sorenson, the real Lia’s childhood best friend.

Drawn to Michael and his family against her better judgment, Lia starts learning what it means to live and love, and to be human. It is only when her countdown clock begins sporadically losing time that she realizes even duds can still blow up. If she wants any chance at a future, she must find a way to unlock the secrets of her past and stop her clock. But as Lia digs into her origins, she begins to suspect there’s far more to her mission and to this war, than meets the eye. With the fate of not just a space station but an entire empire hanging in the balance, Lia races to find the truth before her time—literally—runs out.

The Banished of Muirwood (Covenant of Muirwood Book 1)by Jeff Wheeler (47North Trade Paperback 08/18/2015) – Wheeler has been spinning tales in his Muirwood milieu for man years, this is his latest and seems a decent entry point for new readers.

n a stand-alone series set in the world of Muirwood, eighteen-year-old Maia is the exiled princess of Comoros and heir to the throne. As a result of her father’s ceaseless need for authority, she was left disinherited and forced to live as a servant in her enemy’s home. When the king invites chaos into the land by expelling the magical order known as the Dochte Mandar, Maia finds herself on a perilous quest to save her people. To survive, she must use magic she has learned in secret—despite the fact that women are forbidden to control it. Hunted by enemies at every turn, Maia realizes that danger lurks within her, too. Her powers threaten to steal not only her consciousness but also her sense of right and wrong. Can she set herself free and save the realm she loves—even if that realm has forgotten her?