Another significant batch of books, many of which look very appealing. 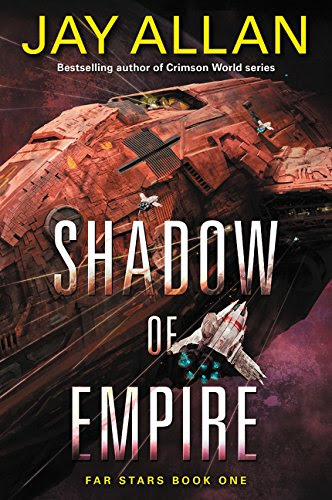 Shadow of Empire (Far Star Trilogy #1) by Jay Allan (Harper Voyager 11/10/2015) – Allan makes the jump from small press/self-published to one of the Big SF publishers. This launches a Space Opera trilogy to be published over the course of three months. That is proof of a publisher showing confidence in a writer.


The first installment in the Far Star series, a swashbuckling space saga that introduces the daring pirate Blackhawk and the loyal crew of the Wolf’s Claw, from the author of the bestselling Crimson Worlds saga.

Smuggler and mercenary Arkarin Blackhawk and the crew of the ship Wolf’s Claw are freelance adventurers who live on the fringe of human society in the Far Stars. A veteran fighter as deadly with a blade as he is with a gun, Blackhawk is a man haunted by a dark past. Even his cynicism cannot banish the guilt and pain that threaten his sanity.

Sent to rescue the kidnapped daughter of his longtime friend Marshal Augustin Lucerne, Blackhawk and his crew find themselves drawn into one deadly fight after another. When the Wolf’s Claw is damaged, they are forced to land on a remote planet subsumed by civil war. Pulled unwittingly into the conflict, they uncover disturbing information about secret imperial involvement that could upset the plans of Lucerne.

For the Marshal is determined to forge a Far Stars Confederation powerful enough to eliminate all imperial influence and threats in the sector. He needs a skilled warrior like Blackhawk on his side, but the mercenary, plagued by dark memories from the past, refuses to join the cause. All too soon, though, he and his crew will have to take a stand. 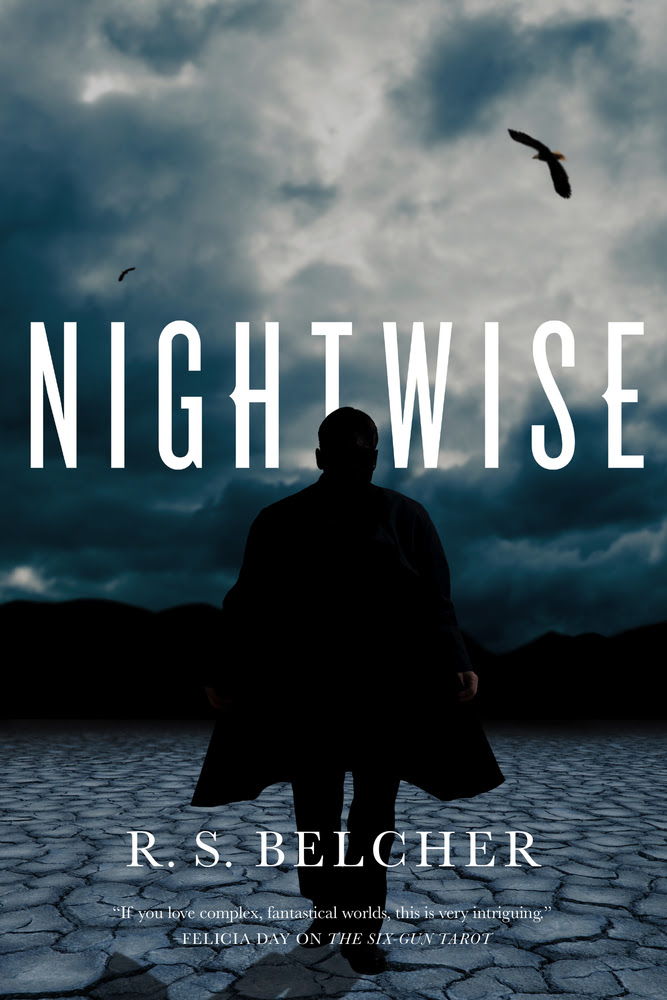 Nightwise by R.S. Belcher (Tor, Hardcover 08/11/2015) – After a well-received Weird West/Steampunk series, Belcher turns his pen to something a little bit darker.

In the more shadowy corners of the world, frequented by angels and demons and everything in-between, Laytham Ballard is a legend. It's said he raised the dead at the age of ten, stole the Philosopher's Stone in Vegas back in 1999, and survived the bloodsucking kiss of the Mosquito Queen. Wise in the hidden ways of the night, he's also a cynical bastard who stopped thinking of himself as the good guy a long time ago.

Now a promise to a dying friend has Ballard on the trail of an escaped Serbian war criminal with friends in both high and low places--and a sinister history of blood sacrifices. Ballard is hell-bent on making Dusan Slorzack pay for his numerous atrocities, but Slorzack seems to have literally dropped off the face of the Earth, beyond the reach of his enemies, the Illuminati, and maybe even the Devil himself. To find Slorzack, Ballard must follow a winding, treacherous path that stretches from Wall Street and Washington, D.C. to backwoods hollows and truckstops, while risking what's left of his very soul . . . . 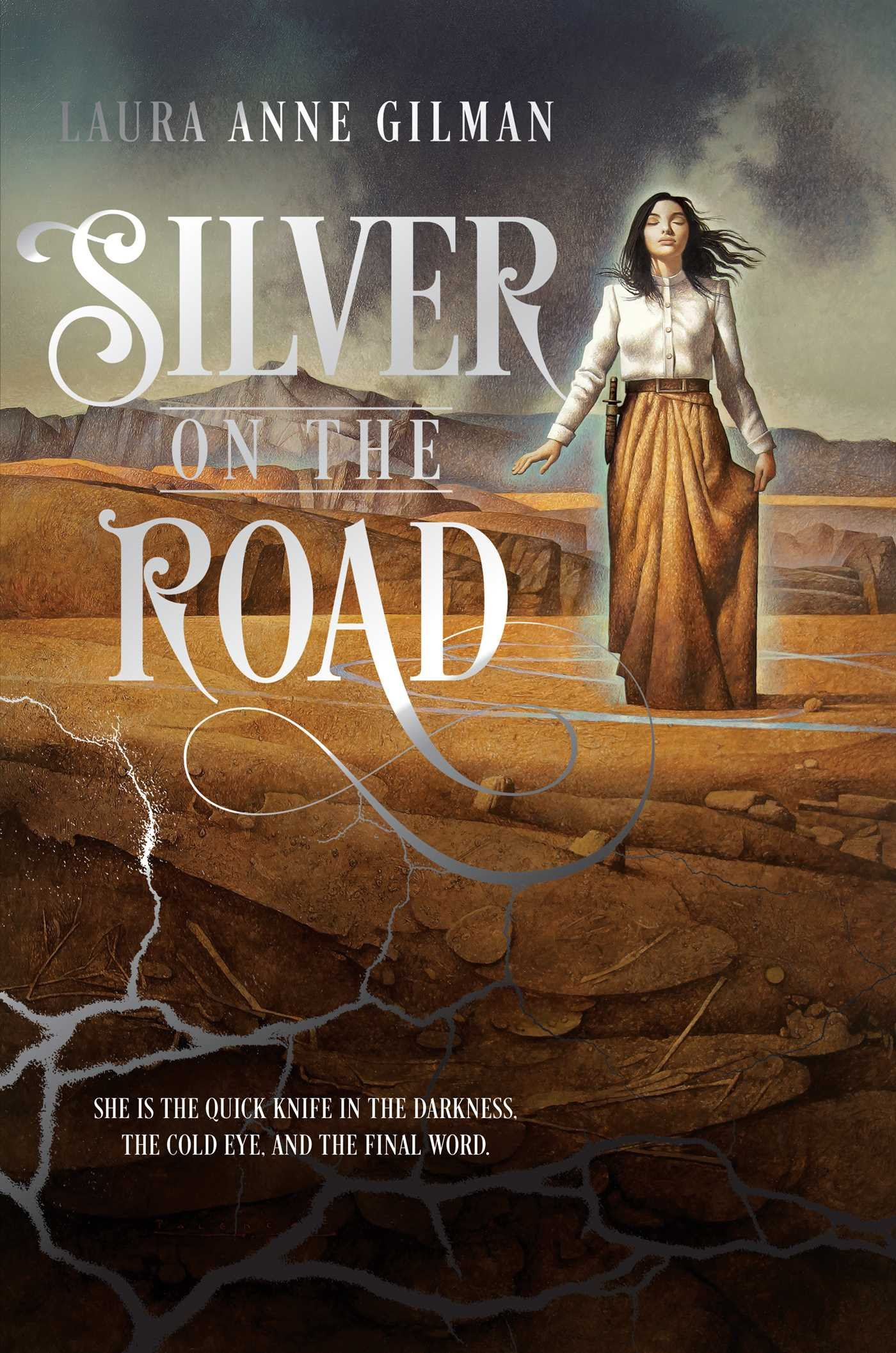 Silver on the Road (The Devil’s West #1) by Laura Ann Gilman (Saga Press Hardcover 10/06/2015) – Gilman is a very prolific writer, slipping between sub genres and genres. This one has a nice weird/horror west flavor to it.

“The right hand gathers and gives, visible to all. But the left hand, Isobel, the manu sinistra? It moves in shadows, unseen, unheard…. Until I deem it time for it to be seen and heard. And when it moves, its work cannot be undone. It is the strength of the Territory, the quick knife in the darkness, the cold eye and the final word.”

She looked up, away from his hands, and was caught by a gaze the burnt gold of the morning sun.

“I have been lacking a left hand for too long, now. Are you strong enough for that, Isobel nee Lacoyo Távora? Is the iron in your spine, the fire in your blood, proof against my forging?”

Back East, they claim the so-called Devil’s West is overrun by magic, magicians, and monsters. But to Isobel, it’s home. She grew up in a saloon, trained to serve drinks and fold laundry, to read those who came to the gambling tables, and report back to her boss on what she saw.

But when she comes of age, she is given a choice….

Now the Territory’s Left Hand, Isobel takes to the road, accompanied by the laconic rider Gabriel, who will teach her about the Territory, its people and its laws. But she needs to learn quickly: The bones of the earth are cracking, and the Hand has work to do… 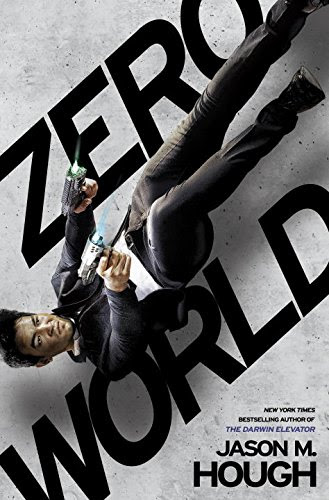 Zero World by Jason M. Hough (Del Rey Hardcover 08/11/2015) – Hough’s trilogy earned him some very good sales and acclaim and graduated him to Hardcover for this release.


Published in rapid succession, Jason M. Hough’s first three novels, The Darwin Elevator, The Exodus Towers, and The Plague Forge; earned mountains of praise and comparisons to such authors as James S. A. Corey and John Scalzi. Now Hough returns with a riveting near-future spy thriller that combines the adrenaline of a high-octane James Bond adventure with mind-blowing sci-fi speculations worthy of Christopher Nolan’sInception.

Technologically enhanced superspy Peter Caswell has been dispatched on a top-secret assignment unlike any he’s ever faced. A spaceship that vanished years ago has been found, along with the bodies of its murdered crew—save one. Peter’s mission is to find the missing crew member, who fled through what appears to be a tear in the fabric of space. Beyond this mysterious doorway lies an even more confounding reality: a world that seems to be Earth’s twin.

Peter discovers that this mirrored world is indeed different from his home, and far more dangerous. Cut off from all support, and with only days to complete his operation, Peter must track his quarry alone on an alien world. But he’s unprepared for what awaits on the planet’s surface, where his skills will be put to the ultimate test—and everything he knows about the universe will be challenged in ways he never could have imagined. 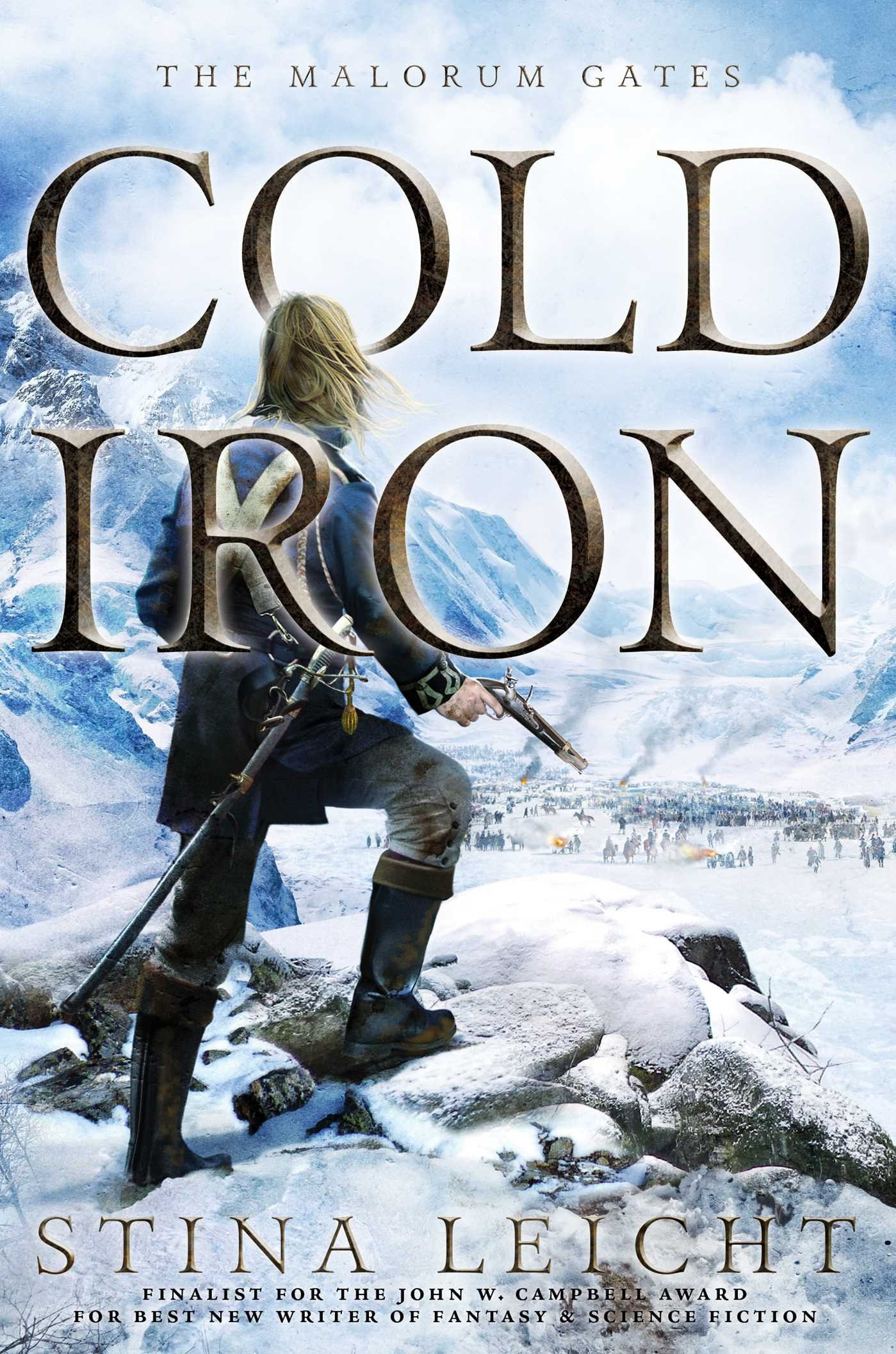 Cold Iron (The Malorum Gates #1) by Stina Leicht (Saga Press Hardcover 07/14/2015) – Leicht’s new series is a huge epic/flintlock fantasy which asks the question, “What would Lord of the Rings look like if Tolkien were American?”

Fraternal twins Nels and Suvi move beyond their royal heritage and into military and magical dominion in this flintlock epic fantasy debut from a two-time Campbell Award finalist.

Prince Nels is the scholarly runt of the ancient Kainen royal family of Eledore, disregarded as flawed by the king and many others. Only Suvi, his fraternal twin sister, supports him. When Nels is ambushed by an Acrasian scouting party, he does the forbidden for a member of the ruling family: He picks up a fallen sword and defends himself.

Disowned and dismissed to the military, Nels establishes himself as a leader as Eledore begins to shatter under the attack of the Acrasians, who the Kainen had previously dismissed as barbarians. But Nels knows differently, and with the aid of Suvi, who has allied with pirates, he mounts a military offensive with sword, canon, and what little magic is left in the world. 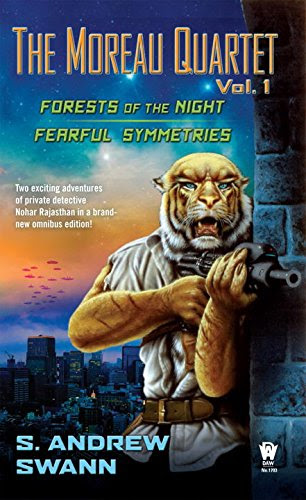 The Moreau Quartet: Volume One by S. Andrew Swann (DAW Mass Market Paperback 08/04/2015) – Swann’s been writing in this particular universe for quite some time. These are two of the earliest novels in the sequence - Forests of the Night and Fearful Symmetry. Though published order has these as books 1 and four, Fearful Symmetry is a direct sequel to Forests of the Night.

It’s 2053, and the U.S. has long since genetically engineered life successfully. “Moreaus,” humanoid and animal hybrids, and “frankensteins,” genetically manipulated humans, live as second-class citizens. Nohar Rajasthan is a moreau, a humanoid of tiger stock. Raised by a human after his parents’ death, Nohar ekes out a career as a private eye. Mixing science fiction with detective thrillers, Nohar’s story leaps off the page with all the nonstop excitement and danger of an action blockbuster.
Forests of the Night: When Nohar accepts a commission from a frankenstein to investigate the death of the campaign manager of a local politico, all hell breaks loose. Nohar finds himself targeted by everyone from local cops to federal agents to a drug-running gang to an assassin with a 100% kill rate.

Fearful Symmetries: Nohar retired from the private eye business ten years ago, and just wants to spend his remaining time in the peace and quiet of his wilderness homestead. So when a human lawyer asks him to take on a missing moreau case, he refuses–and soon after is attacked by a paramilitary team. Now Nohar must find the missing moreau and discover why someone wants him dead. 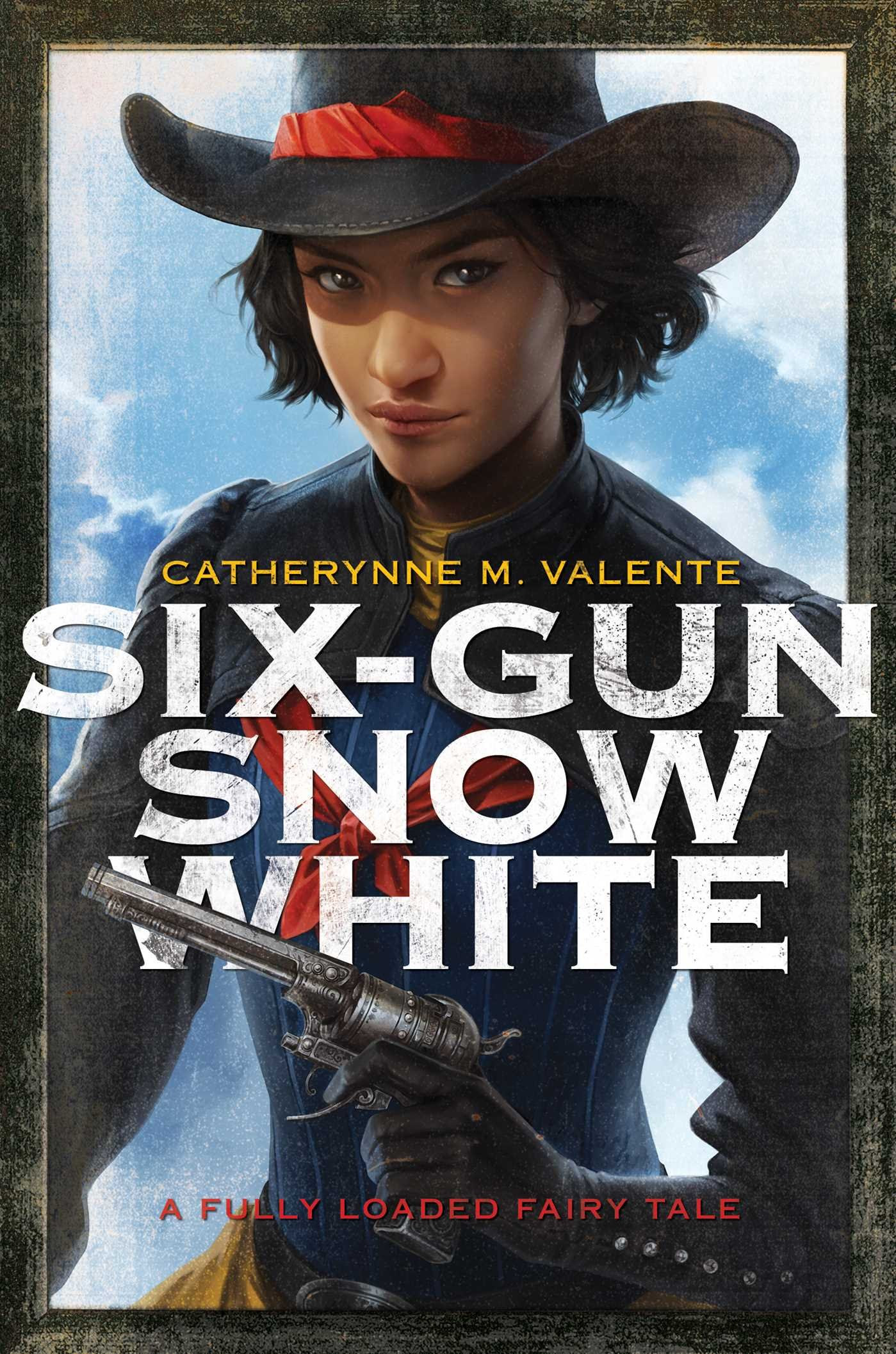 Six Gun Snow-White by Catherynne M. Valente (Saga Press Hardcover 11/09/2015) – Valente seems to write only well-received award worthy stuff. This western reinvention of Snow White looks like it could be a great deal of fun.

A New York Times bestselling author offers a brilliant reinvention of one of the best-known fairy tales of all time with Snow White as a gunslinger in the mythical Wild West.

Forget the dark, enchanted forest. Picture instead a masterfully evoked Old West where you are more likely to find coyotes as the seven dwarves. Insert into this scene a plain-spoken, appealing narrator who relates the history of our heroine’s parents—a Nevada silver baron who forced the Crow people to give up one of their most beautiful daughters, Gun That Sings, in marriage to him. Although her mother’s life ended as hers began, so begins a remarkable tale: equal parts heartbreak and strength. This girl has been born into a world with no place for a half-native, half-white child. After being hidden for years, a very wicked stepmother finally gifts her with the name Snow White, referring to the pale skin she will never have. Filled with fascinating glimpses through the fabled looking glass and a close-up look at hard living in the gritty gun-slinging West, this is an utterly enchanting story…at once familiar and entirely new.