In this week’s edition of Friday Round-Up I bring you new reviews of Robin Hobb and N.K. Jemisin. But first, a little announcement.

As some folks already know, I’ve been in a job predicament for a few years. Back in 2011, I was in a job/position I really enjoyed at a company for which I enjoyed working. Things were going well, in 2010 my group (of which I was the manager), far exceeded our goals for the program we had re-launched the previous year and everybody in the group received one-time bonuses for exceeding those goals. Then the company did some reorganization and as a result of “corporate restructuring,” I was squeezed out in February 2011. What helped to slightly soften the blow is that my supervisor (the Vice President of the group), left the company shortly after I was let go because he saw the writing on the wall.

A few months later, a very good friend of mine who works for A very large Telecommunications & Technology company helped me out big time. Some of the groups at the company where he worked were looking to bring in people (as contractors) to help build up a product line. So, for the past four years (which was only supposed to be a temporary stop) I’ve been working there in what is essentially a digital assembly line capacity. To be honest, it was pretty good money, but the job has very, very little in common with my Marketing & Marketing Proposals and Publishing background. That, plus the associated instability of being a contracted employee led me to continue my job search. About a year ago, the company brought me (and a handful of folks who began as contractors the same time I did) more fully into the fold, converting me from contractor to Term Employee (essentially a hybrid between Contractor and Full-Time Employee, but working directly from the company). As I said, all this time, I was still looking for a more stable (i.e. permanent and not contractor) position more closely aligned with my decade and a half of Marketing and/or Publishing experience.

After a slew of interviews over the years (many phone interviews, which led to some face-to-face interviews) with different companies, my search has ended and I will be starting on Monday August 18 doing work much more in line with my past experience (marketing proposals) for a very impressive company with great leader at its helm and a culture (based on the interviews I’ve had, research into the company and coming to realize a friend has a relative at the company) that will help me grow and further my career along a stable path. I’m very excited for this slight career reboot and cannot wait to join the new company on Monday. For more specifics on what that is and the company, I’ll be updating my LinkedIn profile to reflect the new position once I officially begin the new job.

One thing I've learned in my job searching the past few years compared to job searching even 8 to 10 years ago is that EVERYTHING is automated and it is challenging to level up in the process for one job and actually communicate with a human being rather than an automated interface.

Back to the SFF stuff, with my reviews of two highly anticipated Fantasy releases. Last week, I posted my review of the powerful, challenging, and stunning novel from N.K. Jemisin, The Fifth Season: The narrative, is initially, very chaotic. Jemisin employs multiple character points of view, one for each chapter, give the feel of a dangerous world were nobody is safe. The novel is post-apocalyptic, but takes place on a secondary world. A world where the planet is extremely unstable, where magicians (Orogenes) with powers based on geology work with technology in the hopes of keeping the world, on a literal, tectonic level, stable.
...
We are introduced to this world through the eyes of Essun, and damn does Jemisin get the emotional ball rolling very quickly. Upon returning home, she realizes her husband has brutally murdered their son. This shocking moment informs Essun’s tale. The other narrators, Damaya and Syenite/Syen, travel a road no less wrought with heartbreak and sorrow and undergo changes of their own over the course of their own narrative journeys, not unlike the geological cataclysms that strike their world. Jemisin marvelously portrayed women whose changes in demeanor, and person, mirror the global changes. Not only does the story come across through these three women’s eyes/voices, each of the three story threads is told in a different narrative voice, third person narrative for Syen and Damaya, while Essun’s story is told through the rare second person present, as if we the reader are Essun. As I said, there’s some chaotic elements in the story and the narrative reflects this chaos. It takes some acclimating, but is an ultimately very rewarding storytelling technique.

This week (Tuesday, the day of the book’s launch), I posted my review of perhaps my most anticipated 2015 Fantasy novel, Robin Hobb’s Fool’s Quest: 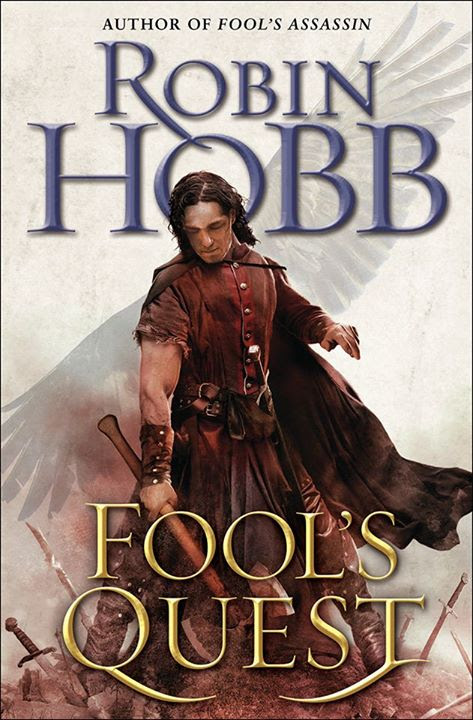 Fool’s Quest is the second installment of The Fitz and the Fool Trilogy, which itself is the most recent in a long line of stories set in Robin Hobb’s Realm of the Elderlings (three trilogies, a quartet, and now this in-progress trilogy for a total of 15 books up to now). To say Fool’s Quest might be a tough sell for new readers is an understatement. Much of the action is predicated on events that have transpired in previous volumes of this mega-series, and most importantly on the previous installment Fool’s Assassin. But…but…before I launch into my thoughts on this volume, I’ll preface it with this. If readers have any doubt that Robin Hobb is one of the finest writers in the Fantasy genre, then they haven’t read any of her work. From the beginnings of Assassin’s Apprentice in 1995 to this most recent novel, few can balance, character, prose, and story so well. So do yourself a favor, go read Assassin’s Apprentice (the novel that started it all) or Fool’s Assassin, the first novel in this new trilogy which does work well for new readers. (This preamble also provided ample spoiler space because talking at any length about Fool’s Quest is impossible without spoiling events of Fool’s Assassin).
...
The sense of urgency in the novel is extremely heightened, despite the same reserved pace that made Fool’s Assassin such a joy to read and experience. Fool’s sense of urgency to strike back at his tormentors, combined with Fitz’s desperation to find his stolen daughter made for incredible tension. Fitz’s experience; however, makes him realize rushing into their situation will only be a detriment to their success. Robin Hobb balanced their tension with a quiet reserve during many of the court scenes and meetings that Fitz was obliged to experience very well, giving both frustration and hope. Hobb’s magnetic, captivating prose completely wrapped itself around me.

Glad to hear about your Job news, Rob

Congrats, Rob! That sounds like a wonderful move for your career and personal life. Best of luck with the change.

Congrats on the new job and presumed stability!