Just two books this week, and books for which I'd already received copies.

Hunted (The Iron Druid Chronicles #8) by Kevin Hearne (Del Rey, Hardcover 01/26/2016) – I’ve enjoyed every installment of this series Hammered is blurbed don the front, but because I also really enjoyed Hounded, loved it and posted the Hexed, Tricked, and Hunted This is the hardcopy of the ARC I received in November.

When a Druid has lived for two thousand years like Atticus, he’s bound to run afoul of a few vampires. Make that legions of them. Even his former friend and legal counsel turned out to be a bloodsucking backstabber. Now the toothy troublemakers—led by power-mad pain-in-the-neck Theophilus—have become a huge problem requiring a solution. It’s time to make a stand.

As always, Atticus wouldn’t mind a little backup. But his allies have problems of their own. Ornery archdruid Owen Kennedy is having a wee bit of troll trouble: Turns out when you stiff a troll, it’s not water under the bridge. Meanwhile, Granuaile is desperate to free herself of the Norse god Loki’s mark and elude his powers of divination—a quest that will bring her face-to-face with several Slavic nightmares.

As Atticus globetrots to stop his nemesis Theophilus, the journey leads to Rome. What better place to end an immortal than the Eternal City? But poetic justice won’t come without a price: In order to defeat Theophilus, Atticus may have to lose an old friend.

Praise for Kevin Hearne and The Iron Druid Chronicles

“Celtic mythology and an ancient Druid with modern attitude mix it up in the Arizona desert in this witty new fantasy series.”—Kelly Meding, author of Chimera

“Exciting . . . [Atticus] is one of the best main characters currently present in the urban fantasy genre.”—Fantasy Book Critic, on Tricked 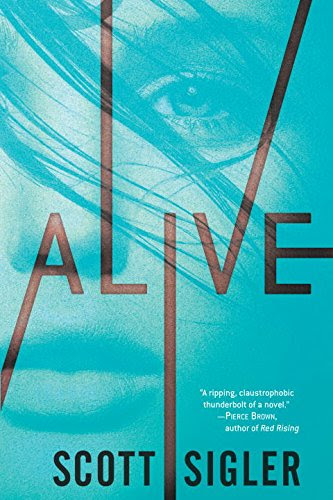 ALIVE (Generations Trilogy #1) by Scott Sigler (Del Rey Hardcover 02/02/2016) – I listened to Scott’s first podcast two novel Infected and Contagious and loved this when it published in hardcover last summer.

For fans of The Hunger Games, Divergent, and Red Rising comes a gripping sci-fi adventure in which a group of teenagers wake up in a mysterious corridor with no knowledge of who they are or how they got trapped. Their only hope lies with an indomitable young woman who must lead them not only to answers but to survival.


“I open my eyes to darkness. Total darkness. I hear my own breathing, but nothing else. I lift my head . . . it thumps against something solid and unmoving. There is a board right in front of my face. No, not a board . . . a lid.”


A teenage girl awakens to find herself trapped in a coffin. She has no idea who she is, where she is, or how she got there. Fighting her way free brings little relief—she discovers only a room lined with caskets and a handful of equally mystified survivors. Beyond their room lies a corridor filled with bones and dust, but no people . . . and no answers.

She knows only one thing about herself—her name, M. Savage, which was engraved on the foot of her coffin—yet she finds herself in charge. She is not the biggest among them, or the boldest, but for some reason the others trust her. Now, if they’re to have any chance, she must get them to trust each other.


Whatever the truth is, she is determined to find it and confront it. If she has to lead, she will make sure they survive. Maybe there’s a way out, a rational explanation, and a fighting chance against the dangers to come. Or maybe a reality they cannot comprehend lies just beyond the next turn.
at 1/17/2016