This week's haul, which arrived during the week before the 2 feet of snow on Saturday 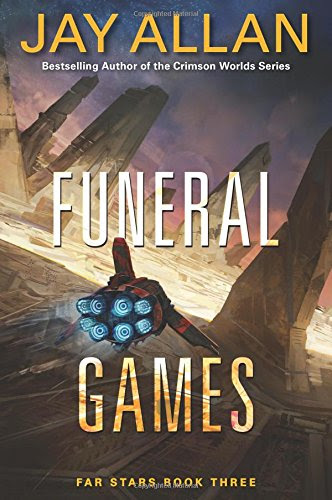 Funeral Games (Far Star Trilogy #3) by Jay Allan (Harper Voyager 01/19/2016) – Allan winds down his trilogy in just three months. These monthly releases schedules seem to do well for the writer and the publisher.


The battle for the unification and rule of the Far Stars Confederation will be decided in this exhilarating third and final book in the swashbuckling space saga begun with Shadow of Empire and Enemy in the Dark.

The Far Stars stands on the edge of a precipice. The forces of Governor Vos have surged forth, conquering worlds and imposing the emperor’s brutal rule over millions. Only one thing stands in the way of total victory: Marshal Augustin Lucerne and his newly created Confederation. Vos has a simple plan: assassinate the marshal, and manipulate his generals to fight over his legacy, destroying each other in the process.

But another threat lurks: Arkarin Blackhawk. The smuggler and mercenary has been the marshal’s ally, working in the shadows and unraveling Vos’ plans. The governor can only hope the mysterious adventurer continues to resist a formal position in the Confederation.

Or he can have Blackhawk assassinated, too.

Because with Blackhawk succeeding Lucerne, the black and gold imperial flags will be stained red with blood. For his is a dark and dangerous past, and if he is put at the helm of the Confederation armies, the brutal imperial general he once had been may rise once again.

The Far Stars are facing the final battle. The Imperials seem unstoppable. But if Blackhawk somehow survives—and can come to grips with the horror deep within him—he just might be able to save the Far Stars from the iron hand of empire

Eclipse Phase: After the Fall edited by by Jaym Gates (Posthuman Studios 01/19/2016) – Jaym has done a lot of great things for the genre community, this is her latest anthology. Some impressive names in the line-up including Madeline Ashby, Ken Liu, and Fran Wilde.


It was the dawn of a new era, a technological and biological golden age for humanity. They had attained the stars, surmounted their weak physical shells, and found the cusp of a technological utopia. But those days slipped from their grasp, and now conflict runs rampant in the solar system. AIs and transhumanity struggle for survival, for balance, for a new golden age.

Their stories are many.

The anthology will be released digitally in January 2016 with a print release following in the spring, and is edited by Jaym Gates in collaboration with the Posthuman creators.