A pretty slow week, this past week perhaps due to Snowmageddon 2010. No complaints here after last week had me drowning in new arrivals: 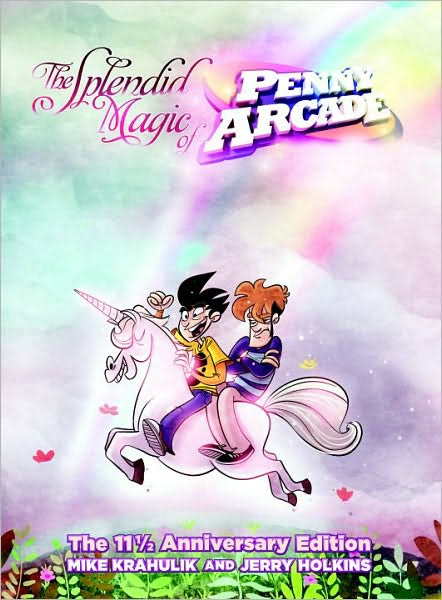 The Splendid Magic of Penny Arcade: The 11 1/2 Anniversary Edition by Jerry Holkins and Mike Krahulik (Ballantine, Hardcover 02/23/2010) – This is a retrospective of the popular Web comic

The book is now open.

Entitled The Splendid Magic of Penny Arcade, it details the history of a comic strip called Penny Arcade. The comic appears to catalog the lives of two young men who are utterly steeped in popular culture.

Each chapter gathers into a coherent beam of savory trivia, strange facts, formerly mysterious origins, biographical information, interviews, inaugural conventions, an unlikely charity, and comic strips. You get the sense that some of the content may be apocryphal—for example, the part where they eat a whole wolf basically comes out of nowhere. Also, if one of them really did become “King of the Britons,” you’re sure you would have heard about it somewhere else.

You close the book and place it back on the shelf. Maybe next time..

Dragonfly Falling (Shadows of the Apt 2) by Adrian Tchaikovsky (Pyr , Trade Paperback 04/13/2010) – One (of the many) things Lou Anders and the fine folks at Pyr have been very good at doing is rolling out these trilogies in monthly succession. It worked great for Mark Chadbourn and James Barclay and I suspect it will work well for Adrian Tchaikovsky. As I’ve mentioned, I’ve seen and read good things about this series of books. This is an ARC of the 2nd book of the series.


The armies of the Wasp Empire are on the march, and first to feel their might will be the city of Tark, which is even now preparing for siege. Within its walls Salma and Totho must weather the storm, as the Ant-kinden take a stand, against numbers and weaponry such as the Lowlands have never seen.

After his earlier victory against them, the Empire's secret service has decided that veteran artificer Stenwold Maker is too dangerous to live. So disgraced Major Thalric is dispatched on a desperate mission, not only to eliminate Stenwold himself but to bring about the destruction of his beloved city of Collegium, and thus end all hope of intelligent resistance to the remorseless imperial advance.

While the Empire's troops are laying waste all in their way, the young Emperor himself is treading a different path. His thoughts are on darker things than mere conquest, however, and if he attains his goal he will precipitate a reign of blood that will last a thousand years.

Email ThisBlogThis!Share to TwitterShare to FacebookShare to Pinterest
Labels: Books in the Mail, Pyr