Another week, another haul of books for review from publishers:

The Best Horror of the Year: Volume 2 by Ellen Datlow (Trade Paperback 3/09/2010 Night Shade Books) – The second volume in the latest incarnation of Ellen Datlow’s annual retrospective on horror

Celebrities take refuge in a white-walled mansion as plague and fever sweep into Cannes; a killer finds that the living dead have no appetite for him; a television presenter stumbles upon the chilling connection between a forgotten animal act and the Whitechapel Murders; a nude man unexpectedly appears in the backgrounds of film after film; mysterious lights menace the crew of a small plane; a little girl awakens to discover her nightlight--and more--missing; two sisters hunt vampire dogs in the wild hills of Fiji; lovers get more than they bargained for in a decadent discotheque; a college professor holds a classroom mesmerized as he vivisects Poe's "The Masque of the Red Death"...

What frightens us, what unnerves us? What causes that delicious shiver of fear to travel the lengths of our spines? It seems the answer changes every year. Every year the bar is raised; the screw is tightened. Ellen Datlow knows what scares us; the seventeen stories included in this anthology were chosen from magazines, webzines, anthologies, literary journals, and single author collections to represent the best horror of the year.

Gardens of the Sun by Paul McAuley (Pyr Trade Paperback 03/15/2010) – Dan recently reviewed The Quiet War and he really enjoyed it. I suspect he’ll enjoy this one, too.

The Quiet War is over. The city-states of the moons of Jupiter and Saturn, founded by descendants of refugees from Earth's repressive regimes, the Outers, have fallen to the Three Powers Alliance of Greater Brazil, the European Union, and the Pacific Community. A century of enlightenment, rational utopianism, and exploration of new ways of being human has fallen dark. Outers are herded into prison camps and forced to collaborate in the systematic plundering of their great archives of scientific and technical knowledge, while Earth's forces loot their cities and settlements and ships, and plan a final solution to the "Outer problem."

But Earth's victory is fragile, and riven by vicious internal politics. While seeking out and trying to anatomize the strange gardens abandoned in place by the Outers' greatest genius, Avernus, the gene wizard Sri Hong-Owen is embroiled in the plots and counterplots of the family that employs her. The diplomat Loc Ifrahim soon discovers that profiting from victory isn't as easy as he thought. And on Earth, in Greater Brazil, the democratic traditions preserved and elaborated by the Outers have infected a population eager to escape the tyranny of the great families who rule them.

Meanwhile, in the outer reaches of the Solar System, a rag-taggle group of refugees struggle to preserve the last of the old ideals. And on Triton, fanatical members of a cabal prepare for a final battle that threatens to shatter the future of the human species.

After a conflict fought to contain the expansionist, posthuman ambitions of the Outers, the future is as uncertain as ever. Only one thing is clear. No one can escape the consequences of war—especially the victors.

Oath of Fealty (The Chronicles of Paksenarrion’s World) by Elizabeth Moon (Del Rey, Hardcover 03/16/2009) – Moon’s Deeds of Paksennarrion is very highly acclaimed and this is the authors first novel in that world in very long time. I started reading this about a week ago and I’m enjoying it. This is the finished version of the ARC I received w-a-a-a-a-a-a-y back in November. The novel is a bit different than I expected, but it wasn’t an easy novel to put down, which I enjoyed quite a bit. I’ll be jumping into the original trilogy at some point.

When the paladin Paksenarrion saved Kieri Phelan from traitorous attack on his way to the throne of Lyonya, it seemed her work was done. Lyonya would once more have a healthy king whose taig-sense would sustain the alliance of elves and humans in this strange land. But a paladin's intervention always means change--and change sweeps through the world in the wake of her great deeds. Who will take over Kieri's former realm? What will happen to those who opposed him? From Girdish yeoman to mercenary veteran, from peasant to king, from the Eight Kingdoms of the north to the Guild League cities of the south, no one escapes the challenges--and opportunities--of this tumultuous period. Those who expected to spend the rest of their lives in the same familiar place or position must cope with these changes, or in failure contribute to
the chaos. 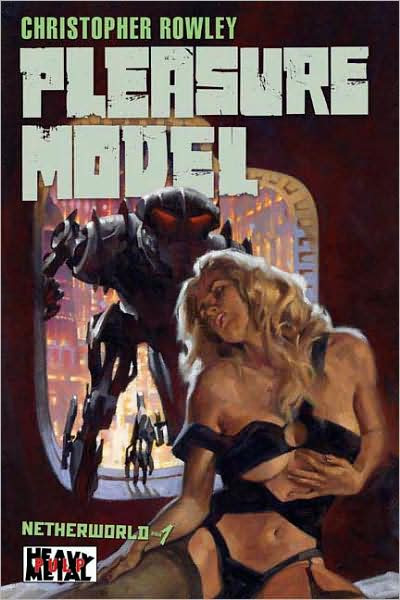 In Pleasure Model, the first book in the Netherworld trilogy, down-and out police detective Rook gets a big break when he’s assigned to a bizarre and vicious murder case. The clues are colder than the corpse and the case looks like it’ll remain unsolved—until an eyewitness is discovered. But the witness is a Pleasure Model, an illegal gene-grown human. Plesur’s only purpose is to provide satisfaction to her owner—in any way. When the murderer targets Plesur in order to eliminate the one witness, Rook takes her into hiding to protect her. Thus begins a descent into the dark world of exotic pleasure mods and their illicit buyers and manufacturers. Rook frantically looks for clues, struggling to stay one stop ahead of those looking to kill them both. But is Rook falling under Plesur’s spell….?

The Best SF and Fantasy of the Year Vol. 4 by Jonathan Strahan (Trade Paperback 3/09/2010 Night Shade Books) – Strahan keeps knocking out acclaimed anthologies and this is the fourth edition of Strahan’s annual genre best-of anthology, probably the only one to combine both SF and Fantasy.

A ruthless venture capitalist finds love--or something chemically similar--in an Atlanta strip club; a girl in grey conjures a man from a handful of moonshine; an ship blazing a highway between the stars discovers an island of life on a distant gas giant; a boy becomes a man by mastering the sword; a rebellious young woman suffers a strange incarceration; an astronaut shares a lifeboat--and herself--with an unfathomable alien; an infected girl counts the days until she becomes a vampire; an aviatrix and an inventor square off against saboteurs and monstrous brains; a big man travels to a tiny moon to examine an ancient starship covered with flowers...

The depth and breadth of science fiction and fantasy fiction continues to change with every passing year. The twenty-nine stories chosen for this book by award-winning anthologist Jonathan Strahan carefully map this evolution, giving readers a captivating and always-entertaining look at the very best the genre has to offer.

Jonathan Strahan has edited more than twenty anthologies and collections, including The Locus Awards (with Charles N. Brown), The New Space Opera (with Gardner Dozois), and The Starry Rift. He has won the Ditmar, William J. Atheling Jr. and Peter McNamara awards for his work as an anthologist and reviewer, and was nominated for a Hugo Award for his editorial work. Strahan is currently the reviews editor for Locus. 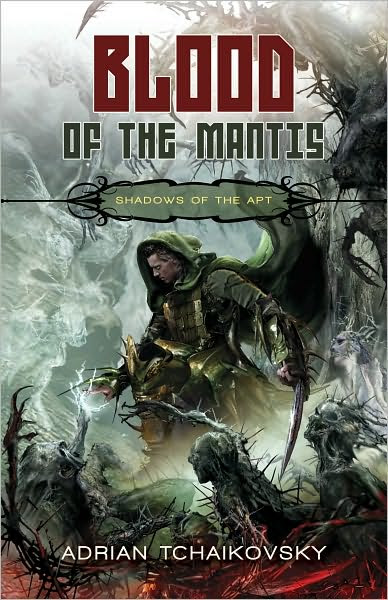 Blood of the Mantis (Shadows of the Apt 3) by Adrian Tchaikovsky (Pyr, Trade Paperback 05/25/2010) – Not that I’m complaining because I want to read them and they look great, but I feel like I’ve been getting a book in Tchaikovsky’s Shadows of the Apt series at least once a week since the new year began.


Driven by the ghosts of the Darakyon, Achaeos has tracked the stolen Shadow Box to the marsh-town of Jerez, but he has only days before the magical box is lost to him forever. Meanwhile, the forces of the Empire are mustering over winter for their great offensive, gathering their soldiers and perfecting their new weapons. Stenwold and his followers have only a short time to gather what allies they can before the Wasp armies march again, conquering everything in their path. If they cannot throw back the Wasps this spring then the imperial black-and-gold flag will fly over every city in the Lowlands before the year's end. In Jerez begins a fierce struggle over the Shadow Box, as lake creatures, secret police and renegade magicians compete to take possession. If it falls into the hands of the Wasp Emperor, however, then no amount of fighting will suffice to save the world from his relentless ambition.