A bunch of interesting looking books from Pyr, both because of the content and what I’ve heard abou them, but also because of great the physical books (cover and design) look this week: 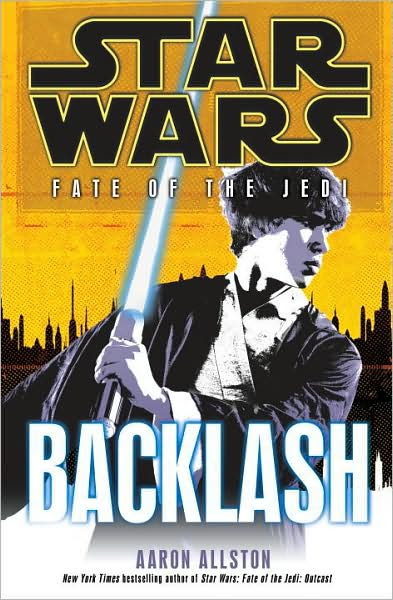 Repercussions from the dark side's fatal seduction of Jacen Solo and the mysterious plague of madness afflicting young Jedi continue to wreak havoc galaxy-wide. Having narrowly escaped the deranged Force worshippers known as the Mind Walkers, and a deadly Sith hit squad, Luke and Ben Skywalker are in pursuit of the now Masterless Sith apprentice Vestara Khai. It is a chase that leads to the forbidding planet Dathomir, where an enclave of powerful dark-side Force-wielders will give Vestara the edge she needs to escape -- and where the Skywalkers will be forced into combat for their quarry and their lives.

Meanwhile, Han and Leia Solo are on their own desperate mission, shuttling madness-stricken Jedi from Coruscant to safe haven in the Transitory Mists -- and beyond the grasp of Galactic Alliance Chief of State Natasi Daala. But the bold maneuver only intensifies Daala's fury, and she is determined to shatter Jedi Order resistance once and for all.

Yet, no greater threat exists than that which still waits in the depths of the distant Maw Cluster: A being of pure, ravenous dark-side energy named Abeloth calls out across the stars to Jedi and Sith alike. For some, it may be the ultimate source of answers crucial to their survival. For others, it could be the ultimate weapon of conquest. But for all, it is a game-changing -- and life-altering -- encounter of untold magnitude, and a tactical gambit with unimaginable consequences.

Prince of Storms (Book Four of The Entire and the Rose) by Kay Kenyon (Pyr Hardcover 01/26/2010) – I read all three books in this series Bright of the Sky, A World too Near, and City Without End) as each was released and thoroughly enjoyed them. What I received this past was the final version of the ARC I received back in September

Finally in control of the Ascendancy, Titus Quinn has styled himself Regent of the Entire. But his command is fragile. He rules an empire with a technology beyond human understanding; spies lurk in the ancient Magisterium; the Tarig overlords are hamstrung but still malevolent. Worse, his daughter Sen Ni opposes him for control, believing the Earth and its Rose universe must die to sustain the failing Entire. She is aided by one of the mystical pilots of the River Nigh, the space-time transport system. This navitar, alone among all others, can alter future events. He retires into a crystal chamber in the Nigh to weave reality and pit his enemies against each other.

Taking advantage of these chaotic times, the great foe of the Long War, the Jinda ceb Horat, create a settlement in the Entire. Masters of supreme technology, they maintain a lofty distance from the Entire's struggle. They agree, however, that the Tarig must return to the fiery Heart of their origins. With the banishment immanent, some Tarig lords rebel, fleeing to hound the edges of Quinn's reign.

Meanwhile, Quinn's wife Anzi becomes a hostage and penitent among the Jinda ceb, undergoing alterations that expose their secrets, but may estrange her from her husband. As Quinn moves toward a confrontation with the dark navitar, he learns that the stakes of the conflict go far beyond the Rose versus the Entire—extending to a breathtaking dominance. The navitar commands forces that lie at the heart of the Entire's geo-cosmology, and will use them to alter the calculus of power. As the navitar's plan approaches consummation, Quinn, Sen Ni, and Anzi are swept up in forces that will leave them forever changed.

Muse and Reverie (A Trial of Blood and Steel #2) by Joel Shepherd (Pyr, Trade Paperback, March 23, 2010) – Second volume in Shepherd’s historical fantasy, the first book of which received some good reviews.

Book Two in the quartet, A Trial of Blood & Steel, picks up the story of the brave and independent heroine, Sasha, now living in the port city of Petrodor. Away from the hills of her Lenayin homeland, Sasha is making a new life in the dark alleys and wealthy houses of Petrodor. An influential trading center, Petrodor holds the key to preventing the coming war between Lenayin and the mighty Bacosh. Together with her old mentor Kessligh, Sasha attempts to navigate the political intrigues of the port city and find a way to stop the war. It is the serrin, the beautiful but dangerous people from beyond the Bacosh, who will be the pivotal point in this struggle. How much can Sasha trust her old serrin friend Errollyn? And how much can she trust herself?

Empire in Black and Gold (Shadows of the Apt) 1 by Adrian Tchaikovsky (Pyr, Trade Paperback 03/13/2010) – This book received good and reviews when it was published in the UK last year. This is a beautiful final copy of the ARC I received late last year.


The city states of the Lowlands have lived in peace for decades, bastions of civilization, prosperity and sophistication, protected by treaties, trade and a belief in the reasonable nature of their neighbours.

But meanwhile, in far-off corners, the Wasp Empire has been devouring city after city with its highly trained armies, its machines, it killing Art . . . And now its hunger for conquest and war has become insatiable.

Only the ageing Stenwold Maker, spymaster, artificer and statesman, can see that the long days of peace are over. It falls upon his shoulders to open the eyes of his people, before a black-and-gold tide sweeps down over the Lowlands and burns away everything in its path.

But first he must stop himself from becoming the Empire's latest victim.