Some July releases for the Penguin imprints arrived, along with some stuff from Nightshade and Tor. Two of these books really have “summer blockbuster” stamped on them, and oddly enough, both sort of appeal to me more than I would otherwise have expected. Here’s the weekly rundown:

The Best Horror of the Year: Volume 3 by Ellen Datlow (Trade Paperback 3/09/2010 Night Shade Books) – The third volume in the latest incarnation of Ellen Datlow’s annual retrospective on horror

A doctor makes a late-night emergency call to an exclusive California riding school; a professor inherits a mysterious vase... and a strange little man; a struggling youth discovers canine horrors lurking beneath the streets of Albany; a sheriff ruthlessly deals with monstrosities plaguing his rural town; a pair of animal researchers makes a frightening discovery at a remote site; a sweet little girl entertains herself... by torturing faeries; a group of horror aficionados attempts to track down an unfinished film by a reclusive cult director; a man spends a chill night standing watch over his uncle's body; a girl looks to understand her place in a world in which zombies have overrun the earth; a murderous pack of nuns stalks a pair of Halloween revelers...

What frightens us, what unnerves us? What causes that delicious shiver of fear to travel the lengths of our spines? It seems the answer changes every year. Every year the bar is raised; the screw is tightened. Ellen Datlow knows what scares us; the seventeen stories included in this anthology were chosen from magazines, webzines, anthologies, literary journals, and single author collections to represent the best horror of the year.

Summation 2010 by Ellen Datlow /At the Riding School by Cody Goodfellow /Mr. Pigsny by Reggie Oliver / City of the Dog by John Langan /Just Outside Our Windows, Deep Inside Our Walls by Brian Hodge /Lesser Demons by Norman Partridge / When the Zombies Win by Karina Sumner-Smith /--30-- by Laird Barron /Fallen Boys by Mark Morris / Was She Wicked? Was She Good? by M. Rickert /The Fear by Richard Harland /Till the Morning Comes by Stephen Graham Jones /Shomer by Glen Hirshberg /Oh I Do Like to Be Beside the Seaside by Christopher Fowler /The Obscure Bird by Nicholas Royle /Transfiguration by Richard Christian Matheson /The Days of Flaming Motorcycles by Catherynne M. Valente /The Folding Man Joe R. Lansdale /Just Another Desert Night With Blood by Joseph S. Pulver, Sr. /Black and White Sky by Tanith Lee /At Night When the Demons Come by Ray Cluley /The Revel by John Langan 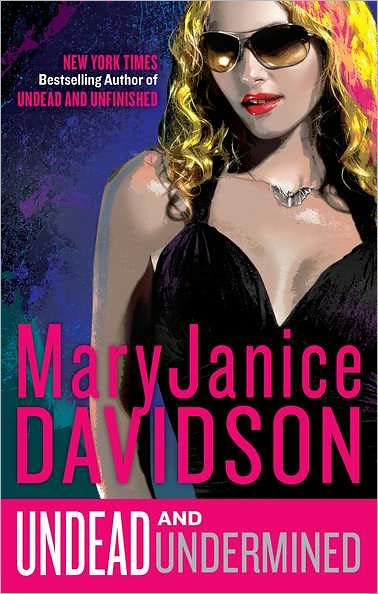 Undead and Undermined (The Undead Series - Betsy #10) by MaryJanice (Davidson (Berkeley, Hardcover 07/05/2011) – The continuing humorous adventures of Betsy the vampire.

Vampire Queen Betsy Taylor thought she couldn't die. So what's she doing in the morgue? It could have something to do with a time- traveling trip she made, and a foe with a wicked agenda that could finally be the real death of Betsy-if she's not careful. 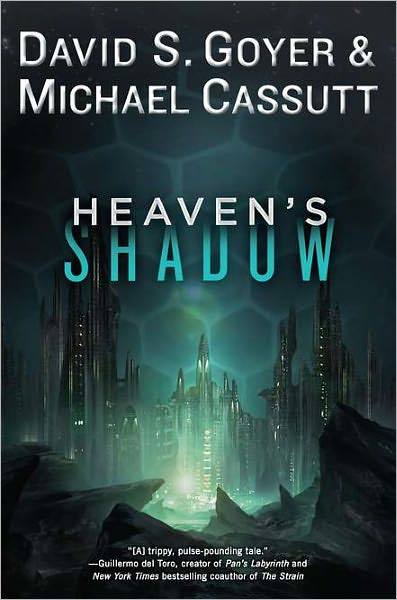 Heaven’s Shadow by David S. Goyer and Michael Casutt (Ace Hardcover 07/05/2011) – I know Casutt's work from his tenure writing for the defunct SciFi Wire and Goyer from his comic book work, and of course, his work on the Batman films. This seems an intriguing first contact novel.

The science fiction epic of our time has arrived.

Three years ago, an object one hundred miles across was spotted on a trajectory for Earth's sun. Now, its journey is almost over. As it approaches, two competing manned vehicles race through almost half a million kilometers of space to reach it first. But when they both arrive on the entity, they learn that it has been sent toward Earth for a reason. An intelligent race is desperately attempting to communicate with our primitive species. And the message is: Help us. 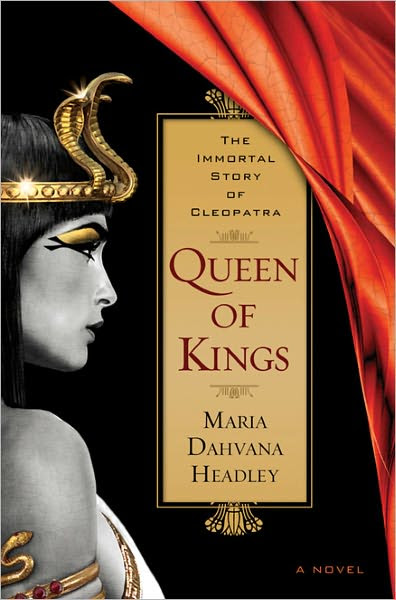 Queen of Kings by Maria Dahvana Headley (Dutton Hardcover 07/05/2011) – History and fantasy blend in this retelling of the life of the most famous queen/empress of all time – Cleopatra.

The immortal story of Cleopatra.

Passion and seduction, witches and warriors, and history and mythology combine to bring the timeless story of Cleopatra to life like never before in this stunningly original and spellbinding debut.

The year is 30 BC. A messenger delivers word to Queen Cleopatra that her beloved husband, Antony, has died at his own hand. Desperate to save her kingdom and resurrect her husband, Cleopatra summons the most fearsome warrior goddess, Sekhmet, and against the warnings of her scholars she strikes a mortal bargain. But not even the wisest scholars could have predicted what would follow...

In exchange for Antony's soul, Cleopatra is transformed into a vampiric creature of mythical proportions, an immortal shapeshifter with superhuman strength and an insatiable hunger for human blood-a being at once ferocious and seductive. And she is bent on vengeance against those who have wronged her family and her kingdom. Clashing against witches and monsters, gods and warriors, Cleopatra journeys from the tombs of Egypt to the great amphitheaters of Rome to the ancient underworld-where she will meet her love once again, and where the battle between man and beast will determine the fate of the world.

Blending history, fantasy, romance, and the supernatural, Queen of Kings is a masterful feat of the imagination that fans of Diana Gabaldon, Patricia Briggs, Philippa Gregory, and Neil Gaiman won't want to miss.

The Left Hand of God (Left Hand of God Trilogy) by Paul Hoffman, (NAL, Trade Paperback 07/05/2011) – This was pushed big time upon hardcover release in 2010, mainstream critics seemed to like it but aside from one or two reviews, the book was generally panned by genre readers/reviewers.

"Writers like Hoffman are too rare. This wonderful book gripped me from the first chapter and dropped me days later, dazed and grinning to myself." -Conn Iggulden, New York Times bestselling author of The Dangerous Book for Boys

Raised from early childhood in the Redeemer Sanctuary, the stronghold of a secretive sect of warrior monks, Thomas Cale has known only deprivation, punishment, and grueling training. When he escsapes to the outside world, Cale learns that his embittered heart is still capable of loving- and breaking.

But the Redeemers won't accept the defection of their prized pupil without a fight.

Chicks Kick Butt edited by Kerrie Hughes and Rachel Caine (Trade Paperback 06/07/2011 Tor) –This seems to be in the vein of Esther Friesner’s popular themed anthologies featuring powerful female protagonists, though this anthology seems to skew more towards Urban fantasy rather than epic/sword & sorcery.

CHICKS KICK BUTT showcases stories of chicks who are awesome --and never more so than when they are kicking some serious vampire, werewolf, demon AND monster butt.

The collection features tales from some of today’s finest, most electrifying writers like bestselling author Rachel Caine's tale from her Weather Wardens universe of a Weather Warden, her Djinn lover and a rash newcomer teaming up to foil terrorists in “Shiny”. Or Lilith Saintcrow's vampire on a mission who encounters a tortured werewolf that needs rescuing in “Monsters”. Other selections include Nancy Holder's “Beyond the Tale”, an enticing story of the Great Hunt and the secret society that defends against it, Karen Chance's half vampire, half human "dhampir" tackles Chinese gangsters in “In Vino Veritas”, Susan Krinard's “Mist” where the Norse gods and villains have been banished and return to wreak havoc and Jeanne C. Stein's chief vampire must battle the creatures of her past in “Superman”.

CHICKS KICK BUTT features one of the best things about the urban fantasy genre: strong, independent, and intelligent heroines who are quite capable of solving their own problems and slaying their own dragons (or demons, as the case may be). CHICKS KICK BUTT guarantees fun-filled, imaginative adventures with a strong woman leading the way!

...in the faraway land of Story, a Hugo-winning Editor realized that no one had collected together the fairy tales of the age, and that doorstop-thick anthologies of modern fairy tales were sorely lacking...

And so the Editor ventured forth, wandering the land of Story from shore to shore, climbing massive mountains of books and delving deep into lush, literary forests, gathering together thirty-three of the best re-tellings of fairy tales he could find. Not just any fairy tales, mind you, but tantalizing tales from some of the biggest names in today's fantastic fiction, authors like Gregory Maguire, Susanna Clarke, Charles de Lint, Holly Black, Aletha Kontis, Kelly Link, Neil Gaiman, Patricia Briggs, Paul Di Filippo, Gregory Frost, and Nancy Kress. But these stories alone weren't enough to satisfy the Editor, so the Editor ventured further, into the dangerous cave of the fearsome Bill Willingham, and emerged intact with a magnificent introduction, to tie the collection together.

And the inhabitants of Story, from the Kings and Queens relaxing in their castles to the peasants toiling in the fields; from to the fey folk flitting about the forests to the trolls lurking under bridges and the giants in the hills, read the anthology, and enjoyed it. And they all lived...

Jim and the Flims by Rudy Rucker (Night Shade Books Hardcover 04/26/2011) – Rucker has written a tetralogy of books, the Ware tetralogy, the first two of which were awarded the first and second Philp K. Dick awards.

Jim and the Flims is a novel set in Santa Cruz, California... and the afterlife. Acclaimed cyberpunk/singularity author Rudy Rucker explores themes of death and destruction, in the wry, quirky style he is famous for.

Jim Oster ruptures the membrane between our world and afterworld (AKA, Flimsy), creating a two-way tunnel between them. Jim's wife Val is killed in the process, and Jim finds himself battling his grief, and an invasion of the Flims--who resemble blue baboons and flying beets. Jim's escalating adventures lead him to the center of the afterworld, where he just might find his wife.

Can Jim save Earth with the help of a posse of Santa Cruz surf-punks, and at the same time bring his wife back to life? Jim and the Flims is the Orphic myth retold for the twenty-first century. Will there be a happy ending this time? 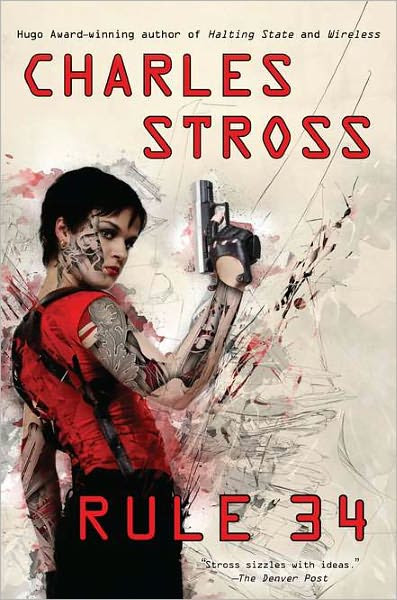 Detective Inspector Liz Kavanaugh is head of the Rule 34 Squad, monitoring the Internet to determine whether people are engaging in harmless fantasies or illegal activities. Three ex-con spammers have been murdered, and Liz must uncover the link between them before these homicides go viral. 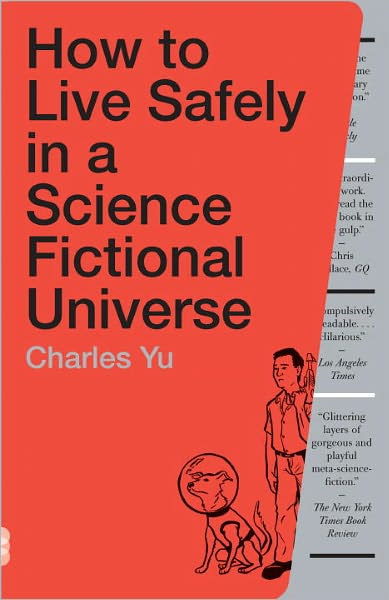 How to Live Safely in a Science Fictional Universe by Charles Yu (Trade Paperback 06/28/2011 Vintage) –Yaaay metafiction! The author is also the protagonist of this surreal SF novel. This also happens to be the third copy I’ve received after the ARC and hardcover.

From a 5 Under 35 winner, comes a razor-sharp, hilarious, and touching story of a son searching for his father . . . through quantum space-time.

Every day in Minor Universe 31 people get into time machines and try to change the past. That's where Charles Yu, time travel technician, steps in. He helps save people from themselves. Literally. When he's not taking client calls, Yu visits his mother and searches for his father, who invented time travel and then vanished. The key to locating his father may be found in a book. It's called How to Live Safely in a Science Fictional Universe, and somewhere inside it is information that will help him. It may even save his life.
at 6/05/2011

Email ThisBlogThis!Share to TwitterShare to FacebookShare to Pinterest
Labels: Ace, Books in the Mail, NightShadeBooks, Tor